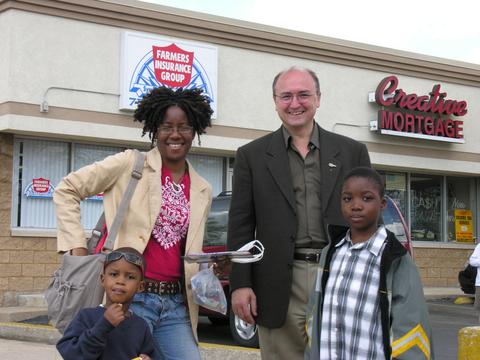 Commissioner Tony Perica was working the South Side of Chicago, on April 22, 2006, to bring aware to the Black Community his views on the issues. Pictured is the lovely Ms. Joyce and her two handsome sons, and Commissioner Peraica. Dave Madlener told me it is a matter of “Asking for the vote”, and “Showing Respect”. Tony was presented an award from Frank Avila for his Honest Government Service earlier in the year. On a personal note, Tony is very classy and down to earth. He always has a nice word for everyone. Contact the campaign at these numbers: 1-708-344-1600, 1-773-735-1700, or 1-773-684-1909. On line, www.VoteTony06.com Tony Peraica Clout rating: Plenty and getting steam. Photo by Patrick McDonough

3 Replies to “Peraica for Cook County Board President”