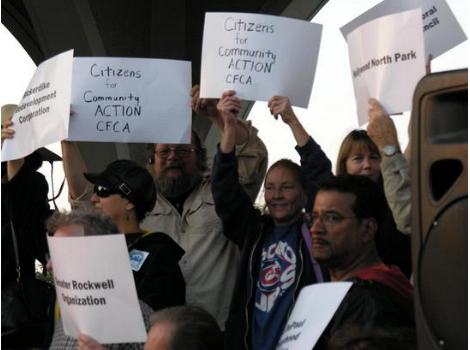 At most community events concerning the betterment of government you can count on Wayne Strnad’s participation and involvement. When my “since than reversed” termination with the City of Chicago Department of Water Management, Wayne stood by my family’s side to let people know the firing was a retaliation for my whistleblowing activities. Wayne was at the TRAC meeting September 14, 2006 to protest the massive tax increases in Chicago. Wayne uncovered massive vote fraud and claims Daley’s buddy Dick Devine (Cook County State’s Attorney) did nothing about it. Gee… you mean the same guy that hired Alexander Vroustouris runs a clout and corruption free office? Visit Wayne at.. http://www.citizensforcommunityaction.org/ Photo by Patrick McDonough

4 Replies to “Wayne A. Strnad Citizens for Community Action”