Mara seemed in a good mood after the Shakman Decree meeting today. Mara’s spokes person looked very pregnant. Well the Chicago Taxpayers picked up the tab for more illegal activity. Mara skipped the hangman noose after certifying the City of Chicago was in compliance of the Shakman Decree all these years. Why is Mara so happy? Thank you to Michael “Mike” Shakman for taking my phone call today. I thanked him for helping the Chicago City Worker. I also helped Channel 2 News get some footage of Mara and her posse leaving court. Photo by Patrick McDonough.

Thank you to Chicago Department of Water Management Employees Patrick McDonough, Bruce Randazzo, and Frank Anton, noting objections during the Shakman Meeting in Federal Court today. Judge Anderson listened to everything we had to say. The AP also met with us after we voiced concerns on ongoing Shakman violations. Judge Anderson invited us to get involved, and we will continue to talk up for the thousands of Chicago Workers afraid to voice their opinion. Do we live in Communist Russia? Photo by Patrick McDonough

I went to many Memorial Day Parades in Chicago and the Suburbs. Mayor Daley was crying like a baby as Fitzgerald skates around Mob Boyz. Many of the people that join the armed forces serve our country for the highest purpose, they do not serve to pad the resume. I heard many politicians try to get some traction by talking about some soldier that died serving his country. I listened to story after story about a Mom or Dad tell noble stories about their son’s life before they died in war. Many parents tried to justify with stories their son told them to reassure them everything will be o.k. Mom and Dad, your sons will be sent to the front lines and die, keep them home. Photo by Patrick McDonough.

Make darn sure you read this article ducked in the business section of the Chicago Sun-Times. It was written by Fran Spielman, click here: http://www.suntimes.com/business/399667,CST-FIN-merge24.article Than read this future tidbit about Father Phleger of St. Sabina’s helping city workers get promoted. Divine Intervention!

Irma Jasso-Rodriguez began her career with the Building Department as a building inspector in March 1993 and worked as an inspector until December 1997. She was then promoted to Supervisor of Central District where she worked from December 1997 until June 2003 when she was promoted to Chief of the Central and West District. Irma is the first woman to be promoted to Chief in the Department of Buildings and the only Chief in charge of two districts, Also in the year she has held the position she has developed an inspectors guide that is used by all City of Chicago Building Inspectors. We salute Irma for raising the bar! Gooooo… Irma.
KEVIN BUSH
In the offices of the technical bureaus at Ogden, Kevin Bush has been promoted to Deputy Commissioner of Technical Bureau, who recently served as the Chief Plumbing Inspector. Away from work, Kevin serves as an assistant coach for the Hales Franciscan High School basketball team Making Coach Bush very proud, the Hales Franciscan Spartans brought home the 2003 State Class A Championship, the first Chicago area team to win a Class A title since 1985 against Mount Carroll. In addition to coaching the Hales Franciscan Spartans, he also heads up a summer program for disadvantaged teens at St Sabina Church called Fermri Basketball, Kevin is still basking in the glory of winning not only the 2003 State Championship but also bringing home the 2004 Nike National Invitational
Championship for the Ferrari basketball team, held in : Orlando, Florida Way to go Coach Bush!
Please get to know these superstars Chicago Employees!!! Patrick McDonough

The victim received some cash, lots of cash, and did not show up to court. I think it smells like a bribe and settlement. We need to force this lady to pay for all the grief she cost the taxpayers. Cook County’s justice system is not a matter of integrity, but a matter of “How much”. How Devine! Frank Coconate lost another round on this , money buys “Justice” in Chicago. 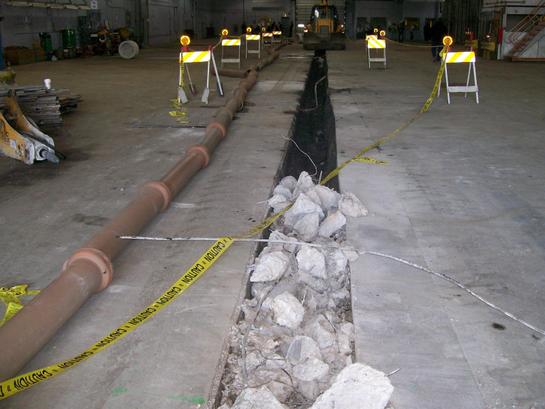 Last week, the Chicago Department of Water Management decided to take upon itself to attempt to make plumbing repairs to the facility at 3901 South Ashland. Some sewer workers broke open a trench drain and started making repairs to a system in dire straights. Of course you need a licenced plumber and a licensed plumbing contractor to make the repairs. You need to make sure you use the right materials, make sure there is correct pipe sizing, and make sure the taxpayers are not shortchanged. When the pipe size is too small there will be more back-ups. Some of the waste going into the sewer should be intercepted first. We need to display permits before work begins. We need to find out who is allowing work like this illegal installation to continue. Remember sewer workers are allowed to work on piping five (5) foot past the foundation. Caulkers are not Plumbers and should not perform work that requires a Licensed Plumber. A Plumbing Inspector from the City of Chicago was dispatched yesterday to investigate the violations. Major amounts of Taxpayers money was wasted on this improper installation. Photo by Patrick McDonough after work to protect the heath of the Chicago Worker.

Michael Tadin swore off public funded trucking after his fun and games with Mayor Daley’s Hired Truck Scandal. Tadin had several companies fronting with different names and had non-union workers. To this day, the Chicago Teamsters need to make sure everyone of almost 300 employees of Tadin are union. Tadin has had numerous sweetheart deals thanks to Mayor Daley. Tadin is into Waste Removal/Transfer with Waste Management ( Hello Feds!!!) Today they continue with Walsh Construction in the Dan Ryan Repairs. Tadin was spotted with additional pieces of equipment on the State funded construction project. The Inspections by the State are at best lousy and the only trucking company that got busted was a Chicago black owned enterprise. (Owned by a former Chicago Bear) Tadin made millions in a shady manner, low paying his workers. Mayor Daley, how did your pal Tadin get back on the State Payroll. John Daley could also help us with that question. Photo by Patrick McDonough

Every morning I watch a Chicago High rise complex slowly destroyed. I kept taking pictures for quite some time as the building at 37th and the Dan Ryan Expressway is slowly hit again and again with the wrecking ball. These are very well built buildings, but if you really think Daley want Negroes on prime Chicago property, you need your head examined. The 11th Ward is becoming very prime property and white folk do not want to see Negroes around their million dollar homes near the slaughter houses in Bridgeport. The exception might be the low income housing at Wentworth Gardens. Many of the Negroes in that development I talked to told me there is an unwritten rule, “Do Not Cross Under the Railroad Tracks just west of the Wentworth Gardens”. “We stay here”, said another Negro. Maybe one day, Mayor Daley’s Bridgeport will start to respect Black Persons as equals. Patrick McDonough.

Today, I spent a great day in Wind Lake with my three sons. We had the honor of Safety training and tips from Rob Robins, a firefighter, EMT, and Dive Team member. In smaller towns, a firefighter must wear more hats, so we salute Rob Robins. We had a closeup look at all the many boats, trucks, and ambulances used to save lives. I learned about heart attacks, and God knows we have had more than our fair share at the Chicago Department of Water Management. Remember, spend time with your children in constructive learning events, and less time gambling and drinking. Photo by Patrick McDonough.

I am happy to spend time with my sons walking down the paths of the Cook County Forest Preserves. When I was taking photographs for Forrest Claypool primary campaign for democrat board president, I was surprised at the poor condition of many of the preserves in Chicago. Lots of work needs to be done to make park areas safe and beautiful. I hope all of Chicago Clout Fans take the time to take your children on a pleasant walk many times this summer. The paths are in o.k. condition. Photo by Patrick McDonough.