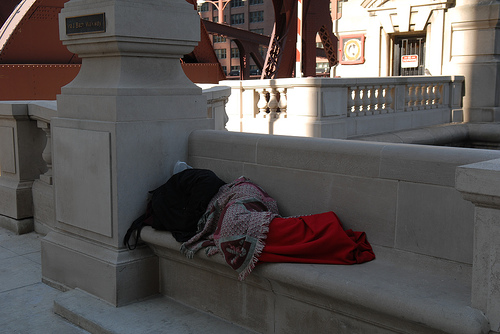 While Congressman Jesse Jackson Jr. and other politicians were pouring water into the Chicago River to protest Mayor Daley’s proposed tax increases, a homeless person in the street takes a nap. Mayor Daley’s Administration has greatly underestimated the homeless problem in Chicago. I really wish all the bottled water the politicians poured into the Chicago River, would have been given to a Homeless Shelter instead. Remember it is getting colder every day in Chicago, please donate to the Homeless and Voiceless. Photo by Patrick McDonough