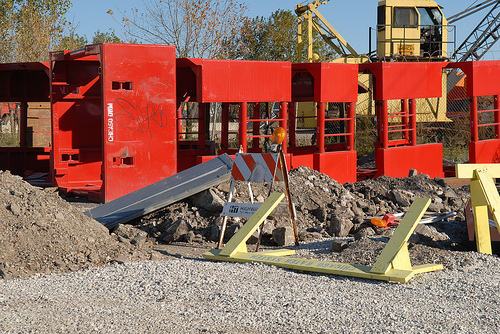 On October 30, 2007 at 4:30 p.m., Chicago Department of Water Management had some additional instructions on Trench Safety. Prior to the meeting, I discussed trench safety with Jesse Canet, a foremen in the North District. Jesse was concerned about “Production”. As we all know, trench safety has been one of my most major concerns at the Chicago Water Department. It took years to update this department into the new century. I had many spirited conversations with Foreman, District Foreman, and Superintendents, demanding Job-site safety for Chicago City Workers. I was alone and called a “Troublemaker”, but in the end, declared victory. Many people in the meeting brought up many concerns, but I am happy to report, Arnold Coleman made it clear by saying, ” YOU ARE GOING TO MAKE IT SAFE”. The meeting was given by Water’s Safety Department employees, Mark Holder, Alice Carter, and William Coclanes. Chicago has a one year agreement with the State of Illinois Department of Labor, to get the Water Department in compliance. I was proud to be the only “Competent Person” at the meeting, so I think we better get all employees certified A.S.A.P. Remember, in the long run, Chicago Taxpayers will benefit by saving millions in workman comp claims. Special thanks to Fran Spielman for making this a public issue at the Chicago Sun-Times. Also thanks to James LoVerde for sending me to the classes. Photo by Patrick McDonough.