Please enjoy this picture of Alderman Howard Brookins and my daughter Brigid McDonough. Alderman Brookins is hoping to be the next States Attorney after Dick Devine. I know this race is up in the air, but good luck. http://www.aldermanhowardbrookinsjr.com/ Photo by Patrick McDonough

Chicago Clout is a political website that closely observes the use of Clout in Chicago. Clout is a powerful weapon than can be used to make citizens lives better. Clout can be use in the wrong manner. I am pleased to recommend Commissioner Frank Avila to return to the Metropolitan Water Reclamation District of Greater Chicago (MWRDGC). The body has performed well with very little controversy. Commissioner Frank Avila has a wonderful family and two children that are advocates for those without a voice. Audrey Avila made a webpage about her father, my space profile Commissioner Frank Avila has also allowed children to learn more about the Environment through Cable Access Shows. Patrick McDonough

Remember, if you sleep through a broken water main, millions of dollars of damage will occur. This broken water main at Wolcott and Montrose will cost a fortune to repair. I was amazed at all the workers waiting around to do something. To leave all these city workers standing around doing nothing is mismanagement. It might look good for the night news, but the cost is staggering. I hope when that piece of pipe is cut out, Spatz will investigate the cause. If the broken pipe is left in the yard rusting like the Lincoln Park Water main break, nothing will be learned. This is the type of water main break where an expert like James LoVerde should have taken command. Why is he retired and not on the public payroll like the other political hacks at water partners. Photo by Patrick McDonough 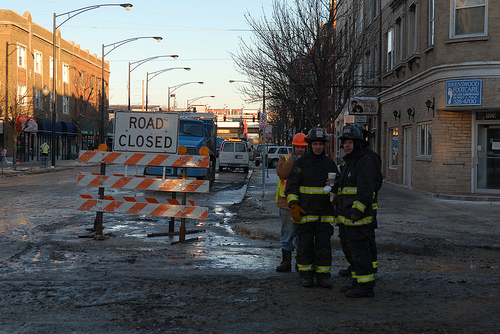 Blocks away from the Ravenswood broken water main is a group of Chicago Firefighters. The damage from the broken water main spread for blocks because someone in charge refused to understand the seriousness of the water main break. We need personnel to either give this control back to the district level or make management go out to the job-site and determine the seriousness. The need for all these extra support staff proves the lack of professionalism in the North District Department of Water Management. Remember, a former Deli Manager at Jewel, is not a licensed plumber, although the taxpayer pays them the same amount of money. Time to take the politics out of the North District. Photo by Patrick McDonough.

The City of Chicago Department of Water Management North District dispatched an Investigator Crew last night. The crew called in the emergency and the person-in-charge did not authorize a crew to respond to the major emergency. After a three day weekend overtime feast consisting of time and one half, double time, and triple time, a choice was apparently made to not respond to this major emergency in a timely manner. I hope someone from the Mayor’s office reviews the time from the first 311 and or 911 call was made, until this 36 inch feeder main was shut down. I also want to know if personnel from the Central district was dispatched due to incompetence in the North District. I want to know when the Emergency Shoring was dispatched to the job. It was not. I want to know who let this get this far out of hand. I ask you, if Patrick McDonough was making repairs to 48 inch water mains all by himself, why does this water main repair require, the Fire Department, including a Command Center, the Gas Company,, the Electric Company, Streets and Sanitation Crews, Tow Trucks, The Sewer Department, Orange peels, vactors, Semi Trucks, Layers of Politicians, (I mean Water Department Management), Chicago Police, Traffic Aides, to name a part of the support staff. Bottom line, Incompetence cost money every time. According to Newspaper reports, the Department of Water Management has a monitoring system to avoid these breaks. These non-union companies are a scam deluxe and wasted money. They hire kids and workers that sleep while on the public dime. Who is getting a piece of that deal Boyz? The Chicago Inspector General is useless to regulate anything, so just pay more in taxes Chicago! The Montrose and Walcott water main break damage should have been avoided. Photo by Patrick McDonough.

Thanks for the fun and the kindness. Patrick McDonough

The State of Illinois must continue to enforce the protection of Whistleblowers. The Chicago Whistleblower ordinance is a bust. Please read the article below from the Chicago Tribune. Patrick McDonough. END_OF_DOCUMENT_TOKEN_TO_BE_REPLACED