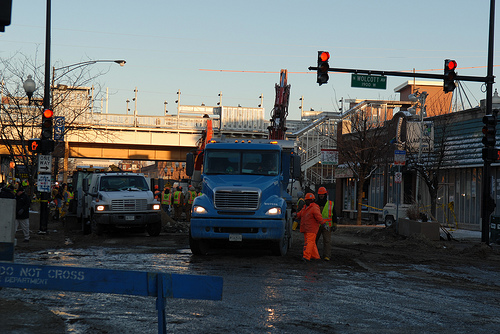 Remember, if you sleep through a broken water main, millions of dollars of damage will occur. This broken water main at Wolcott and Montrose will cost a fortune to repair. I was amazed at all the workers waiting around to do something. To leave all these city workers standing around doing nothing is mismanagement. It might look good for the night news, but the cost is staggering. I hope when that piece of pipe is cut out, Spatz will investigate the cause. If the broken pipe is left in the yard rusting like the Lincoln Park Water main break, nothing will be learned. This is the type of water main break where an expert like James LoVerde should have taken command. Why is he retired and not on the public payroll like the other political hacks at water partners. Photo by Patrick McDonough