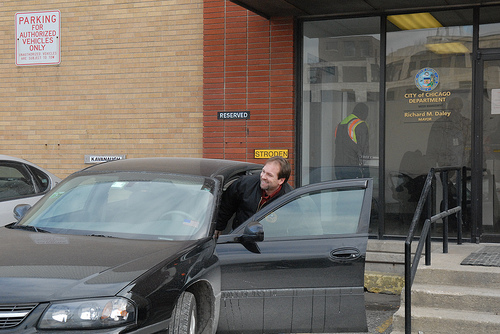 This morning, the Chicago Department of Water Management Central District lost one of its most valuable assets, James Stroden. James Stroden had a wonderful table of donuts, bagels; loyal employees were sad and upset at his transfer to the South District. The Central District oversees some of the most critical real estate in the City of Chicago, including Chicago’s Downtown. I am concerned when an employee that has the commanding respect, admiration, and loyalty from employees, changes command to a less important battlefield. I know when James Stroden ordered you to an assignment his intentions were honorable. When you brought an issue or concern to his attention, you would get a straight answer, like it or not. I only remember one employee that had a gripe with him, but the disagreement was treated with utmost respect and resolved. I admit he is a great leader and a wonderful family man, maybe he should move out of the 11th Ward. (Joking) Good luck and God Speed Mr. James Stroden. Patrick McDonough

6 Replies to “Get back to the Central District Mr. James Stroden”