The City of Chicago Taxpayers paid for a slew of high price lawyers investigating allegations of improprieties by the Chicago Department of Water Management employees in the North District. One employee was Paul Hansen, the son of Bernard Hansen, a retired Chicago Alderman, now a registered lobbyist in Chicago for a up and coming bank. Paul Hansen sure moved up the chain of command mighty quickly prior to the FEDS moving in on Shakman Violations in Chicago. Yesterday, Paul Hansen gave a big huggly snuggly to a high ranking Water official that just experienced an unfortunate loss of a family member yesterday. At least one interview was held in Donald Tomsczak's old office which was quite ironic. I am concerned said one source; Mayor Daley should only have us talking to lawyers employed by the City. This bill should be a whopper, but due to Chicago record high gas prices, Chicago taxpayers will pick up the tab one way or another. Patrick McDonough.

As many of you know (oops, you do not) Alderman Banks is on vacation for two weeks. I asked if Alderman Banks asks for favors on behalf of caulkers in the Chicago Department of Water Management's North District. I also asked if they ever violated the Shakman decree. I am happy to say they responded, "they abide by the Shakman Decree explicitly". Mike S. stop asking for favors or they will report you! Get your tools and do your job! More on this later! Patrick McDonough.

Over one year ago, a member of Chicago’s Building Department was nearly at the end of his rope. Michael McGann and I have a mutual friend, Michael J. McDonough, my father. Mr. McGann has more information on the massive fraud at the building department than anyone I have ever met. After several conversations, I knew Michael’s revelations were beyond my limited resources. I asked Frank Avila, Jr. to meet with us, and funny enough a meeting was right across the street from Chicago’s City Hall. I was trying to get a foothold into the “Facing” scams that included Chicago Department of Water Management, Chicago Building Department, and various Chicago Department that looked a blind eye to the building explosion in Chicago. Simply put, a building is completely remodeled with no permit, including massive buildings. After all the work in the building is completed, HVAC, plumbing, electrical, carpentry, structural, and drywall is completed, a permit is applied for a minor repairs to the front of the building, new windows, tuck-pointing, and doors. Cash changed hands like a Las Vegas Brothel. This has cheated taxpayers out of millions of dollars in revenue. The Yuppies in Chicago bought properties that have been shortchanged in every manner possible. When I called for inspections nothing was done. When I called a reporter to investigate this scam, nothing was done. Thanks to Michael McGann and Frank Avila, a new level of professionalism was brought to our new organization. Michael McGann was punished for his whistle-blowing activities. Mario Olivella, the very boss that tried to undermine Michael credibility was just indicted. I am looking forward to Mr. McGann’s upcoming hearing at the Chicago Department of Human Resources, Monday June 9, 2008 at 10:00 a.m. I look forward to Frank Avila asking Mario and the Boca Raton Las Vegas Boyz questions they might not want to answer. I am going to video tape the event for your pleasure. On a personal note, Michael McGann has brought a new level of professionalism to our fight to give the Chicago taxpayers a square deal. The hundreds of pages of evidence should make even Mayor Daley squirm. We have many more surprises for you soon. Mayor Daley has promoted people with gambling problems and they in return have promoted those with the same bad habits. Remember this my whistleblower friends, contact us at chicagoclout@gmail.com you might be entitled to reward money. My highest regard to the Chicago Inspector General, you are heroes. I see the leaks have been removed. I also look forward to the officials at Journeymans’ Plumbers Local 130 and the Bureau of Licensing help us with this mess; let’s not hide on the sidelines! Make sure you call Alderman Banks and let him know his plumbing inspector replacements just interviewed to replace these bums.Right W**** and M*** and D***? Photo by Patrick McDonough.

Chicago Clout has pictures of most of the famous politicians, judges, and lawyers in Chicagoland. One young lady has made the honor to grace our website as I know she is a future leader in the Chicago Law Community. Audrey Avila has graduated from Chicago-Kent, class of 2008 with her Juris Doctor Degree. With all the Chicago City Workers that get in hot water, I hope Audrey will join Frank Avila Jr. at his Downtown Law practice. (I pray she does) Audrey is the daughter of Commissioner Frank Avila (MWRDGC) and Sherry Avila a famous Irish singer. I look forward to watch Audrey in court fighting for justice. Patrick McDonough

Please hang in there until we get Chicago Clout fixed up. We have a new webmaster and we have many advertisers. I hope you support WBBM Channel 2 News in Chicago. I did not have them advertise prior because of the possible conflict of interest. Dave Savini is one of Chicago's top Investigators and working with him was a pleasure. People have died in fires from the lack of any water in the Fire Hydrant. I have had lawyers contact me for more information. The funds from this website will go towards our new webmaster and the improvement of video equipment. We will also give a large sum for legal assistance to Municipal Workers that are in a bind. Please hang in there with us. We are also preparing a donate section so you can help us help others. Lawyers such as Frank Avila, Ivan Tomic, Russ Stewart, and Loevy and Loevy, have helped with fees for those less lucky. Fees for legal review and research have been funded out of Victor Crown and my pocket. I hope you donate because you might need this service in the future. Patrick McDonough. 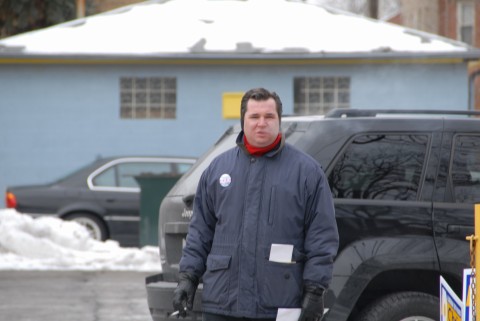 James D’Amico, brother of State Rep. John “Hired Trucks” D’Amico and nephew of the Laurino Clan, enjoys a cigarette while getting out the vote. The States Attorney was called because the D’Amico boys get mighty close to the entrance doors during the elections. I am glad to see Todd Stroger picked a smoker to handle medicial issues for the County. Aunty Laurino must be proud of her Clout boys. Exhale James D’Amico. Please read the extended post, click below! Photo by Patrick McDonough.]]> END_OF_DOCUMENT_TOKEN_TO_BE_REPLACED

Make sure you read about the D'Amico family. I will have more on this later. Maybe they thought I forgot about the Kilbourn and Elston Election Day miracle! It is a Sokol Community Center visit by the States Attorney during election day that brings back those dreams! END_OF_DOCUMENT_TOKEN_TO_BE_REPLACED

Angelo Fata has his cup overflowing with the City of Chicago and Teamsters Local 726 disputes. First Angelo and a group of very talented friends attempted to replace the current leadership at Teamsters Local 726. A major investigation is in progress and the vote results are now disputed in federal court. A fellow Chicago employee allegedly sexually assaulted Angelo. This action was sustained to be a violation of the City of Chicago Policy on Sexual Harassment. Andra Gomberg, a Sexual Harassment Officer ruled in Angelo’s favor. Also, John “Jack” Hurley was on City of Chicago property, assaulted Angelo just prior to an upcoming election. I am a witness to the assault by the Union official. In both cases witnesses were present and came forward. The City of Chicago Department of Water Management has many cases of workplace policy violations. Angelo A. Fata has the good fortune of becoming the client of Frank Avila Jr. A major lawsuit is underway. Some employees at the Chicago Department of Water Management think the old way of business will continue, sneaking out of trouble by calling an Alderman and waiting for a Statue of Limitations to expire. Hold your breath if you are mad, treat your co-worker with respect. Photo by Patrick McDonough

The City of Chicago is erupting in violence and we demand solutions now, Mayor `Dick Tater` Daley and Jody ` Eyeballs` Weis are going to purchase weapons like machine guns and war wagons to quell the violence. Millions will be spent on “experts” and consultants. The Governor of Illinois is now getting into the act. Remember, Chicago Clout warned Chicago about the impending doom long ago. Patrick McDonough, a plumber for the Department of Water Management works on the west side of Chicago, saw the trend of violence early on. I was happy to hear from Reverend James Allen, an emerging leader that has solutions to the problems in the street. I am hoping Frank Avila, the host of Chicago Clout will make time for a Can-Tv show soon. The Daley Administration needs to sit down with Reverend Allen and assist him with his desire for a peaceful end to the violence in Chicago’s streets. I am not happy with the continued failures of this administration. Contact my Westside friend and help with a peaceful strategy. Mayor Daley want the guns off the streets, I suggest finding out who is supplying the drugs first and let’s get some good jobs for the kids.
Please help: Revered James D. Allen Folks and People Nations (Strategy for Peace) 773-378-6775 or SEACInternational@teamfca.com Photo by Patrick McDonough

Joe Moore is a Chicago alderman that put up a fight to save ducks that are forced fed food to expand their livers. This rude and crude practice is shameful. Imagine an 11th ward hillbilly like Daley stuffing Foie Gras past those mangy teeth while passing out millions to his friends. I want people to know, this is a sin. God’s animals were put on this earth for a reason. Just like dog fighting, animal cruelty should not be allowed. Someone should tell that phony Daley to go back to the 11th Ward and eat at those 39th street eateries. You can put a suit on a redneck, but a hillbilly is a hillbilly. Alderman Joe Moore is a hero that fought for what is right. Photo by Patrick McDonough