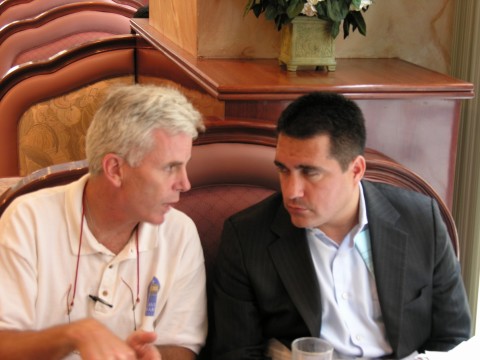 Over one year ago, a member of Chicago’s Building Department was nearly at the end of his rope. Michael McGann and I have a mutual friend, Michael J. McDonough, my father. Mr. McGann has more information on the massive fraud at the building department than anyone I have ever met. After several conversations, I knew Michael’s revelations were beyond my limited resources. I asked Frank Avila, Jr. to meet with us, and funny enough a meeting was right across the street from Chicago’s City Hall. I was trying to get a foothold into the “Facing” scams that included Chicago Department of Water Management, Chicago Building Department, and various Chicago Department that looked a blind eye to the building explosion in Chicago. Simply put, a building is completely remodeled with no permit, including massive buildings. After all the work in the building is completed, HVAC, plumbing, electrical, carpentry, structural, and drywall is completed, a permit is applied for a minor repairs to the front of the building, new windows, tuck-pointing, and doors. Cash changed hands like a Las Vegas Brothel. This has cheated taxpayers out of millions of dollars in revenue. The Yuppies in Chicago bought properties that have been shortchanged in every manner possible. When I called for inspections nothing was done. When I called a reporter to investigate this scam, nothing was done. Thanks to Michael McGann and Frank Avila, a new level of professionalism was brought to our new organization. Michael McGann was punished for his whistle-blowing activities. Mario Olivella, the very boss that tried to undermine Michael credibility was just indicted. I am looking forward to Mr. McGann’s upcoming hearing at the Chicago Department of Human Resources, Monday June 9, 2008 at 10:00 a.m. I look forward to Frank Avila asking Mario and the Boca Raton Las Vegas Boyz questions they might not want to answer. I am going to video tape the event for your pleasure. On a personal note, Michael McGann has brought a new level of professionalism to our fight to give the Chicago taxpayers a square deal. The hundreds of pages of evidence should make even Mayor Daley squirm. We have many more surprises for you soon. Mayor Daley has promoted people with gambling problems and they in return have promoted those with the same bad habits. Remember this my whistleblower friends, contact us at [email protected] you might be entitled to reward money. My highest regard to the Chicago Inspector General, you are heroes. I see the leaks have been removed. I also look forward to the officials at Journeymans’ Plumbers Local 130 and the Bureau of Licensing help us with this mess; let’s not hide on the sidelines! Make sure you call Alderman Banks and let him know his plumbing inspector replacements just interviewed to replace these bums.Right W**** and M*** and D***? Photo by Patrick McDonough.