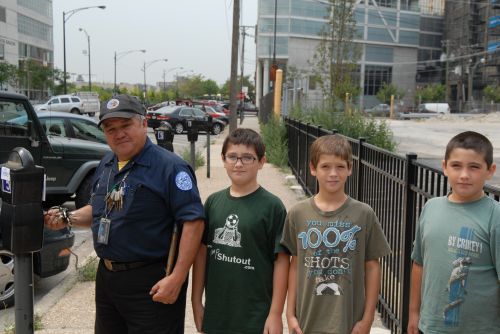 Yesterday I had fun with my sons in downtown Chicago. Whenever I have time, I make sure I spend it with my children. My kids were quick to learn the tow trucks in Chicago run day and night. We watched tows in private lots also. The picture includes a Chicago Revenue employee, Michael, Patrick, and David McDonough. Mayor Daley has these city workers going almost non-stop. I am going to do a story on how Mayor Daley is having private towing companies (pony up for Barack Obama please) assist Revenue agents tow trucks. Many of these tow truck companies are located in the suburbs. Most of Mayor Daley’s Chicago Department of Revenue employees work very hard at a difficult and dangerous job, but if you think Chicago millionaires want extra cars in their neighborhood, you are sadly mistaken! Watch out Chicago, the orders are out to crank out the tickets and tow the cars. Do you think Mayor Daley will privatize the parking meters? I do not think the 11th Ward would allow a cash business to slip out of their hands. Photo by Patrick McDonough