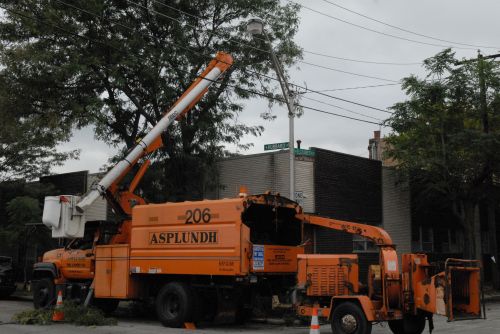 Today at Hubbard and Elizabeth, a suburban contractor takes work from the Chicago City Worker. The contractor is from Bourbonnais, Illinois, what ward is that Daley? Mayor Daley, I know you need to raise money for Barack Obama, I know the Chicago City Worker are not kicking in for the phony tickets and cash shakedowns like your good old days, but this is a joke. The Bureau of Forestry has cheated City workers out of overtime this last storm because you said the City is 420 plus million in the hole and you put a private contractor on the taxpayer’s payroll? Who is going to get a little something for that arrangement? It seems to me Chicago City workers get the shaft again. This company had an army of dudes servicing the near north side of Chicago; I hope Daley does not send these guys into the rough neighborhoods like the Chicago City Worker! The guy in this truck was resting, thank God he is not a City worker with the I.G. following. Photo by Patrick McDonough