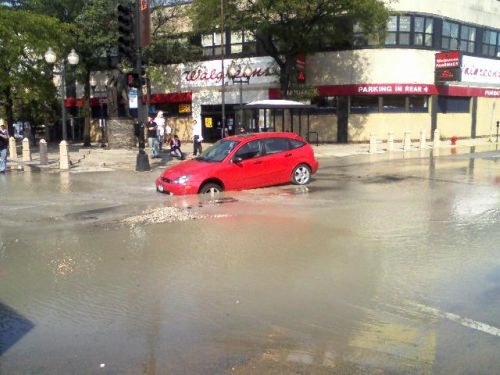 Car damaged by hole created by water main break
September 23, 2008
A car was damaged after partially falling into a hole created by a water main break in the North Side Albany Park neighborhood Tuesday afternoon.
City Department of Water Management spokesman Tom LaPorte said crews remain on the scene as of 5:45 p.m. repairing the damage near the intersection of Lawrence and Western avenues, where an 8-inch water main broke earlier Tuesday afternoon.
“When the main broke, the water undermined the pavement and soil and created a hole,” LaPorte said. There was a car parked near the hole and it partially fell into the hole. How badly the car was damaged was unknown, because it had already been towed away before city crews arrived, he said. Traffic was slowed but not stopped in the area late Tuesday afternoon, LaPorte said, and no water customers were affected by the break. He had no time estimate for the repairs. Thank God Patrick McDonough was there to shut of the water main. Nice job boss! Photo by Patrick McDonough