Please click here to enjoy the News footage of last night news. http://www.myfoxchicago.com/myfox/pages/Home/Detail;jsessionid=38DB1518CE2EA35CED12F1A525A5691C?contentId=7710435&version=1&locale=EN-US&layoutCode=VSTY&pageId=1.1.1&sflg=1 How do you get over a major Chicago flu? I was ordered (via subpoena) to show up and wait to testify as a witness after the City of Chicago gave some punishment to Michael McGann. I will talk more about the events in detail later. When the City’ witness was on the stand he answered the questions, and when Frank Avila got a hold of him, it sounded like a knife fight. I wish I could hear, but that is against the law. Someone should have told the witness because he was on the phone during breaks telling someone the progress. That is not nice. I am sick as a dog from that day. I am glad the Chicago Media is more aware of the crimes against Chicago City Workers. Patrick McDonough

Joe you are an ass. You do not have a plumber's license so you are Joe the phony. Do not call yourself a plumber, you are not a Plumber. I am a Plumber, you bum. Patrick "Pat the Plumber" McDonough.

I used to work for this company but they went broke. They hired me because they needed a licensed plumber on the jobsite. They were caught by a plumbing Inspector actually doing his job. If you look around Chicago, Mayor Daley is spending billions on private contractors while he readies to lay off Chicago City Workers. My website told you a long time ago Chicago is broke. The debt Chicago has is really well over 500,000,000 dollars. Now is the time to come forward with the truth if you want to save your job. It has been easy being Mayor in Chicago when the money rolled in, now Daley is under intense pressure and will soon buckle. If Mayor Daley fires anyone, I will be proven correct on every aspect of his leadership. I also wrote months ago about the crime wave that would hit Chicago this year, I was correct again. Mayor Daley has new water mains installations going full blast around Chicago. Open your eyes, Daley’s construction pals are making a mint and getting paid in a preferential manner. Times were so good before, Mayor Daley’s son Patrick was in the sewer business. Enjoy Patrick McDonough

Chicago Garbage men and women are under attack by the Chicago Inspector General. Make sure you read this article by Fran Spielman. The all new Chicago Inspector General is developing a reputation under David Hoffman for giving a better bang for a buck. My biggest problem is Mayor Daley purposely underfunding both the I.G. and the Chicago Police Department. Yesterday, the Chicago City Council approved a multi-billion dollar Midway Airport deal. I just do not understand why these Aldermen in Chicago just do not do their jobs. Daley has been handed too much power, the checks and balances are just not in the system. This Alderman has a part time job with full time pay. I have advocated for a long time the large amount of Aldermen in Chicago, this dilutes their power. We need just 25 Aldermen, not a single one more. Back to the trash men and women in Chicago, I do not fault you for taking needed breaks; you deserve every penny you receive. If you have ever followed behind a garbage truck in the summer, the smell from rotten food, watching the sloppy water gush around, maggots and filth is enough to make a sewer worker gag. If you need a break take one. Daley will use this to advance his anti-union cause, which is a shame. I have watched Garbage men and women drive down narrow streets earning every penny they get. Private non-union trash haulers in the suburbs will not have to live in the City of Chicago, they will not be required to abide by the Chicago Residency requirements. The Inspector General have never verified the 50% residency laws private contractors must abide by, and they have never punished private contractors that provide false and misleading addresses. I hope when the smoke settles, David Hoffman looks at all the bosses of these workers and fire these 11th ward bums. I also hope the ones drinking on the job and sitting at home are also fired. Mayor Daley misuses his office, having the wealthy pay his way all over the globe, so the workers are following his selfish example. I think the I.G. should be given the power to investigate the Aldermen now, this chap is making over $100,000.00 a year eating breakfast, while the poor Mexicans in his ward are losing their homes.]]> END_OF_DOCUMENT_TOKEN_TO_BE_REPLACED 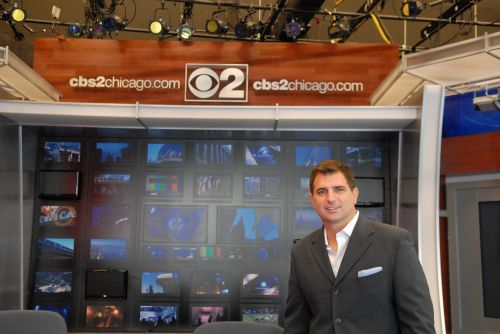 Dave Savini is one of the most trusted reporters in Chicagoland. I visited the new studio close to Chicago City Hall and went through all the new floors on block 37. CBS channel two news had some reception issues as the suburbs expanded. This cost some customers. I get the feeling when the digital law transfers soon, the signal problem that was a disadvantage for so long might make this station a comeback kid. Many of Chicago’s channel two stars were very polite to me. I also met the big boss, Mr. Ahern and he was very nice. I sense CBS 2 News in Chicago is very hungry to become the top station again. Please make sure you read and watch the video of the beating Chicago School kids took from teachers. Here: http://cbs2chicago.com/investigations/cps.chicago.public.2.835842.html These teachers belong in jail. Thank you to Mr. Savini and his wonderful Investigative Producer Michele Youngerman. Thank you again for the visit, the new station is state of the art!!! Photo by Patrick McDonough.

It was not fun and games for several current and former Chicago City workers today. They met with prestigious Park Ridge Attorney and columnist Russ Stewart to forward their complaints in front of Federal Judge Joan B. Gottschall at the Dirksen Federal Building. Please note from left to right, Terry Doherty (former laborer Chicago Department of Water Management) Thomas McDarrah (Bricklayer foreman) Charles Walker (former Building Department Inspector) Steve Collier (former DWM engineer) Attorney Russ Stewart John Sweitczak (Plumbing Inspector), Bruce Randazzo (DWM teamster) Victor Crown (legal research). These men suffered adversities during their employment at the City of Chicago, despite the laws to protect them. The men will fight for all Chicago City Workers. Many more current employees are subject to their day in court, please contact me so I can schedule your petitions and get you in front of a Federal Judge. This complex legal strategy was perfected and implemented thanks to the efforts of the Municipal Advocate General Directors Patrick McDonough, Michael McGann, John Sweitczak, and legal researcher Victor Crown. Meetings with attorneys Mr. Russ Stewart and Frank Avila Jr., Ivan Tomic, and Rachel Goodstein explored several legal angles. I was surprised at all the money the City of Chicago is spending on private law firms to defend these cases. I think Chicago City lawyers should defend the taxpayers. I wish all these people good luck and I am proud of all of them exercising their legal rights. Photo by Patrick McDonough.