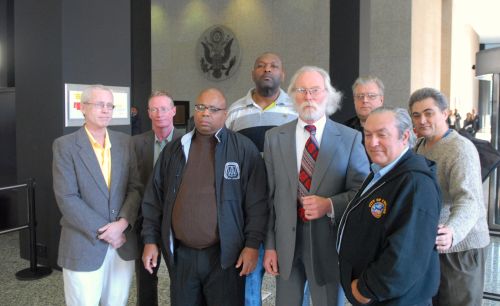 It was not fun and games for several current and former Chicago City workers today. They met with prestigious Park Ridge Attorney and columnist Russ Stewart to forward their complaints in front of Federal Judge Joan B. Gottschall at the Dirksen Federal Building. Please note from left to right, Terry Doherty (former laborer Chicago Department of Water Management) Thomas McDarrah (Bricklayer foreman) Charles Walker (former Building Department Inspector) Steve Collier (former DWM engineer) Attorney Russ Stewart John Sweitczak (Plumbing Inspector), Bruce Randazzo (DWM teamster) Victor Crown (legal research). These men suffered adversities during their employment at the City of Chicago, despite the laws to protect them. The men will fight for all Chicago City Workers. Many more current employees are subject to their day in court, please contact me so I can schedule your petitions and get you in front of a Federal Judge. This complex legal strategy was perfected and implemented thanks to the efforts of the Municipal Advocate General Directors Patrick McDonough, Michael McGann, John Sweitczak, and legal researcher Victor Crown. Meetings with attorneys Mr. Russ Stewart and Frank Avila Jr., Ivan Tomic, and Rachel Goodstein explored several legal angles. I was surprised at all the money the City of Chicago is spending on private law firms to defend these cases. I think Chicago City lawyers should defend the taxpayers. I wish all these people good luck and I am proud of all of them exercising their legal rights. Photo by Patrick McDonough.