Special Thanks To all Municipal Advocate General Directors Today!
Chicago Clout went back into the studio today to change direction. Chicago Clout is testing new faces for our show to reflect the more technical expertise we wish to impart to our audience. The president of a building board, Kristina Lee enjoyed a taping that will surprise many. Kristina waited for a long time to get to this point and she performed flawlessly on behalf of her building. I am looking forward to many more shows with new talent that should place less emphasize on politics and more on the legal aspects of Chicago City Workers rights. Also, Archie High and Charles Walker starred in several video plugs for Chicago Clout. Many people need to realize it takes time to prepare and edit these shows. I have invested over $ 15,000.00 in new high definition 1080 video equipment, two powerful computers, cameras, and programs. Our ability to create HD media is second to none in Chicago! Our equipment to produce, edit, and create shows, is state of the art. If you are running for office give us a call. I hope the test run in Can-TV today will produce a new Chicago Star. Patrick McDonough 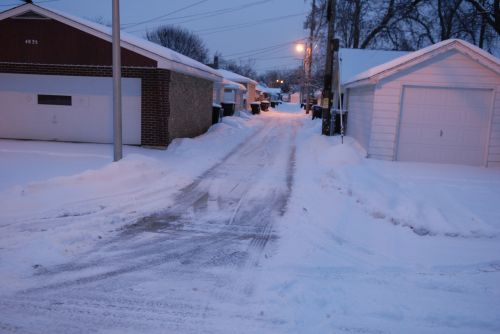 Thank you Chicago Taxpayers! Alderman Levar enjoyed a clean and clear alley this January 28, 2009. While almost none of the main streets or other alleys in the 45th Ward were cleared of snow this morning at 6:55 a.m., Alderman Levar had the alley clean from his garage to Sunnyside Avenue. I wonder who told the driver to make a special run for the Alderman. Maybe Levar called 311 and got lucky with special VIP treatment. All the neighbors to the south of levar’s garage got nothing. This is theft of services and Levar drives a big fat SUV to haul his carcass around. Why clean the alley if he drives a big SUV? Maybe to distribute taxpayer’s money to all his friends and family on the payroll, you think? Please tell Mayor Daley to quit whining about the millions spent on snow clean-up, the system works fine for the Levar family.

Alderman Pat Levar was in the local Chicago newspapers making a scene about the lousy way Mayor Daley was handling the snow removal in January this year. Chicago cut back on the services as Mayor Daley was trying to save money. This snowstorm was poorly handled and started a firestorm of protest against Mayor Daley. While all the suckers in the 45th Ward re-elected Levar again, they should have looked at Levar’s alley that was salted and plowed. The plowing started right at Levar’s garage to Sunnyside Avenue. I love when Alderman scam the system for their own benefit. The rest of the suckers in the alley put up with this time and time again! Vote for Levar again! Picture taken December 19, 2008

I answered my phone today and an unknown voice said hello, Representative John Fritchey! Mr. Fritchey was very nice and kind, I really enjoyed our conversation. John was always very supportive during my difficult times with the City of Chicago. I took some photographs of John at an award ceremony; they did not turn out very well. I always thought John should be a model, make a fortune, and not have a lot of headaches. I let John know I support his candidacy for U.S. Representative in the Illinois 5th district. I also let him know I will put some financial backing and will provide free photographic work. John Fritchey has a very good chance to win. As this campaign continues, I will keep you informed from a Chicago Clout prospective. Make sure you go to John Fritchey’s website, click here http://www.fritcheyforus.com/home/ Good luck Mr. Fritchey!

President Obama stated “To those who cling to power through corruption and deceit and the silencing of dissent, know that you are on the wrong side of history, but that we will extend a hand if you are willing to unclench your fist.” The second when those words were uttered, I thought of Mayor Daley and his band of goons. John Kass had an article about this first, I was too tired to write it down that night and beat him to the punch. Mayor Daley has spent a great part of his leadership in Chicago enjoying the benefit of a good economy. An idiot can rule with a full treasury. During the times of plenty, Mayor Daley spent like a fool on a mission, his only recourse when the economy soured, was to sell our assets. The Mayor speaks of doom and gloom now as if it was not his fault to store for a rainy day. There is every single politician taking credit in times of plenty and placing blame in the downswing. The truly greatest farce in Chicago was Mayor Daley allowing fraud and construction mismanagement, building inspectors sworn to protect the taxpayers allowed decrepit and substandard building. Homeowners went all out to purchase a home they could ill afford and could not maintain. Mayor Daley and the building department could have slowed construction down to a manageable level and make sure a controlled amount of construction and permits were issued. Supervision of Inspectors in the Building Department was lax a best. I remember when old man Daley was Mayor of Chicago during the tough times, he told the boys to “make it up on the streets”. I think Mayor Daley has no business giving President Obama any advice. Knowing how to corrupt an election and control power is one thing, look at the level of leadership by one of Mayor Daley’s henchman Scott Loeff. (pictured above) I hope President Obama leads this country out of the mess it is in, but listening to Mayor Daley and the other leaders that got us in this situation makes no sense at all. I hope Obama makes right all the wrongs done to the African-American community, gives a fair amount of good union jobs to blacks, all Americans should profit in honest leadership. I hope and pray Mayor Daley thinks outside the box and retires, his thoughts and actions inside the box has shuttered thousands of businesses and leaves the poor and homeless with nothing. Photo by Charles Walker, alleged victim of Scott Loeff. Patrick McDonough.

Just moments ago, before 5:00 p.m. today, Frank Avila Jr., an Attorney for many of Chicago employees, was assaulted by Scott Loeff. (January 15, 2009) Scott Loeff is a high ranking Commissioner in the troubled Chicago Building Department. Scott Loeff has turrets syndrome, snorts and makes grunting noises. Earlier in the day, I testified as to the condition of several issues regarding the Department of Water Management distribution practices with several interruptions by Scott Loeff. I brought this to the court’s attention under oath regarding the distracting nature of the well timed noises. The noises would start up when the opposing side would testify but not as much when Anna D’Anczio the Chicago City Attorney would speak. The City of Chicago was also fighting on the means in which I would, or not be paid. I felt a large amount of tension against Michael McGann his righteousness was coming through clear as a bell. I was not allowed to expand on some of the facts that would clear Mr. McGann, which is a shame. At the end of the day, Frank Avila was attacked by Mr. Loeff which resulted in Police Report #HR-1226-95. This happened in Chicago’s City Hall Lobby! Is this the way Chicago employees treats the Attorney for the Inspector General and FBI whistleblowers? Frank Avila saw firsthand the way many employees are treated in Chicago. According to Frank Avila, “I have never seen a case as clean-cut without any evidence such as Michael McGann’s.” Now that Mr. Avila Jr. knows the way Chicago employees treat an officer of the court, imagine the way the regular workers are treated. The Chicago Inspector General is investigating the incident. At least the Chicago goons did not threaten Mr. Avila’s life, at least not yet. Photo by Patrick McDonough. From left Michael McGann, Frank Avila Jr. Charles Walker

Chicago Clout wraps up another great year!
I wish to thank everyone for another great year. 2008 has been another success for both my daughters that attend Saint Mary’s University in Minnesota. One of my daughters write for the school paper and this year will be more involved with the school blog and website! Where did she get that talent from? Please enjoy a picture of the kids in the Hamptons; they also donated time helping the needy in New York City. (St. Gabriel’s Catholic Church) My sons are doing well in school and music lessons are coming along fine. One plays electric and acoustical guitar, one plays Double Bass and electric bass, and one plays percussion and drums. Everything is going along fine for all the kids.
Last year was a year of transition for the Chicago Department of Water Management, things are getting better and the job safety record is much better. Some areas are in need of improvement, but they are addressed. The Chicago Inspector General is more “employee friendly” and I feel they are listening to the average worker. Last year a famous Chicago Plumbing Inspector came on board and will host his first show this month. His organizational skill is beyond reproach, his integrity impeccable. I thank you Michael McGann. I also wish to thank all my friends that stood by me this year and wish to fight on to make Chicago a better place to work. I also thank my lawyers, Russ Stewart, Frank Avila Jr. Kurt Feuer and special thanks to Jon Loevy for holding his breath at times. Russ Stewart and Frank Avila won separate case to my family’s benefit; proceeds from one settlement will help the Municipal Advocate General. I want to give a very heartfelt thanks to Ivan Tomic, Patrice McDonough’s attorney for a reasonable fee and professional effort. I also want to mention a new attorney I intend to work with soon, Malcolm Chester, a fine attorney with expertise in Defamation; False light. He is representing James Sachay vs. Frank Coconate. I have several files we will discuss again very soon. I wish to thank all my friends as they wait for MAG to get organized, we look forward to our possible new office in Park Ridge, Illinois. Thanks to all the fellow Chicago City workers, also if you lose a job this year, we will be there for YOU. God Bless, Patrick McDonough.