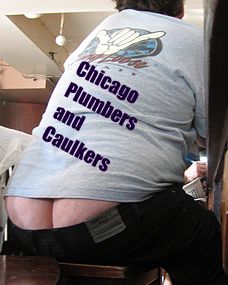 Pucker up and get ready to kiss the Plumber’s crack. According to a memo issued by the City of Chicago Department of Water Management personnel, Tom McManus will be present to discuss questions about the contract and other concerns at the Chicago Local 130 Plumbers Hall. The Plumbers Hall is located at 1340 West Washington Chicago Illinois. The meeting is September 10, 2009. Everyone is invited. In typical Local 130 manner, the invitation was not on City or Union letterhead. When you attend tomorrow, make sure you ask what the hell this union has done for your working rights. Ask why the dues are so high. Ask about his family favors while Local 130 members starve. Ask why he still needs a job when mandatory retirement means he should be out of a job and some other slob get the B.A. position. Ask what he does all day and how much money, in total he makes all year. Ask who Local 130 picks up all the legal fees for, while you and your family eat dirt. Then turn around and show these people your version of this picture. And ask for a reduction in union dues, wait for your answer. Ask why Local 130 did not let you vote on the changes in the contract with the City of Chicago. Photo touched up by Patrick McDonough.