I am proud to name war hero and Chicago Department of Water Management employee Carmen Hernandez, “Employee of the Year”. Memorial Day is an important day for all of us that care about America. Photo by Patrick McDonough, Chicago’s all time greatest employee. 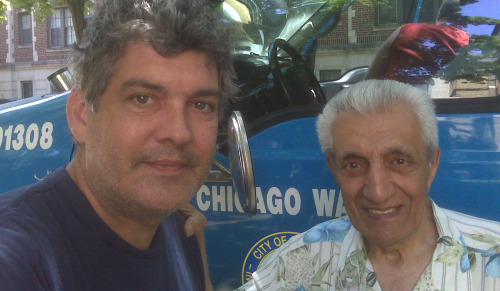 This is a new friend of mine in the 44Th Ward. The former alderman was Bernie Hansen. Bernie would count on Zodak Yonan to help with the ward’s needs. Today, Zodak told me he was frustrated with Reliable Contracting working on the new water mains on his street. Zodak was mad because two workers from that company did not live in Chicago. Zodak said, “Workers from outside the city do not care the same”. Zodak approached me because a private contractor allegedly left many people over the Memorial Day weekend without water. Mr. Yonan lived in this community over 58 years and helped keep Agassiz school open when it was doomed to close due to needed construction upgrades. Mr. Yonan had the street named after him for all the hard work he did to improve his neighborhood. One of his accomplishments was small iron fences to keep the grass in nice condition up and down the block. I will not go into detail but he is most assuredly a greater fan of the first Mayor Richard Daley. You can change Chicago for the better when you try, but the current Mayor of Chicago is not making it any easier. It is amazing what people tell you during lunch break. Photo by Patrick McDonough, Chicago Clout.

Many Chicago Politicians cater to the Hispanic community in Chicago. It involves contracts, voting, and jobs. Many points of view, from rabid hate to blank acceptance, make the Arizona laws on immigration a point worth investigating. It can be said that Chicago caters to illegal aliens and in return expect the “right vote”. If true, this could be a massive scam that threatens to undermine the laws and rules of fair play in America. Chicago Clout is hosting a few candidates that will provide insight for all of us in the middle. We want to find out what is really in the best interest of America. These videos will allow us to make an informed decision. Vote Chicago, Vote. Patrick McDonough

Daley shakes up Transportation, Water Management departments
May 14, 2010
BY FRAN SPIELMAN City Hall Reporter
Mayor Daley on Friday once again shook up two city departments at the center of the Hired Truck and city hiring scandals.
When the music stopped in Daley's version of musical chairs, Acting Transportation Commissioner Tom Powers was the new commissioner of Water Management. Bobby Ware, Transportation's managing deputy, was the new Transportation commissioner.
And Water Management Commissioner John Spatz was the odd man out. He's expected to be demoted to first deputy.
Powers, Ware and Spatz did not return phone calls.
Ware, 47, is the son of Mitchell Ware, a former deputy police superintendent and former Circuit Court judge who co-founded Chicago's premier minority law firm.
Mitchell Ware's 1998 judicial appointment by then-state Supreme Court Justice Charles Freeman raised eyebrows because the IRS had $318,000 in liens against Ware for unpaid taxes dating back to 1981.
Daley has been under fire for a shortage of African-Americans in top management, particularly after the resignation of Office of Compliance Chief Anthony Boswell, the abrupt retirement of Fire Commissioner John Brooks and the firing of Deputy Water Management Commissioner Tom Talley.
The appointment of Bobby Ware, who is also a lawyer, should appease African-American aldermen. But, the leadership change is somewhat ill-timed. Transportation just kicked off its construction season with Phase Two of the Wacker Drive Drive reconstruction project.
Powers, 42, has been with the department since 1996, spending four years as first deputy and one as acting commissioner. He was never promoted to the permanent job because of the conflict posed by the fact that his brothers work for engineering companies that do business with CDOT. Apparently, no such conflict exists in the Department of Water Management.
Spatz has a background in chemical engineering and used it to focus heavily on water quality. But, Daley views him as a weak manager, sources said.
Spatz was forced to fire Talley after Inspector General Joe Ferguson accused the $127,824-a-year deputy of dispatching city crews to do drain work on private property.
And Spatz has managed to entice just 5,000 homeowners along Chicago's Bungalow Belt to make the switch to water meters instead of paying a flat fee for unlimited use.
Only 1,000 meters have been installed so far, in spite of Daley's seven-year guarantee that water bills during that period will be no higher than they would otherwise have been when the water spigot was flowing freely.
Three years into a $39 million contract, automatic meter readers have now been installed on 140,000 of 162,000 existing meters that measure water usage in tall buildings, businesses and newer homes.
Only after automatic meter readers are up and running can Chicago can begin to cut off the free water spigot by installing meters in the 350,000 households without them.
For months, there has been speculation that Daley may be laying the groundwork to privatize all or parts of Chicago's water system. Some insiders believe Powers may have marching orders to move more aggressively toward that end.
But, top mayoral aides insist that selling off the filtration plants is not in the works and has nothing to do with the changes.
Dave Donovan — brother of Richard J. Daley's longtime patronage chief Tom Donovan — is expected to serve as Ware's operations chief. Dave Donovan currently serves as a deputy commissioner in charge of trades for the Department of General Services.

Men for a better Lawndale have been a driving force in Chicago’s 24Th Ward for many years. Their membership boasts of over 70 citizens bent on making their community stronger and move vibrant. The bridge project is all about youth and community development. It is about sending a clear message to Chicago Public Schools, a positive and hopeful message. ABC 7 News covered some of the projects they are most proud of, including providing numerous computers to members of the community. They also provided jobs to over 70 youth in the Bridge Project. I enjoyed part of the informal meeting tonight as a special guest. Julius Anderson name was brought up again as the next Alderman of the 24Th Ward; some mentioned his name because he provided leadership for decades to the community. The current Alderman Dixon has been a complete bust and I do not know of a single job she has brought home to her community. Citizens of the 24TH Ward want good paying City Jobs. Dixon has voted with Daley every time but has nothing to show for it. Members of this group agreed to double their efforts to picture the private contractor’s workers, making sure the diversity in the 24Th Ward reflects the hires of private contractors. I agree, taxpayers have subsidized Daley’s choices for contractors, but I do not see enough black men and women employed by these contractors. If Alderman Dixon is a Daley lackey, she needs to step down so the folks in the 24Th Ward get better opportunities. I asked Julius Anderson to be a guest on the next Chicago Clout Show. Photo by Patrick McDonough. Pictured from left Pastor Lloyd Coaker, Julius Anderson,Glenn Ragans, Mahiri Anderson, Faruq Al-Amin, LaVandis Robinson.

Alphonso “Al” Treadwell is the new teamster with the City of Chicago’s most professional Investigators in Chicago. The Department of Water Management knows this elite group can handle any emergency thrown at them. In fact today, a leak causing switches to blow at the C.T.A.’s deep tunnels today was no match for Ronald Bober and Patrick McDonough of this exclusive investigative team. If you are part of this team you undoubtedly become familiar with the who’s who in Chicago politics. Today, Al enjoyed a good conversation with Cook County Assessor candidate Joe Berrios at lunch time. We ate at Lazo’s, a nice Hispanic restaurant in Chicago. Not bad for Al’s first day. Photo by Patrick McDonough