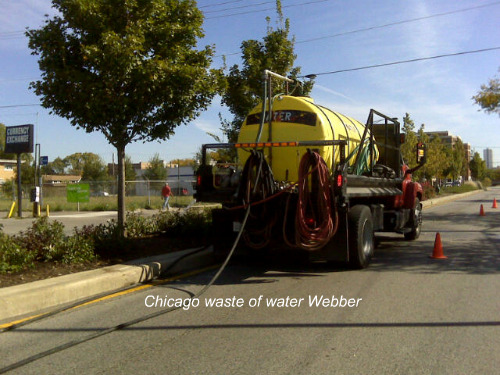 Today was another mess for Chicago taxpayers thanks to scams by Mayor Daley friends and family contracts. Anyone driving down Peterson Avenue near Keating would have witnesses an accident that might have been caused by a water leak from the Landscaping maintained by Christy Webber Landscapes and Central Sprinkler Company. I have made Chicago Clout insiders aware of another one of Mayor Daley’s preferred contactors making unneeded expenses for broke Chicago taxpayers. This massive tanker of water uses two workers to drive around and water plants despite it being late in the season. The two workers were watering the plants on October 8, 2010. Not a bad thing you say? Before you start you hating, The City of Chicago paid to have a sprinkler system installed. The Sprinkler system is maintained by Central Sprinkler from Elk Grove. Some of these sprinklers are flooding Peterson causing dangerous conditions. Why in the hell would Daley hire a company to take Chicago City Water from a Fire Hydrant, load the water into a tanker, and then hire two workers to water plants? Why does this scam really stink to high heaven? Why does the sprinkler system not work? Who approved this contact extra? Are idiots running Chicago? Why are the Chicago drivers in danger as they cruise through Peterson Avenue? Today, Chicago City workers were not paid, but Daley’s private contractors continued to do nothing? The Chicago Unions controlled by Daley really did a number on everyone, again. Photo by Patrick McDonough