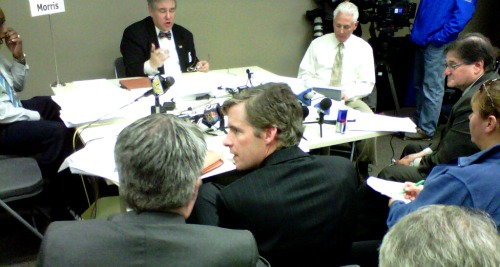 It was no fun defending Rahm Emanuel today at the Chicago Board of Elections. Rahm Emanuel lawyers seems, hurt, scared, and lost for words. Mr. Morris, the Board of Elections choice to oversee this case was having a very long day. I was happy to see Mr. Odelson and Mr. Russ Stewart asked to be in a special group of trusted and experienced lawyers to oversee the event. I was surprised the Chicago Media painting a seen that was not reflective of the atmosphere. I also spoke with Mr. Morris and voiced my concerns that the entire room was filled with many hearings and cases. I think that will be remedied. All in all, the people in attendance were very nice and respectful, despite the lack of proper audio levels. One of the objectors put in his two cents regarding the lack of credibility at the Board of Elections. Many other objections were made and I think Rahm Emanuel did himself a major disservice by not showing up. Rahm looked like a coward. If you are going to run for Mayor and people make an objection, have the guts to defend yourself. I think Rahm needs to get his entire defense in order to avoid the perception of ciaos. Rahm really lost the chance to show he can lead out in front, instead of being a “wizard” behind the curtains. Rahm has lost all the momentum the press gave him and the word is out. You can see an ice-cold and in control Burt Odelson. Photo by Patrick McDonough