Many City of Chicago employees were victims of the Mayor Daley patronage machine. A landmark settlement for millions of dollars was distributed to many city workers. Many city employees were afraid of retaliation and did not file for relief from the Federal Monitor. After intense negation with the Internal Revenue Service, we can get you thousands of dollars back in overpaid taxes. Chicago taxed the money as if it was income and it should have been a tax-free settlement. If you or someone you know received a Shakman Settlement, contact Chicago Clout so you can get your big refund and interest. Mayor Daley left a big pile for Rahm Emanuel to clean up, it never ends. Just ask Bruce Randazzo what it is like having a few extra thousand in your pocket. Photo by Patrick McDonough

Let’s watch what happens as Rahm Emanuel spins the auto falling into a massive hole at Elston Avenue and Foster. Saturday morning I arrived to work and found a Chicago Police officer loading his SUV with Barricades for the North District Department of Water Management facility near Montrose and Cicero. I was surprised the private security guard allowed this policeman to take barricades without permission. The Leak Desk was trying to everything they could to keep the car falling into a hole from me, a typical un-educated response form that employee. I suppose the Leak Desk wanted to keep it a secret a car fell into a massive ditch. A newly made foreman with political connections fresh off from a night of overtime quietly snuck into the yard to again swipe in to get a nice 16 extra hours of overtime. Members of his family also showed up to work on the same crew to gobble up the overtime. This foreman was promoted while he was on a workman’s compensation claim, a real fraud if there ever was one. So far the Shakman folks are still doing nothing about this; just continue billing with no results.
A car fell into the ditch and my informant said the driver car had no insurance, a possible fact the newspaper and TV crews forgot to mention. The night investigator crews were kept on overtime despite a new crew was on the payroll for straight time. This crew was not relieved.
The management from the Jardine Plant did a pretty good job handling this situation and kept the overtime under control. I think the city workers for the most part did a very nice job. Some employees from other districts also showed up to assist because many of the guys in the North District are not able to handle these emergencies, politics has a way of doubling the cost. I think the Sewer guys did an outstanding job and should get credit. Daley’s phony contractors took over the project after all the real work was done and were pictured in the ditch breaking every safety rule known to man. If you think City Workers are screwing the taxpayers, look at the picture in the Chicago Tribune. The amount of non-union, non-resident labor on that project was amazing. Make sure you get an accounting of Rabine and the rest of the private contractors screwing the pooch on the tail end of this project. This bill will blow you away. Rahm Emanuel used the project to sell the gambling and casino and light a fire under Quinn’s azz. Rahm, this happened because an investigator crew went out on a low pressure call and did not check the mains and the services. The investigation was another drive by; costing taxpayers tons of money, almost cost a life. Some crews make as many stops as they can to look good, some do not. Rahm needs to look into the history of this intersection and forget the gambling in Chicago. Photo by Patrick McDonough. 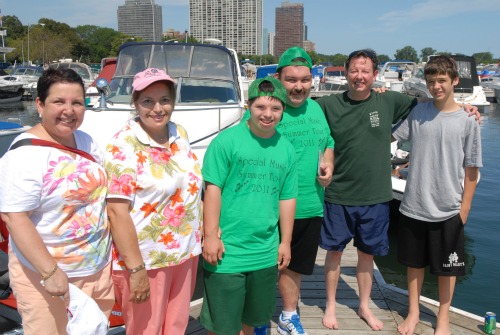 Today was a very important day for Emery Joe Yost of the Chicago Park District and Patrick McDonough of Chicago Clout and an employee of the Department of Water Management. It took about a couple of months to get everything prepared for an awesome music video to promote awareness about special needs. I want to make a special shout out to Adam Koleno, General Manager of Master Craft Boats of Chicago, Michael’s Ultimate Detailing & Design, and Jim and Jen Milligan of Fox lake Propeller. The level of work in preparation was beyond our imagination. I wanted the boat to shine perfect and hum like Rolls for this shoot and it did. The Folks at Exclusive Automotive sound work was dynamite, the boat rocked loud. Special Thanks to all the moms that brought the guys to the Diversey Harbor Yacht Club and all the folks that were so supportive. I cannot wait to get this video out but we want to make it right. We are also going to add video taken at other shows this year. Thank you to all helpers at the video shoots today including my sons and friends. Thanks to all the folks at the Chicago park District for making a super day to remember. We are working on making a much larger boat available in the future so we can make this a regular event in Chicago. Feel free to join us. Learn Video, Learn photography, Learn music, and Learn compassion. Photo by Patrick McDonough.

This is one of many photos I took at the City of Chicago Air and Water Show practice 2011. I used to go to the Jardine Plant as a City of Chicago employee but I think the practice has ended. Now, I hop on my boat, exit Diversey Harbor and get right underneath the aircraft. It is an amazing sight to get so close; the planes skim right over the water. There are many Police and Coast Guard Boats patrolling the area. I have some more photos I am thinking of sharing. Maybe Rahm Emanuel can ride the planes and then declare “Mission Accomplished” with the City Budget soon. Just an idea. Photo by Patrick McDonough

Today was another great day for Chicago Clout. For many years Chicago Clout has awarded thousands of dollars for college bound students. Today Stephanie enjoyed a boat ride and got her brand new Sony laptop computer. The funds are awards by the Patrick McDonough Trust and Chicago Clout revenue. Stephanie will also receive additional income to smooth out the bumps for the next four years. You can recommend the son or daughter of any current City of Chicago employee or any young person in need. Next week we are having a “Special Music for Special People” fundraiser. Photo by Patrick McDonough

2249 South Blue Island in Chicago is another example of Rahm Emanuel’s privatization. It is also another example of poor leadership and waste of taxpayer money. This Fire Hydrant should have been moved a long time ago. Many of the phony minority companies, Daley contractor pals do not know when to coordinate and schedule work. Now Chicago Department of Water Management will need to move this Fire Hydrant destroying brand new work causing embarrassment. A Fire Hydrant in the middle of the street, now that is really stupid. It is time for Commissioner Powers to start firing deadbeats at the Jardine Plant. Call the newspapers, this is a story. This job will always look like crap from now on. Back charges are in order. Patrick McDonough. Thanks for the pic my Southside boyz.