The Chicago Inspector General and T.V. star Joe Ferguson eyes must have bugged out after hearing the news that a clout family is involved in a prostitution sting. Joe was appointed by Rich Daley a political thug that has the city of Chicago on the verge of bankruptcy. At last count, Judge Michael J. Hood, appointed by State of Illinois Attorney General Lisa Madigan, will need to look the other way when the Tierney family walks into court May 29, 2015. An appearance was files May 24, 2015. I think Judge Michael J. Hood should make sure he has no conflict with the tax free Judge makers in Illinois. Chicago’s Inspector General Joe Ferguson has done nothing to protect the ladies at the water department yet. Joe likes chasing low hanging fruit and losing in court when challenged. We need to remove Joe Ferguson and get a real Inspector general that will run an OIG that we can be proud of. Less T.V. and more crime fighting. Also Joe Ferguson latest T.V. appearance on “Chicago Tonight” was a blatant political stunt to reelect Rahm Emanual. Please see attached documents.Brian P Tierney Certified Statement of Conviction Disposition.pdf

Chicago Clout has continued to report corruption because taxpayers are tired of the lawsuits and people deserve fair and equal employment. On February 5, 2015, Brian Tierney went to 3205 Old Glenview in Wilmette for “solicitation of a sexual act”. Brian P. Tierney knowingly agreed with a Wilmette Officer to pay $250.00 for one and one half hours of oral sex and sex. Brian also “wanted a girlfriend experience”. Brian than handed the police officer $250.00 united States Currency to the undercover officer for the sexual acts. Tierney, an employee of the City of Chicago Department of Water Management, works under Paul Hansen, son of former Alderman Hansen of the 44th ward. The City of Chicago Department of Water Management, North District has been part of Hired Truck, hiring corruption, bribes for overtime, and a heroin ring. The City of Chicago Department of Water Management official response is “It is a Police matter, let the Police handle it”. Translation, we ain’t doing crap about this clout guy. The Chicago Inspector General has always done nothing because they are cowards and frauds. If you are interested in watching the case get dismissed, please join me at the
Second Municipal District Courthouse 5600 Old Orchard Road Room 136 Skokie, IL 60077 May 29, 2015 at 1:30 P.M. Room 103. Tierney is still at work with no supervision, scary. Remember, everyone is innocent until proven guilty. Most the North District guys I heard use good ole Chicago hoes at North Ave and Cicero Ave for far less money. Save your money guys.

Please go to this website to see more on this explosive charge here http://stoneformayor.com/civil-rights/the-signature-requirement-for-chicagos-last-election-was-most-likely-unconstitutional-in-29-of-chicagos-50-ward/ Go to this website. 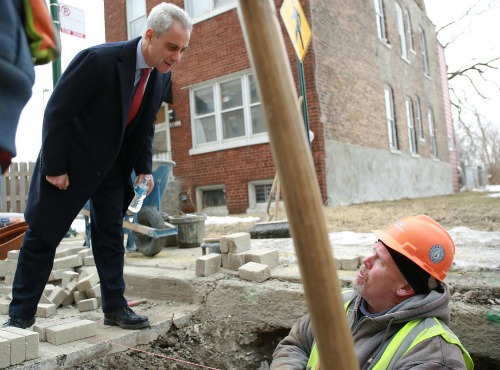 Here we go again with Rahm Emanuel visiting Chicago Department of Water Management employees attempting to stay out of politics. It is hard to complete a day’s work for a day’s pay when Rahm Emanuel wants to again pretend he is the go to guy for City Workers. Just four years ago, Rahm used many City Workers and Union Goons to get him elected. Those guys quickly got promotions and City Jobs. Some also became foreman in record time. A lousy Inspector General in Chicago just walks away from these investigation so he could get another four years paycheck for himself. Most folks that follow politics, know Rahm was not seen with peon city workers for four years. His “lifetime” job allowed him to travel the world on taxpayer’s dime and go to fancy hotels living like a player. Rahm, this election, has fallen back in love with black folks now that his lifestyle is in jeopardy. At the debates, Rahm had some scary cold sores on his lips showing he is in a real panic. He had some goofy freak at his Election Day rally in the background that could not stop crying. I hope more people come out and vote. I also hope Chuy and Rahm debate this time. I am suggesting all City Workers take a massive pay cut to help the city out of debt. We also need to undo every promotion Rahm has made in the last four years. I suggest Rahm gives every city workers a 25% pay reduction until the books are balanced. Rahm also needs to stop using Chicago Police as his personal gestapo. I also hope Rahm and the Jeffrey Epstein mess does not take a toll on Rahm. More on this later.