Rahm Emanuel is hiding in Cuba and the Chicago media is keeping it quiet. Many Chicago Alderman have circled around Patrick “Daley” Thompson to replace embattled Rahm Emanuel. The noose is slipping around Rahm’s neck and he needs to return soon. The folks in the 44th ward are cutting deals and Rahm is none the wiser. Rahm’s is not able to raise the money he once could and is counting on short term memories from taxpayers. Rahm is also putting his media queen Joe Ferguson on boards despite his major failures. As long as they have the Sun-Times, Rahm might have a chance. The biggest problem is a major group of protests that make Rahm look like a hurt dog. Chicago is the worst shape ever. Is Pat Thompson the answer? Does he have the balls to raise the taxes again in a few short months? So far 15 Alderman are backing him up. WOW. Will “Balloon head” have the moxie to overthrow Rahm? Let’s see.

Please do not tell anyone. Please enjoy your new tax bill. 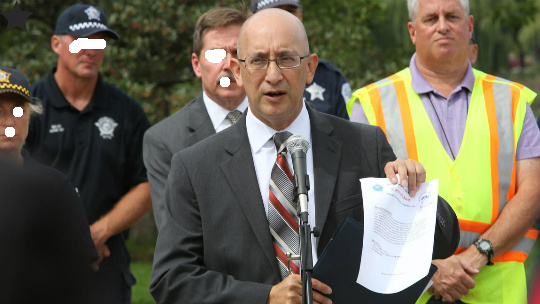 Many Chicago Citizens are relieved McCarthy is fired from the City of Chicago as top cop. McCarthy was not liked by the rank and file, but he covered up more wrongdoing than any other Police Superintendent I ever knew. He always had a big posse of goons with him when he went to the Chicago Personnel Board and entered in the private rear doors. Even Joe Ferguson, the inept Inspector General had to wait in the entrance area where all the other peons waited. McCarthy has clout so he will end up with a contract to keep his yap shut. His new young wife is from a clout family, so he will be fine.
In the picture is the interim Chicago Police Superintendent John Escalante. He will not get the Superintendent position because he has little clout. In the Picture with John is City of Chicago ex-cop William “Butch” Bresnahan. Bill has been floating around department to department as the police presence Daley and Rahm wanted after Hired Trucks. In this picture Bill was running to the cameras again despite the fact he docks workers for exercising their first amendment rights. Bill was working the sewer pumps to empty a marsh for the police in this picture. Bill is currently the top sewer guy at the Department of Water Management. According to unnamed sources, Bill wanted a top position at the Police Department but was passed over. Some folks are never happy, Sewer pays real good. Good luck to John Escalante, you will need it.