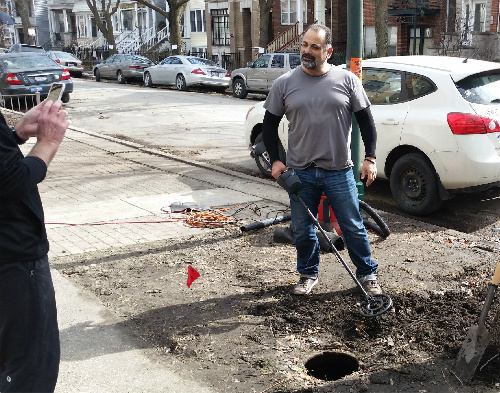 Many City of Chicago residents love their trees in front of their home. Not long ago, a leak was in the parkway of their home and a Investigator crew came out in the middle of the night to check the cause. When the homeowner came out side, they felt like the crew was rude and abrupt to them. Them were given a paper with a notice the tree would be removed. The homeowners were very upset and contacted Larry Yellen of Fox News. Not long after, (Sunday February 28, 2016) Patrick McDonough, A State of Illinois Plumbing Inspector, was requested to investigate the situation. McDonough said the Shut off valve in the parkway was not even exposed so how could the city make a determination. The home owner and the neighbor pumped down the water and retrieved a metal detector.
George hunted down the B-Box, exposed it, and found the top was never removed. McDonough suggested the City should send some laborers from the Central District that know what side of the shovel to use. Since the work was in sand, it could be easily accomplished with-out destroying the tree. The lead pipe from the street could be re-routed from behind the tree and reconnected. There were no iron risers inside the meter vault. But, the North District is run by politicians.
On Monday, February 29, 2016, Paul (Bunyan) Hansen told the homeowner he wanted the tree chopped down. Paul Hansen from the 7200 block of West Olive should have known how important trees are to the quality of life in Chicago. Paul Hansen, is the son of 44th ward Alderman Bernie Hansen, so he got the “head” spot in the North District Water Department despite not having any training in the Plumbing Industry. Paul is best known for having a DUI and then a promotion. Alderman Tunney told me he pushed for Paul’s promotion.
There are options when you have skills and common sense. But that is not always the case when it comes to Department of Water Management employees.