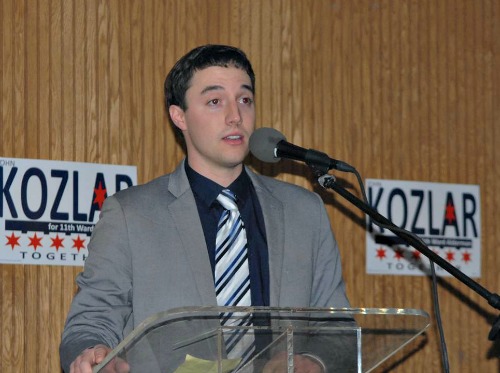 On, November 29, 2014 Chicago Aldermanic Candidate John Kozlar and I met for the first time. John is running for the 11th Ward’s top spot. The 11th Ward is the home of one of the largest political machines ever. In fact, the ward has produced more hacks on the city payroll costing taxpayers millions. I was invited by a large group of Chicago City Workers that are going to prove what they can do to improve the ward. Very unselfish. John would be a breath of fresh air for the 11th Ward and would free the businesses from the constant shakedowns. When I met the folks supporting John Kozlar, I was surprised at the diversity. The 11th ward is a strong clan. I did not expect to see bikers at the fundraiser. When these guys want something, they get it. If I lived in the 11th Ward, I would vote for John Kozlar, educated, humble, caring and concerned. Good Luck Mr. Kozlar, here is the link to his website: http://www.johnkozlar.com/ Photo by Patrick McDonough