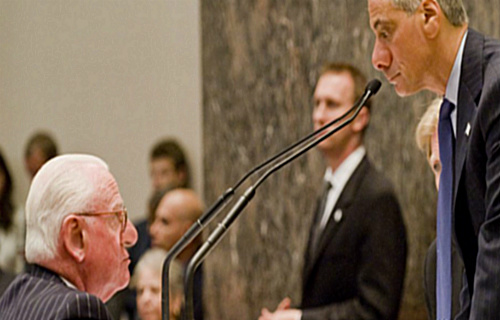 The City of Chicago Department of Water Management sent more employees down to an interview by the Department of Human Resources special EEO Investigator Unit. The City of Chicago Human Resources EEO unit is really used to receive information in case of a pending lawsuit against the city. Chicago is in the middle of several major lawsuits due to the mistreatment of blacks and other minorities.

Much of the testimony given to the EEO unit is given to the Office of the Inspector General. The Chicago Law Department is than given the information to defend itself in court. Rahm Emanuel is furious because he listens to Alderman Tunney and promoted Paul Hansen to Superintendent of the North District Water Department. Paul Hansen sent hundreds of emails to coworkers depicting blacks as fools and idiots. Paul Hansen would also discipline blacks prior to promotions and chances of advancement.

Paul Hansen also sat in interviews with William “Meathead” Bresnahan and determined the promotions.
Some of the folks interviewed today conspired to testify that they “saw nothing” and to let an employee subject to racial discrimination and retaliation look like a liar. This is part of the North District “no snitch policy” that is still in place. One witness was told, “If he fucking says anything, the ditch will fall in on him”. MANO ALIVE.

Well I do not know of a single accomplishment the EEO has made since this unit was started. We will soon let you know more. Most City of Chicago employees that end up in front of these goons get no protection at all. Or as one Union Representative said, “Just shut the fuck up”. “say you didn’t hear nuttin”.

We’ve got racists in the Water Department. What a shock.

This is Chicago, which is part of America. We’ve got racists preaching from pulpits, writing laws and driving buses, too.

The real shock is that such ugly in-your-face, old-school racism, as well as homophobia and sexism, were allowed to fester and grow within the city’s Water Department, an apparent dumping ground for political hacks. People in charge looked away. They said nothing.

The other real shock is that some people still think this is where bigotry begins and ends in America, with the louts who sound like Klan members, when, in fact, the most insidious forms of discrimination today are institutional.

By all means, let’s drive the bigots out of the Water Department, and their spineless managers, too. But let’s take an even firmer stand on a second local scandal in the news this week — the way property values are assessed in Cook County to favor the rich and stick it to the poor. Let’s put an end to that as well.

In a report released this week by City Inspector General Joe Ferguson, we learned more about how one particular goof at the Water Department, district Superintendent Paul Hansen, the clouted son of a former alderman — no surprise there — banged out racist emails the way nice people send out birthday wishes. In one email about Chicago’s high murder rate, Hansen joked about a fake “Chicago Safari” package that would guarantee tourists “at least one kill and five crime scenes” and views of “lots of animals in their natural habitat.”

Hansen and a couple of other Water Department employees were fired or forced to resign, and Mayor Rahm Emanuel also collected the resignation of the department’s top boss, Barrett Murphy. But given the department’s obvious culture of tolerance for bigotry, we can’t imagine the housecleaning is over. Changing a culture take changes in leadership throughout the ranks.
Meanwhile on Tuesday, while testifying before the Cook County Board, county Assessor Joseph Berrios said nothing to convince us that his office doesn’t have a serious problem of institutional racism. After the meeting, Cook County Board President Toni Preckwinkle said she’s going to hire an outsider to “review” how Berrios’ office does real estate assessments, but nobody needs another study. That’s a way to look concerned while doing nothing.

Repeatedly over years, civic watchdogs and investigative reporters have exposed how the county’s way of assessing real estate values, which determines how much everybody pays in property taxes, is mysterious, arbitrary and stacked in favor of people and businesses that can afford high-priced tax lawyers.

If further proof were needed, the Chicago Tribune published a deeply detailed series of reports last month that showed how the assessor’s office uses a mishmash of formulas to overvalue low-priced homes while undervaluing high-priced ones. The pattern hits minority communities particularly hard.

“We are systematically over assessing homes in poor communities — the people that can afford it less — and it’s time to fix it,” Robert Weissbourd, president of an economic development consulting firm, complained to the County Board.

The pathetic truth is that Berrios’ office for seven years has had on hand a better model to assess property values but has never fully used it, if at all. Weissbourd’s firm helped devise the state-of-the art model, with funding from the MacArthur Foundation. It would significantly reduce the degree to which assessments shift the tax burden to those who can least afford it.

Forget about the study, President Preckwinkle. Tell your pal Joe Berrios to forsake the dark arts and start using the new model.

When you get down to it, baked-in institutional racism is more repulsive than some throwback bigot in the Water Department.

ABC 7 News reported a fire in the 1700 Block of North Drake last night. For years the Department of Water Management has not repaired the broken Fire Hydrants. A simple fix, which would take about three hours, would save lives. It is not being done. Rahm Emanuel should have a hearing and terminate all the employees responsible. Going to a fire with no water make no sense at all. It is like going into a Chicago Alderman’s office with-out a bribe, it just makes no sense at all. Thank you ABC 7 News and all the stories by Dave Savini at CBS @ News. http://abclocal.go.com/wls/story?section=news/local&id=8512362 When is the Federal Bureau of Investigation going to look into this? The City of Chicago is also very short on Plumbing Inspectors, but they must now fix that problem. Story by Inspector Patrick McDonough.

Last week Anthony Fico celebrated 50 years of service to the City of Chicago Department of Water Management. He retired. I was hoping Rahm Emanuel or the Commissioner would have celebrated the milestone. I was hoping to hear of a party, a nice goodbye. Tony also worked side by side with my father for many years, they became true friends. Fifty years of busting his ass on the Hydrant truck as his twilight neared. Tony got the short end of the stick when it came to promotions; he is a walking Shakman violation. I have never in my life seen any man work as hard as this guy. Tony Fico, on behalf of the working guys at the City of Chicago, thank you for all you have done. Tony is the best ever, period. Thank you. Photo by Patrick McDonough

The City of Chicago has a crime ridden Streets and Sanitation Department so bad, Mayor Daley shuffles the high ranking members like a deck of cards. One of the employees today crossed a ward boundary in the afternoon to give me some grief. Streets and Sanitation wards are run by Ward Superintendents usually under the control of the local Alderman. I think this dude is with Alderman Allen and the 38TH Ward goons. Today, he crossed Addison Avenue at about 1:00 PM and started venting about safety issues, safety vests, I think he is very upset with his job and he is upset with the world. As a whistleblower against Alderman Allen and the City of Chicago in general, I get lots of tough guys that want to lull me into a fight and torment me on the job. In the past, guys that made my life miserable were rewarded with overtime, favors, and respect when they verbally assaulted me. Many other acts of random violence occurred on a regular basis. The Street Sweeper is a job that is considered a plum assignment to get you out of the garbage truck. The garbage truck is always hot for the driver, the engine is right under you; it stinks bad, and is a dangerous job. The rumor around the Teamsters was, ring a few doorbells, kiss a little rump, and walla, you are on the Street Sweeper. I tried to find the name of this dude, but Alderman Allen’s staff was not sure, Gregory Von Moser, and his replacement was scared as a cat to talk. This Street and Sanitation Street Sweeper needs to wear a helmet on duty, wear safety glasses, wear his safety vest, wear gloves, wear his seatbelt, and keep the clear plastic deflector for branches up at all times. He might also need to keep in his own ward and stop harassing whistleblowers. If you know what this goon was doing in the 30TH ward today, give me an e-mail, Mayor Daley wants you concentrating. Photo by Patrick McDonough.