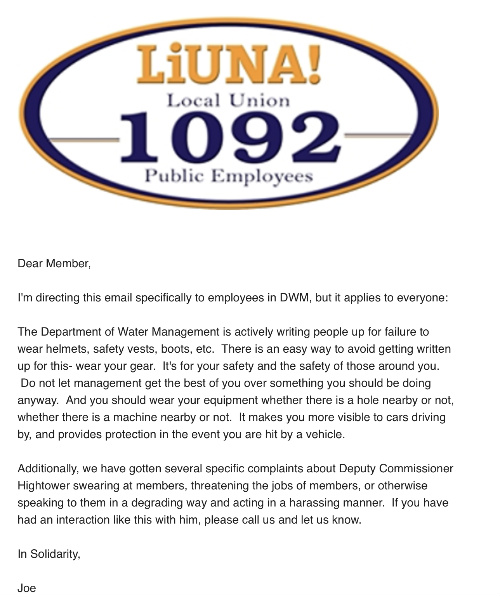 Today I called The Chicago Department of Water Management offices to find out about the memo that many City of Chicago Department of Water Management Laborers are upset about. My call was forwarded to Gary Litherland, the DOWM spokesman. Gary knew nothing about this and did not get back to Chicago Clout for a comment. Many City employees are getting time off for not wearing proper gear. Many city workers get hurt thanks to a foolish lack of common sense safety rules. Chicago is broke and Alderman Burke has stopped paying injured City Workers because he is an idiot. Rahm left him to shake down venders for political contributions.

Many City DOWM employees feel D.C. Hightower is acting mighty uppity since Paul Hansen got removed for racist emails. One employee said, “Give a N@$$#$” some power and they act the fool”. I want all DOWM Management employees to know, wear your safety gear, and if they order you to work in a ditch with no shoring, call 911. You need shoring and all safety gear to live a decent life when you get old. Work safe, no exceptions. Chicago Clout is still waiting for the Konrad Tucharski Safety records. Do not allow Konrad to die in vain. Work safe. Work smart.

If you are verbally assaulted by any City of Chicago employee, call 911. Make a record of the actions. Do not tolerate any negative behavior against you. Take pictures. I never had a bad experience from Dwyane Hightower, he always acted in a professional manner toward me. I though he was very tolerant under the circumstances of blatant racism and outrageous behavior by Barrett Murphy and William “putz” Bresnahan. Most laborers are lucky to have a Union that cares about the working man, just imagine if you had a windbag like Mike Tierney from Plumbers Local 130 moping around. Count your blessings Local 1092, wear your gear and work as if your life depends on it, it might.