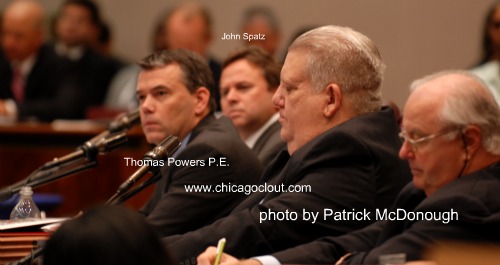 On Friday October 29, 2010. Thomas Powers P.E., the current Commissioner of the Department of Water Management was grilled by the Chicago Council. Several Aldermen went above the call of duty and were prepared with great questions. I admire Alderman Ed Smith for being prepared and well informed. I noticed John Spatz did an excellent job supporting the new Commissioner. Photo by Patrick McDonough

It was Sunday morning and I heard it again, “I like working for Jesse, you know you will get your time.” I got my assignments for the day and I was kept away from that job site. My radar starts pinging when a certain chain of events occur. That is the advantage of experience. I called the foreman Jesse Canet and let him know I would head out to that job and watch what was going on. He told me it would not be necessary and I was not wanted. Many times after work, I watch the progress of overtime jobs to gain insight into loafing and general waste. I was told that morning the job would not go over 8 hours. Sure enough it did. The foreman screamed out of the Sunnyside yard and took his car to the jobsite at around 3:00 p.m. Since he always worked out of the City Truck, this peaked my curiosity. I called the big boss and was told not to interfere with the job at 2242 North Spaulding. I explained I was concerned about the overtime and possible waste of taxpayers’ money. When I go to these jobs, I do so as a journalist and videographer. I enjoy my website and the knowledge it imparts. The first information I got was from the night investigator crew and it sounded funny like some overtime was made for Jesse’s crew. I also talked to a high ranking official that told me the crew waited much of the day for a Vactor. A Vator is a large sewer truck that is basically a jet rod and massive vacuum. When I went to the site, I saw in my opinion, a three or four hour job. But on Sunday, and double-time an opportunity like this could make for some powerful paychecks. I was also surprised because Jesse Canet was not on the overtime list. The overtime list has foreman and plumbers that have no interest in working overtime. That way the boss can put his friends and pets on these lucrative jobs. As soon as I arrived, the work began at a furious rate I have never seen before. I think it was because I was videotaping. Two of the workers were covering their faces. It was brought to my attention the crew was mad because a “rat” was watching. In the past a job like this would have gone for 16 hours. That would mean a paycheck of at least $1440.00 on top of a $4,000.00 bi-weekly take home check. At around 4:00 the work was going fast and furious, the crew was done at 4:30 p.m. I think I heard Jesse Canet say swipe out at 5:30 p.m. One hour travel time at double time. Earlier in the day the big boss told me Jesse is the only guy they can get to work the overtime. His caulker always seems to get the overtime with him. The call from the leak desk was water in the basement; I think we all got soaked again. Amazing how I found out the basement is a full basement and unoccupied, hardly an emergency. I was told this is a clout job. Clout is really expensive in Chicago. If the basement was occupied, someone needs to pay taxes. Welcome Commissioner Powers, the game stays the same. Photo by Patrick McDonough.

The Department of Water Management had a visitor back at the Jardine Plant this morning. He was blocking the front entrance with his big black BMW. Rumor has it he smells a job opening at the Department of Water Management left open by a fired commissioner. I guess Mayor Daley might be pulling the race card in filling these openings instead of hiring a college educated licensed engineer. Mayor Daley has a habit of filling a position with someone of the same race which makes no sense. In a related story, Fran Spielman reported Alderman Austin does not want an Inspector General snooping around the Chicago City Council members. I think she might change her mind when she is done unloading more family and friends on the city payroll. The Department of Water Management has a mess in the payroll department with many city workers shortchanged on the paycheck week after week. Workers complained some payroll department employees are not trained or capable of handling the job. A large amount of complaints were unearthed in the files cabinets of a terminated water department employee. This is another version of the old "circular file". Bosses said they will get back to me soon, some employees leave at 3:00 p.m. and making less clouted workers stay until 3:30p.m. Thanks to the bosses in Central District for looking into this matter.

Working for the City of Chicago requires some heavy lifting while onlookers watch you work. In fact today was no different, the City of Chicago and various agencies could have pitched in to help the taxpayers win a fight against a never ending battle against corruption. I admit I am a little upset because I spend much of my own time preparing cases, hours of computer work, preparing pictures, cds, and hours or research that is never paid for by the city. In fact if you want to improve Chicago, Daley and his Administration fight you the entire way. The payoff was great today again today because the two investigators, the only employees for the Department of Water Management actively enforcing the taxpayer’s safety won another court victory. Every single case has resulted in additional income for the City of Chicago and less for the Plumbing Inspectors with their bribe taking agendas. Every single case has been a victory for the City of Chicago and the taxpayers. The Water Department shows gratitude by shortening my pay and hours served.
On another matter, Mayor Daley and the City of Chicago quietly approved another three million dollar contract to locate utilities in Chicago. The last company Adesta, located in the suburbs, had the same three million dollar contract that ballooned to over eleven million dollars! I do not know how many times I went to a Peoples Gas Company job when Adesta mismarked the water service and the gas company pulled the water line causing flooding and additional damage. I always demanded 803 requests to recover the taxpayer’s money, but the guy in charge was downstate on other business.
This month the new underground utility company is feasting on millions of dollars of taxpayers’ money. The company is named Utility Resource Group located in Michigan, yes the state of Michigan. Mayor Daley should explain why Mr. Bigshot is sending Chicago Taxpayers money to another state while we starve and remain un-employed. Maybe Mr. Bigshot was his Michigan house and wanted to impress everyone on his ability to get a multimillion dollar contract to his friends. On the first day I found these people from Utility Resource Group, an employee showed up in a leased mini-van and had the entire Department of Water Management plat book on his computer. He makes sixteen dollars an hour with full health benefits, has access to the lives of every Chicago citizen. He does not need to live in Chicago and his company is not located in the flippin state. He does not need to pay Union dues despite doing the same work. This company does not have an office in Chicago, nothing. Daley must be insane; Chicago citizens are out of work. This company gets no furlough days, nothing! Mayor Daley, who set up this deal? Who got a cut? Any ideas? Why was the last company removed? When did the bidding process start? The job I was on did not need this company called or hired. If a Water Department foreman for the City of Chicago needs a private company called out to locate the water main, then Mayor Daley and his goon’s pick for foreman make Chicago the laughing stock of the world. How in the world can anyone justify calling a private company to tell a municipal employee whose job it is to know where the water mains are, where the water mains are? To really make matters more ridiculous, the low level dispatch employees have the authority to call these companies at anytime. Folks, this is a scam contract, a fraud, and a bad deal for Chicago Taxpayers. These people are going to go way over the contract and double the work the City Workers already get paid to do. Nobody from the department is verifying their work, WTF? I demand an investigation NOW. Patrick McDonough, Chicago’s most prolific Whistleblower.