June 8, 2010 Saul Charak has a long legal battle to return back to work that rested today. Saul was terminated from the City of Chicago for an alleged residency violation. Saul is a person that endured anti-Semitism for his entire tenure while employed by the City. Many City employees will never have a chance to clear their name or receive proper representation and return back to work. I overheard a conversation today in the Chicago Department of Human Resources that confirmed my suspicions; some people have greater access than others. Some former employees will wait longer and some former employees will suffer longer before the return to work. (If ever)
As you spend more time in court, you notice patterns and the way people act when they testify. You can observe nervous, scared, and confident witnesses. As someone that became involved in Saul misfortunes as of late, I decided to observe today's hearing. I was concerned because Saul is one of the most generous persons and helped many Chicago city employees when faced with troubled financial times. During Saul's employment with Chicago, he was ridiculed, teased, both physically and verbally tortured because he is Jewish. Saul also suffered because of his health concerns and his advanced age. As far as I can tell, I think the hearing officer was fair and impartial. I could also tell everyone was looking forward to wrapping up the hearing and just move on. Today, I noticed several things that were of great concern to me. Witnesses under subpoena did not show up to court, not just once but several times. The city has not been cooperative in producing witnesses in the past and now make defense lawyers jump through hoops to obtain city employees to testify. I find this an insult to the American justice system. Every witness should appear if a fired employee wants to get their job back. I also think all of these cases should be appealed to a real official judge, a sitting judge voted into office by the people. This setup is no different than the 400 west Superior hearing center that is ripe for a visit by the F.B.I.
In sworn testimony, it was very obvious the denials and lack of concern or responsibility given to Saul when he was attacked physically and verbally. The City of Chicago defense was to object when Saul provided proof. It really bothers me when bosses leave a worker to their own devices when physically attacked. I also do not like when responsible parties trained in the law wash their hands of supervisors ducking their responsibilities. The investigations are not transparent and leave the taxpayer's on the hook if challenged.
Chicago did not challenge a boss telling a Jewish subordinate, "blow out the fire in the ovens". This was according to sworn testimony by a witness, stunning. Another employee also testified to the best of his ability but was stopped continually causing him some confusion. After this man testified, I interviewed him in the hallway. He said, "They referred to him (Saul) as, "The Jew". He also said he was intimated and a little confused. He was upset because, "he was not able to talk about everything and the way you (he felt) feel". He also said, "They should have had a Spanish interpreter, but he did understand what they said". Under oath the following was general statements, "Saul was treated differently because his nationality, they were coming after him since 2008 and he was treated different. I wish Chicago's top journalists take the time to see what goes on at these hearings. Mayor Daley should investigate the way Jewish workers are treated by his Administration. Shame.
On another note, the bid for Chief Plumbing Inspector is going under much closer scrutiny, please call your clout (Madigan) and the 19th ward goons and tell them play stupid if the FEDS call. Several complaints were made regarding the bid process. In a video made last week, I told you who was going to get the job. How did I know? How do you ask? Same way Sneed finds out everything. Night!

Well not quite. Make sure you keep a close eye on the impending lawsuits against the Department of Water Management. Read the article by Fran Spielman. Click on the extended entry. END_OF_DOCUMENT_TOKEN_TO_BE_REPLACED 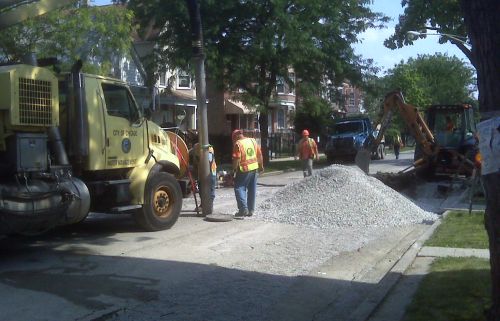 It was Sunday morning and I heard it again, “I like working for Jesse, you know you will get your time.” I got my assignments for the day and I was kept away from that job site. My radar starts pinging when a certain chain of events occur. That is the advantage of experience. I called the foreman Jesse Canet and let him know I would head out to that job and watch what was going on. He told me it would not be necessary and I was not wanted. Many times after work, I watch the progress of overtime jobs to gain insight into loafing and general waste. I was told that morning the job would not go over 8 hours. Sure enough it did. The foreman screamed out of the Sunnyside yard and took his car to the jobsite at around 3:00 p.m. Since he always worked out of the City Truck, this peaked my curiosity. I called the big boss and was told not to interfere with the job at 2242 North Spaulding. I explained I was concerned about the overtime and possible waste of taxpayers’ money. When I go to these jobs, I do so as a journalist and videographer. I enjoy my website and the knowledge it imparts. The first information I got was from the night investigator crew and it sounded funny like some overtime was made for Jesse’s crew. I also talked to a high ranking official that told me the crew waited much of the day for a Vactor. A Vator is a large sewer truck that is basically a jet rod and massive vacuum. When I went to the site, I saw in my opinion, a three or four hour job. But on Sunday, and double-time an opportunity like this could make for some powerful paychecks. I was also surprised because Jesse Canet was not on the overtime list. The overtime list has foreman and plumbers that have no interest in working overtime. That way the boss can put his friends and pets on these lucrative jobs. As soon as I arrived, the work began at a furious rate I have never seen before. I think it was because I was videotaping. Two of the workers were covering their faces. It was brought to my attention the crew was mad because a “rat” was watching. In the past a job like this would have gone for 16 hours. That would mean a paycheck of at least $1440.00 on top of a $4,000.00 bi-weekly take home check. At around 4:00 the work was going fast and furious, the crew was done at 4:30 p.m. I think I heard Jesse Canet say swipe out at 5:30 p.m. One hour travel time at double time. Earlier in the day the big boss told me Jesse is the only guy they can get to work the overtime. His caulker always seems to get the overtime with him. The call from the leak desk was water in the basement; I think we all got soaked again. Amazing how I found out the basement is a full basement and unoccupied, hardly an emergency. I was told this is a clout job. Clout is really expensive in Chicago. If the basement was occupied, someone needs to pay taxes. Welcome Commissioner Powers, the game stays the same. Photo by Patrick McDonough.