Mayor Daley ordered the dead folks at O’Hare removed so his great Airport expansion could continue. On June 26, 2010, Mayor Daley special contractors were dumping waste water on the graves of Chicago dead,, buried and looking for eternal rest. The entire area has hundreds of gallons of dirty and stinky waste water soaking into their gravesites. This has been going on time and time again. I have seen an absolute new low with Daley’s contractors. I caught this contractor several times and nothing is being done. Where is Mayor Daley? Where is the Office of the Inspector General? Photo by Bruce “The Alderman” Randazzo. Who is watching the henhouse? 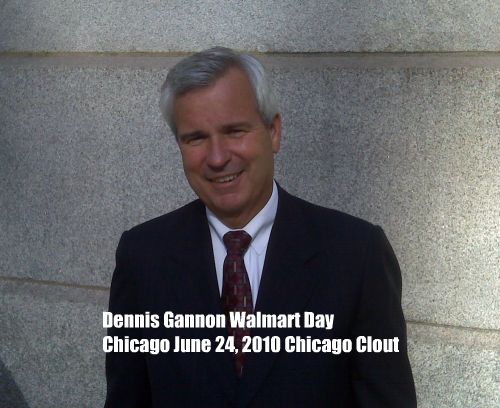 Another losing day for Chicago unions. Walmart brought the buses right onto the north side of Chicago City Hall. They loaded and rested between the James Thompson Building and the Daley City Hall. Mayor Daley rolled out the carpet after the Walmart meeting the FBI missed and the deal was cut. I saw Dennis Gannon today after the deal was agreed and for the second time in a while, Dennis looked very drawn. Daley had his armed goons parked on LaSalle and the deal was done. I have been very tough on Dennis Gannon for quite some time, but I can understand when the battle takes its toll. I admit I have been very tough on Chicago labor, but they have folded and left their worker’s cupboards bare. I also saw Robert Ryan, today and again he was friendly. Robert Ryan at Chicago City Hall today spells a sellout for workers every time. Chicago labor knew for quite some time they should have retired and let the new warriors take rein. Their greed is the downfall of every working man in Chicago. It always was about them and I know Daley will get large concessions on upcoming labor contracts. “A million dollars is a lot of work” Dennis Gannon told me today. I was going to remind him the meter deal was a lot of money also. Dennis has done much for Chicago Labor, but he should have left when the getting was good. The old fools are going down with the ship. As much as I hate to admit, Daley won, China won, Chicago taxpayers lost, Union labor lost. Walmart will feast on the taxpayer money with link cards and the unemployment level will increase. With Daley it is about power, not making good deals. Photo by Patrick McDonough.

Mayor Daley has helped many people become wealthy beyond their wildest dreams. Today, my crew needed to load up on fuel. Tadin’s goons were moping around the 700 block of North Kilbourn in Chicago, Illinois. They were working at the Waste to Energy Facility. Tadin also had a pick-up truck, a second truck, and had a trailer parked on the facility. The City of Chicago Department of Water Management has many trailer beds and a trailer with city worker’s cars parked. I never see any work getting done. This afternoon, the goons were enjoying opening City of Chicago Fire Hydrants full blast, wasting precious water. Mayor Daley will keep his friends doing nothing at this site. I think the Chicago Office of the Inspector General needs to look into this do nothing site. How does Tadin and the Department of Water Management seem to share the property? Mike has family on the Water Department payroll, so let’s start there. Photo by Patrick McDonough.

This bid was hidden from the posting process for a week. It is called fraud. It is called a Shakman violation. The job pays $97,760.04 base pay. The candidates considered will not need any special licenses. I was told this is for the sewer workers. In the old days you needed a real plumber's license to become a boss in the Chicago Water System. This job was called a District Foreman in the times of yesterday. The name was changed just after the Hired Truck Scandal. The City of Chicago does not need more guys making a hundred thousand plus dollars playing computer games. Is Mayor Daley going to get rid of the Water Department consultants? Election time is near folks.

Last week, City of Chicago Operating Engineers Local 150 fired up their Doosan Front end Loader. Some call this work of beauty a Wheeled Loader. Mayor Daley made damn sure his part time engineers, subject to multiple unpaid days and furlough days have the best brand new equipment made in Korea. “It makes a lot of sense”, said a couple of former gay pride parade event organizers that are some of the best political operating engineers at the City. “This is a political job and you need to trust Mayor Daley knows what is best for Chicago”, said one big handsome operating engineer. Another said, “I enjoy the time off to try out my thong at the beach”. Many Chicago City workers and taxpayers are furious Daley did not give the work to a company located in America. Some unemployed taxpayers have no food on the table and think Obama is selling out the country. I am quite certain Daley and Obama will watch Americans starve and suffer while these goons make deals that are destroying our country. Americans are out of work and can not pay Daley’s property taxes, Daley buys Korean heavy equipment, who sold out America again Richy?

One of the greatest problems in government is perception. People sometimes expect too much from our elected officials. Many governmental administrations are full of friends and family of elected officials that abuse privileges and give the perception of corruption, waste, and mismanagement. Yesterday, I noticed a Municipal Plate on a black crown Victoria. When I pulled up, I noticed a man with his son and a dog jumping around the back seat. This occurred June 11, 2010 at 7:00 p.m. The car was heading east bound on Peterson Avenue; they passed Lincoln and California Avenue. I hope taxpayers are aware this happy family did not need to pay for gas, insurance, and maintenance. I am sure the taxpayers would be on the hook if this family was in an accident. Folks, no one should be in a city vehicle expect a city worker on city business. This is theft and misconduct. Please have the person driving a black Crown Victoria with municipal plate number M 145496 contact us at Chicago Clout for some nice family pictures. Let’s watch what the Chicago Inspector General does with this dude. I would expect Daley to abuse this privilege, not anyone else. Photo by Patrick McDonough