Just a couple of days ago, I had an inspirational phone call from my favorite Alderman in Chicago, Robert Fioretti. Robert Fioretti is the well-respected Alderman in the 2nd Ward. Robert is facing personal challenges with his health, but things are looking better every day. Make sure you say a prayer for Robert's continued improvement and we pray he is back in the saddle for the 2nd Ward. God bless you all this New Year! Thanks for the "Hello" Alderman!

Have a Happy New Year all my friends that like Chicago Clout. Please enjoy this New Year and I hope you help clean up Chicago! Mayor Daley leaves a big dirty diaper. Photo by Patrick McDonough

Do you really want Rahm Emanuel the next Mayor of Chicago? This photo is by Patrick McDonough. 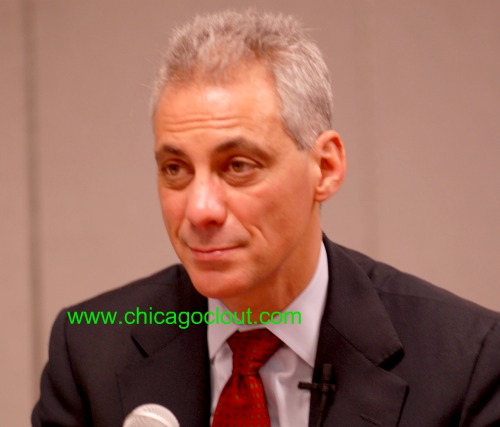 We have a great T.V. Show on the objectors to Rahm Emanuel’s attempt to run for Mayor of Chicago. No matter what you think on the matter, most of Chicago’s taxpayers have no clue on what the law is and what the requirements are. The objectors will explain why they believe Rahm is not eligible to be on the ballot. The facts on the case were muddled and I think the Chicago media needs to get teeth on the residency laws and regulations. I have been asking for this for years, but I am not pals of the Chicago Political Elite. We have a well-known lawyer and a certified expert on residency law to put the pieces together. So bring an open mind and learn the story behind the story. I am also going to ask some big shots in the Chicago media if they would like first crack at this story. We at Chicago Clout are a support service to the big guns. Photo by Patrick McDonough. Rahm Emanuel was tired when I took this picture. When he was fresh in the morning, he does photograph well. The morning photos I took of Rahm were really great. Patrick McDonough Objector 007.

Chicago Clout is inviting Ms. Lewinsky on an all expense paid trip to Chicago this January to help "get it out" for Rahm Emanuel. We will update you soon. 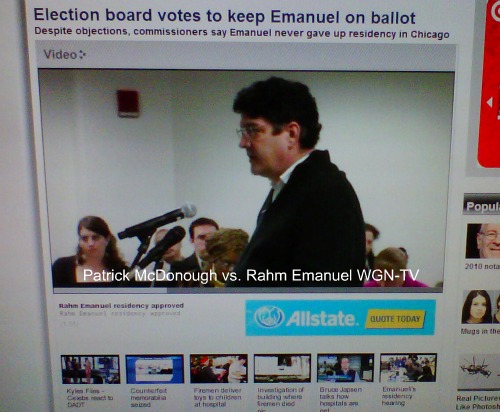 Thanks to WGN and ABC7 News. I had a chance to voice my opinions with the objectors in Patrick McDonough vs. Rahm Emanuel. No. 11-EB-MUN-007. This was on December 23, 2010. I will have a T.V. show soon so you can meet some of the objectors in person. The Chicago Media is joke in their unabashed support of the Rahm Emanuel’s Residency case. Many valid points were made and never played on the air. I also objected to the behavior by Attorneys from Mayer Brown LLP. This company makes millions of dollars from the City of Chicago and taxpayers. Is this because the City of Chicago lawyers are not able to defend a complex case? I think the law department under Mara Georges needs a cleaning. If you vote for Rahm, this will never happen. This photo was taken by Patrick McDonough from the WGN-TV website. I hope they do not mind since it is a picture of yours truly. God Bless all of you and all the people trying to clean up politics in Chicago. I hope you have a great new year.

December 23, 2010 Rahm Emanuel will be kept on the ballot. Marisel A. Hernandez, Commissioner of the Board of Elections left work early after the Rahm Emanuael results loaded down with bags full of gifts. It looked like Christmas gifts. It must be great to just “go along to get along” in Chicago politics. All she did was sign her name and collect the gifts like a good, loyal girl. Photo by Patrick McDonough.

Attorney Russ Stewart examined Rahm Emanuel in the case Patrick McDonough vs. Rahm Emanuel. Rahm Emanuel is attempting to get on the ballot for Mayor of Chicago. Russ Stewart is also a columnist for the Nadig Newspapers, here is an excerpt of his take…. Number Three: It’s not over until it’s over. Judicial creativity will keep Rahm Emanuel on the Chicago mayoral ballot. And he will be elected mayor.
This columnist, as the attorney for one of the objectors to Emanuel’s candidacy, had the opportunity to directly examine Emanuel on Dec. 14 at the city electoral board hearing. A Stipulation entered by Emanuel’s lawyers conceded that he and his family were “principally present” at a Washington, D.C. rental home from June 30, 2009 to October 1, 2010.
I asked Emanuel whether “principally present” meant that he “lived there” for that period. Answer: Yes. I asked if he “resided there.” His lawyers objected.
I asked if Emanuel was “principally present” anywhere else. Answer: No.
The Chicago Municipal Code mandates that a candidate is “not eligible” for municipal office unless he/she is a “qualified elector” – meaning voter – and has “resided” in Chicago for one year prior to the Feb. 22, 2011 election. Emanuel re-registered to vote and took up physical residence at 754 N. Milwaukee Avenue on Oct. 5, 2010. Under city ordinance, he needs to prove “residence” since Feb. 22, 2010.
I asked Emanuel, who was the White House chief-of-staff, how many times he was physically president in Chicago from February to September 2010. Answer: Twice. He said he flew in for a political event, and stayed overnight at a hotel.
Emanuel, of course, rented his Ravenswood home for a year from Sept. 1, 2009, and extended the lease to June 30, 2011. Had he kept the home vacant, and his belongings present, Emanuel would not have this “residency” problem
But Emanuel is the sole remaining white candidate on the 2011 ballot, and a phalanx of political insiders have a vested interest in his election. They cleared out the white field for Emanuel, and don’t relish the prospect of a Hispanic or black mayor. The electoral board decision will be appealed by the loser to the Circuit Court, and by that loser to the Illinois Supreme Court.
Judges can fit the law to the facts, and ignore the facts as they relate to the law. When Emanuel voted by absentee ballot in the 2010 primary, he did so from his rented home, where he clearly did not reside. A city statute states that if one has “lost his residence” due to “business of the United States,” then his vote is valid. Emanuel was not in the U.S. military. He was a political appointee of the president.
My prediction: The Illinois Supreme Court has a 4-3 Democratic majority. Expect a ruling that Emanuel’s non-residence was due to federal “business,” akin to military service, and that he is entitled to ballot placement. When that occurs, the election is over. Emanuel will be the next mayor. Photo by Patrick McDonough (Russ Stewart is an expert on Election Law and picked as one of the three principal lawyers in the case)

Patrick McDonough, one of the objectors at the Rahm Emanuel Hearing, continued to keep a close eye on the proceedings. Last night, all were tired and sometimes that is when some funny business can happen. Mr. McDonough asked the Hearing Officer Mr. Morris to keep a close eye on the activities of some of the attorneys. When Mr. Emanuel's witnesses were on examination and cross-examination, the witnesses would continue to look at Rahm's Attorneys. One of the Attorneys would grunt, cover his mouth, and have an assortment of movements that was followed up by an immediate, I do not recall. This was put on the record and a much closer watch was put on the Attorneys. No one Attorney was accused, but it is very important for all lawyers to act in a proper manner. The witnesses for Rahm went to the lawyers offices for preparation and were informed of the issues. One dude was bragging about the $125,000.00 to 150,000.00 he gave to Rahm's Mayoral Run. He was not sure just how much. He continued to make a wild assortment of faces, yawning, smiling, and boredom. I watched him laugh with Rahm's lawyers, like he "hit the ball out of the park". He returned later at the end of the hearing to listen to the Lawyers tell him again what a great job he did. Sometimes in life, you are the last to know.