The Chicago Gay Pride Parade has some tires slashed by some 11th Ward goofballs. Almost every reporter in Chicago felt a need to defend the gay community. They were so outraged. The big quote was Kelly Cassidy just another political hack from the Andersonville and appointee because she is gay. She replaced Harry Osterman, another one trick pony that never did a mentionable thing in the state house. Both of these goofs will not debate and hide behind the Democratic Party. Both are professional victims, making a republican ransom for their services. I wish the reporters would just talk about the Gay Community's agenda and what they are trying to accomplish. I think the Gay community is a little farther along than the press gives them credit for. I just want to know how this could happen with new Mayor Rahm Emanuel? Where are the cops we were promised? Good night dudes. 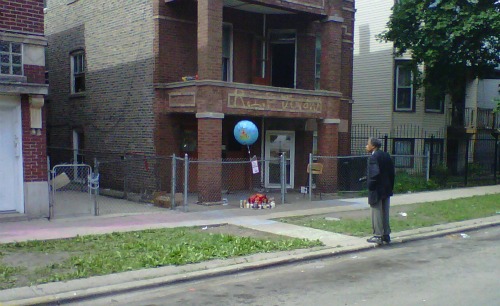 The Rahm Emanuel Administration in Chicago has been making some progress moving Chicago in the right direction. Richard Daley and the Irish Hillbillies from the 11Th Ward have looted Chicago to bankruptcy. Along the miserable ride of the Daley Administration was the horrible screeching, bellowing, and barking of the Shannon Rovers. The Shannon Rovers are a bunch of wild men and women giving Irish music a bad name. I hope to never hear these ear ache makers again. The Shannon Rovers are out and the Tel Aviv Troubadours are in. The Tel Aviv Troubadours play some of the most beautiful music known to mankind. The musicians are classically trained in the finest Universities in the United States. We are looking for some back-up players in case we have a gig at the Chicago Symphony of the New York Philharmonic. Please contact us at Chicago Clout to be part of the best band in Chicago! Patrick McDonough.

June 5, 2011 was not a good day for City of Chicago Department of Water Management Plumber Patrick McDonough. Another employee took it upon himself to allegedly call Patrick McDonough a “fu*king Asshole.” Patrick McDonough takes pride in keeping his assigned vehicle clean and neat. Night crew workers have been sleeping all night in his truck, wearing out the air-conditioning, and taking parts to fix up their trucks. One of the laborers took some stolen parts back from another driver’s truck, and you guessed it, Patrick McDonough got blamed. This is the third alleged assault from this driver according to sources. This driver was caught smoking in the trucks before and a verbal reprimand was given. A boss blamed the leak desk when they were not able to get ahold of him. Another assault happened again while the Plumber was attempting to leave home. The Chicago Police were called and the driver admitted to the verbal assault. The police said this is an internal matter and left. They said the same thing when a State Senator Munoz’s brother also allegedly assaulted another city worker. Both workers were drug tested which makes no sense at all. The Violence in the Workplace rules were not followed and the Water Department has still not made provisions to assist the victim with needed paperwork followup. Supervisors were also interfering with attempting to settle the matter “off the books” on Wednesday. The Office of the Inspector General are still not providing answers. I will get back to you on this story as things progress. If we have zero tolerance, let’s have zero tolerance. The alleged offender had family fired from the Hired Truck Scandal from the Water Department, time to let the grudge go dude! The victim was kicked off his new truck and thrown into the oldest junk truck in the fleet. It is called retaliation. ]]> END_OF_DOCUMENT_TOKEN_TO_BE_REPLACED

On June 8, 2011, Paul Hansen finally got to address to City of Chicago Department of Water Management employees in the North District. Paul Hansen got a chilly response despite the very hot weather. Some employees in this picture were wearing shorts knowing the day would be close to 100 degrees. Paul Hansen told the workers he wanted them not to wear short pants again. Paul does not wear shorts anymore because he works in a very cold and chilly air-conditioned office. At $107,000.00 dollars, smackers, greenbacks, I would wear long pants also. Paul was in the newspapers for an alleged DUI he got when hunting in Geneva. Most Chicago City workers get fired when this happens to them. Somehow the Office of the Inspector General allowed his promotion to go through despite other employees claiming the promotion was rigged. Paul job requires a driver’s license and when suspended allegations of mileage reimbursement funny business continued to be made. Paul Hansen revealed new work rules that included parking in the residential area around former Alderman Pat Laver crib. The 45Th Ward’s new Alderman best take a look at this policy. Also, workers were reminded to go into the yard to swipe in and out. No more shortchanging the taxpayers anymore. The Office of the Inspector General got wind of edit sheets used on overtime jobs recently. The North District yard was just cited for violations with the Illinois Department of Labor. Several workers agreed to petition the neighbors to call Rahm Emanuel to stop this practice. So far the Office of the Inspector General has done nothing to stop the flash mob workers at the District, racing out to taxpayer’s homes, underbidding and hustling side business. This scam has gone on with leak desk workers giving inside leak complaints to certain investigators, kicking back cash to the bosses. It is time to keep the corruption, bribes, scams, payoffs in full swing, just wear long pants when you do it. It looks more legit. Patrick McDonough

Rahm Emanuel released a list of all the current employees on the public dole. I guess Rahm wants to make an impression he is trying to change things. Several names are missing. I noticed some names on workman’s compensation not listed. See list
http://data.cityofchicago.org/Government/Current-Employee-Names-Salaries-and-Position-Title/r3km-swf6? Rahm tells us he is for change but he knows he must play ball. Rahm is quietly putting another couple of million dollars of payroll and political payback on the backs of taxpayers at the Department of Water Management. Rahm forgot to list some former Alderman’s kid’s raises and all the new mystery employees Daley packed on last year. Rahm is keeping these big rollers despite claiming cutbacks. For starters, union office workers were tossed out of water department satellite offices and the workers were replaced by Laborer 1092 ditchdiggers to handle office chores. I do not think the Chicago Taxpayers want to pay someone $35.10 an hour for data entry. I do not think politically connected laborers should enjoy air-conditioned offices to answer phones. More stunning is the attempted hire of an additional 10 Plumber’s Local 130 members at $44.00 per hour. Plumbers are at an easy $100,000.00 per year. A raise is due very soon. Rahm knew when he got in bed with Plumber’s Local he would need to step to the plate and pony up jobs. A large percentage of the dues Plumbers pay is filtered back to politicians. Many of these Plumbers sit in an air-conditioned office all day and do relatively few chores. One example is former Alderman’s son Paul Hansen, making a whopping $107,000.00 thousand answering phone calls and data entry. Paul Hansen was just promoted despite formal complaints to the Office of the Inspector General and the Shakman Monitor. The position of Superintendent was not filled for many years with great savings and success. It looks like the Office of the Inspector General is just another tool of the Mayor’s office. The Commissioners on a routine basis shut down investigations, rendering the OIG a waste of taxpayers’ money. The Laborers Union was rewarded for support to Rahm Emanuel by the addition of at least another 10 construction laborers paid to inspect the same holes in the street day after day. In fact, construction laborers drive air-conditioned pick-up trucks doing very little wasting precious gas. It is all an act, the public think work is being done. These workers were hired to repair and install sewers, not drive around and look at them. The only major improvement was the General Superintendent that enforced work rules. Workers were busted for sleeping on the job because the Office of the Inspector General was a no show. This was again covered up and the taxpayers got screwed. I suggest the millions of wasted money are invested in new investigators at the Office of the Inspector General. But we must immediately stop commissioners overstepping OIG rulings and tell the OIG not to recommend every violation a termination. Patrick McDonough.