Time to fire Commissioner Randy Conner of the Chicago Department of Water Management. As a cement finisher, it made no sense to have this man as a Commissioner. Today, I had the honor to witness Garry McCarthy on his local campaign to listen to the problems Chicago Business and homeowners are having with the Management team Rahm Emanuel put together the last 8 years.

I am certain Garry was not ready for the many problems businesses have with an already competitive environment.  The world is a tough place to compete. The last thing you need is a City that makes a lousy attempt to provide needed services you are paying for. Safety first Chicago.

One such story revolves around Slidematic, at 4520 West Addison in Chicago. I was impressed by the neat and clean workplace and the many steps they have taken to provide good jobs for Chicago residents. Chicago needs every job it can get. The last thing Chicago needs to do is give a company an excuse to move to the suburbs. Mayor Rahm Emanuel has spent far too much time and effort on the downtown area.

I just got off the phone with Kathleen at the DOWM main Jardine Plant. She assured me an investigator will look into my concerns and get something done. Thank you, Kathleen, that is what the public demands. Special thanks to Garry McCarthy.

They said the same thing with Hired Trucks. Please note: Jay Stone and Patrick McDonough are going to finish you off. You are finished. Bye Bye.

I had the honor to interview Michael Scoggins of Killer Seafood. Michael’s famous business was wiped of the map in the City of Mexico Beach, Florida. Michael has been giving his time day and night to the people attempting to put the City of Mexico Beach back on the map. He is making food for people attempting to put this disaster behind them. Hurricane Michael and the damage will not go away anytime soon. Please help Chicago. Be part of the #850strong folks. Michael is one of the chef’s at “Camp Happy Tummies”.

Please help. Chicago should make its presence known. I am not taking any donations on Chicago Clout. Go to Killer Seafood Facebook page to learn more. 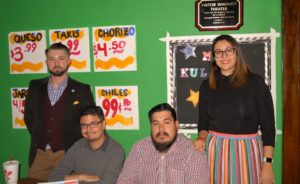 In Chicago, the 14th Ward has many concerned citizens. The 14th Ward has an active IPO or an Independent Political Organization. On November 9, 2018, at Nightingale School in Chicago, the IPO made an amazing presentation of the health of the 14th ward. In the presentation, the group outlines all the necessary statistics that tell you what the makeup of the Ward is. Facts included the wealth, lack of wealth, the neighborhoods, the poverty levels. The facts also reflect the minority makeup, resident’s financial situation, and a number of residents on food stamps. I feel the reason for the fact giving secession was to relay the facts based on information provided by government agencies.

One of the most telling sources of information is from the Illinois Sunshine Organization. I hope the residents in the 14Th ward understand the massive campaign donations to Ed Burke are pay to play. All this money goes in Burk’s pocket and his wealthy pockets. The 14Th ward needs massive campaign infusions and Burke failed to deliver. Burke took almost every penny from organizations outside the ward. Burke took lots of money from President Trump and many Republican organizations tied into companies that do business with the City of Chicago.

Just like the Irish went to bat for the Irish many years ago, the Hispanic majority must come together to elect Hispanic leadership to reflect the ward. Burke is out and outstayed his welcome. Reach the 14th ward at [email protected]  Just get the facts.

The City of Chicago needs young fresh talent to revitalize the neighborhoods of Chicago. One of the wards in need of leadership is Chicago’s 14th Ward. I was impressed by Jose’ Luis Torrez as he was very passionate about his ward. Jose’ has left no stone unturned, he has been knocking on every door and listening to everyone in the ward. Jose’ is also bi-lingual and very well educated. Jose’ has the pulse on the 14th ward.

Jose’ nearest rival is Jamie Guzmán. Jamie is also well spoken and bi-lingual. Jamie is smart and sophisticated. Jamie would be our second choice for the 14th Ward.

The 14th ward has been left in a state of disrepair by Ed Burke. Burke has used the Aldermanic position to reward his fellow alderman in different wards to increase power.

When I asked Alderman Austin why this was, she said, “That’s the way it is”. Burke has used his position to reward his family and friends. Burke has no clue any more and fails to deliver the goods. The residents in the 14Th Ward want someone that looks like them, talks like them, and fits into the community. Burke has left the 14th ward lacking the amenities the rich wealthy wards take for granted. What a shame, Burke kept all the cake for himself and his suburban elite friends. Burke could have planted businesses that do work with Chicago in his ward. Shame on Ed.

The City of Chicago and the State of Illinois is under “termination orders” from the J.B. Pritzker transition team to terminate the corrupt leadership at the Illinois Workers’ Compensation Commission in Chicago. Constant complaints since Rauner ordered nazi termination rights of injured union workers will begin in earnest soon. Many injured workers were expecting a fair day in court and instead the workers’ compensation lawyers association have been instrumental in destroying fair settlements that were supposed to benefit injured workers. The system is so corrupt the Federal Government is needed to step in to protect people with no rights. lawyers are making deals that benefit themselves for a quick dollar. Lori Lightfoot, Paul Vallas, Garry McCarthy, Willie Wilson, and Susan Mendoza promise an immediate change to Alderman Burke and the Corrupt Committee on Finance corruption. Alderman Burke and Mayor Rahm Emanuel are in Federal Court with their political lives on the line. Candidates like  Jose Luis Torrez for 14th Ward Alderman are aware of the evil Alderman Edward Burke and his political goons fixing races.

Please enjoy this video made at the Park Ridge Public Library November 7, 2018.