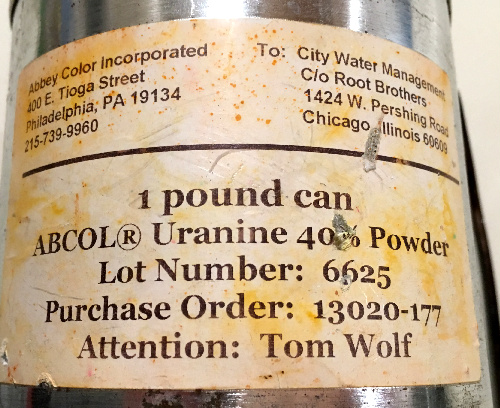 Many people want to know how the City of Chicago and Plumber’s Local 130 dye the Chicago River Green. The newspapers call the mixture “Irish Fairy Dust”. I suppose that is not good news reporting. The Chicago Saint Patrick’s Day parade is a great parade and I have marched in everyone my entire life until I got hurt. Many of the guys that place the powder in the water have ended up with awesome jobs with the city. The secret powder is Uranine. Please see the picture of this powder. Uranine is also called “Irish Fairy Dust”. Most versions of this powder is about as safe as the Lead water pipes serving most of Chicago safe drinking water. The City Water Department supplied the powder with taxpayer money since the beginning of the tradition. I do not want this powder placed in the water any longer. But that is me. Remember, St. Patrick’s Day in Chicago is to celebrate the accomplishments of the Irish. It should not be a day to shame his name with excessive drinking. Happy St Patrick’s Day and God Bless all my Chicago Friends.

Thank you for your letter dated today. I have attached all documents for your reference
to save you time.

My response:
I am a member· of the press, registered with the Chicago Police Department. I have for
years attempted to obtain records from the Department of Water Management
(DOWM). The DOWM uses stalling tactics. The DOWM has been in the crosshairs of
several Federal investigations and several employees have been sent to jail. It is my
opinion; the same conduct and behavior is continuing. FOIA is to expose the secret
dealings and politics that control the DOWM.
If you go to my website, \V\V\v.chicagoclout.com you will see I am involved in several
stories that are of public interest. One is the death of an DOWM employee involved in a
cave-in. For almost two decades, I have reported official complaints to the Illinois
Department of Labor. A man is dead, his family will never see him again due to the
inactions of the DOWM and the IDOL, to make shoring a reality. I was also the victim of
safety violations at the DOWM. Nothing has changed.
Chicago taxpayers pay millions of dollars to injured city workers that cannot show up to
work due to negligence at the DOWM. Some injured workers are also subject to
retaliation depending on their politics or lack of politics. The DOWM has a “job search”
program with no clear-cut policies. My original request was for one month of these
searches so I can determine if the taxpayers are receiving a good “bang for the buck”. I
also want to make sure all injured workers are subject to the same rules and regulations.
I broke down the prior request to one week while I am waiting for your original ruling.
The weekly document total of that request is 24 pages submitted by injured workers.
Only six employees were required to submit weekly job searches per his FOIA response.
Mr. Litherland’s (FOIA officer of DOWM) document preparation math does not add up.
His time request is unsubstantiated. In this day and age, a public department with an
almost billion-dollar budget still using primitive paper management practices, seems
unlikely. The paperwork should always be made into a PDF, not faxed and stapled.
I was accused by Gary Litherland on “being on a fishing expedition”. Mr. Litherland also
wanted to release all 750 pages if I was willing to forego all supporting documents. I
want to have all documents to make a clear and concise report to the public. Gary
Litherland does not release documents in a timely manner. His department does not
have enough workers or his department is side stepping FOIA.
My requests will hopefully enlighten folks that have had unfavorable experiences in
workers’ compensation system run by Alderman Burke, the Chicago Committee on
Finance, and. the Department of Water Management. Thanking you in advance, I remain

As a City of Chicago Department of Water Management (DOWM) employee, I am concerned about the lack of movement towards removing Lead from the Potable Drinking Water Supply (PDWS) in Chicago. Not long ago, I made a FOIA request to investigate the private contractors entering and leaving the Jardine Water Purification Plant (JWPP) on Chicago’s downtown lakefront. The City fought my FOIA, so I asked Attorneys Loevy and Loevy to assist me in the fight. Matthew Topic of Loevy and Loevy did his best, but a Judge bought the City’s argument; if they disclose their contractors in and out of JWPP, Chicago’s PDWS would be in peril.  If you know how Judges are picked in Chicago, the ruling was not a surprise. A second look will happen now that Donald J. Trump is in office.

Chicago needs to do something regarding Lead in the PDWS. During the FOIA process regarding this contentious issue, the DOWM represented that they are responsible for the safety of all PDWS in Chicago, from when it is processed at JWPP until it exits the taps (Supply to all final users). Since that is the case, the taxpayers of Chicago stand to lose billions in Lead related PDWS lawsuits. I assure you, the Chicago Inspector General has done nothing to protect the PDWS of poor Blacks and Hispanics. Sad to say, but each and every day millions are drinking Water tainted with toxins. Many other municipalities are making headway to replace the Lead Water Services, i.e. Flint, MI. Remember; the coating inside lead piping only works if the Water Service is not disturbed. The current lawsuits state: when a new Chicago Water Main is replaced, a substantial amount of Lead is introduced into the Water Supply. What the lawsuit doesn’t know is that when the Lead Water Services are disturbed in any manner, the Lead is released and absorbed for children to drink in schools, i.e. Jose De Diego Academy, Chicago. When a Water Main break happens, the protective coating is disturbed, once when the Water Main is shut down and again when the Water Main is returned to service. When the piping is jolted severely, the coating is released into the Water Supply. People wonder after a Water Main repair is made, why the aerators in their home faucets are blocked. Now you know. After the DOWM works on a fire hydrant, shuts down a Water Main, makes any type of repair to the PDWS, the lead is again absorbed into the Water. Immediate Lead testing is needed each and every time an adjustment is made to the PDWS system. Not long ago, Alderman Tunney had a belt buckle and caution tape in his building’s Water Supply. That was covered up. When a private contractor turned a new Chicago Water Main on, all the contents were released including; condoms, dirt, oil, grease, sand and debris of every type. Incompetence!

Chicago’s Potable Drinking Water Supply is in danger. So, when you see any Chicago Department of Water Management trucks working on the Domestic Water Distribution System (DWDS), make sure you have your Water Supply tested. You will live longer. Demand that Mayor Rahm Emanuel hires more Certified Plumbing Inspectors, provides more Water sample testing, and make sure the DWDS is safe for all of Chicago. See you at final contamination.