Many of us know Rahm Emanuel is Jewish, during the campaign the schizoid press was looking for any hint of anti-Jewish sediment. In fact, when Rahm was in his residency challenge at the Board of Elections, one press outlet was attempting to sell me on the idea someone was making anti-Jewish comments. Now the press will not shut up that Rahm is Jewish. Rahm is a Jewish Mayor, etc. Chicago elected Rahm as the next Mayor of Chicago because we do not care Rahm is Jewish. Now it going to get shoved down our throats he is Jewish. Please stop doing that. Good luck Rahm Emanuel, that dumb Catholic Mayor Daley left you a dirty diaper. Patrick McDonoberg.

Thank you to Tony Joyce and his staff for the endorsement. We will also miss Randall Sherman that ran the committee for many years. The 48Th Ward might want to take notice these non-political endorsements. The 48Th Ward has been greatly shortchanged by a lack of debates with all the candidates. Some of the building boards have not allowed any candidates except their personal favorites. That is the way it is in the 48Th Ward.

Why Were City Trucks Idle During Blizzard While Private Firms Hired?: MyFoxCHICAGO.com 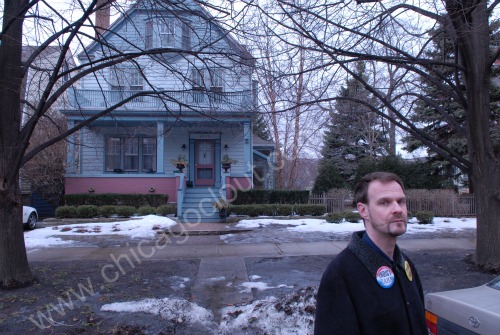 This is a picture of Rahm Emanuel’s property in Chicago. The address is 4228 North Hermitage. Jeffrey Joseph Black stands across the street from Rahm Emanuel’s rental property. Today, I prepared a long overdue story on clout and privilege in Chicago. Jeff was Emanuel Objector NO. 11. I, Patrick McDonough was Emanuel Objector NO. 007 in the Rahm Emanuel Board of Elections Hearing. I asked Jeff if he would allow me to video his interpretation of a story I kept for a long time. I am a licensed Plumber and evidence Rahm Emanuel produced during hearing opened a large can of worms for the mayoral candidate. I hope the Office of the Inspector General might take a second look at a Chicago Plumbing Inspector that squirmed off the hook in Operation Crooked Code. He worked under an indicted and convicted Plumbing Supervisor. I am not telling this story to pick on any one candidate; I will post another story on another candidate that is worse. I thank everyone for their assistance. I will have a video very soon. Photo by Patrick McDonough

"Rahm Emanuel doesn't live it. He's nothing but a Wall Street Judas," Jim Sweeney said on Tuesday. Well here you go in Chicago Politics with a Union Leader talking a lot of crap to stir up all the City Workers that never figured the Local 150 Operators sold out the City Workers long before Rahm ever did. Local 150 was one of the first unions to cave in to help with Mayor Daley's budget mess. Local 150 made tons of overtime and loaded up private non-union trucks during the snow storm. Local 150 workers load up non-union scab trucking every day on city property. So I think Jim should look in the mirror before he takes the stance he did on Rahm. Am I supporting Rahm Emanuel? A solid NO. Was Daley a phony and a hypocrite again? Yes. Folks, this is not an anti-Semitic issue. It is one of the pot calling the kettle black!
Patrick McDonough

Candidates blast political insiders
By Stefano Esposito Staff Reportersesposito@suntimes.com Feb 17, 2011 02:08AM
"Harry, could you please tell me how you think we could change the 48th Ward and make it better?" asked candidate Patrick McDonough, turning to the freckle-faced doll, a stand-in for state Rep. Harry Osterman.
The ensuing silence was a funny moment in a race with a nasty edge. McDonough, a Department of Water Management worker who hosted the debate as a feature on his political website, and wine merchant Philip R. Bernstein say the ward has been governed for too long by political insiders. They point to the fact that Mary Ann Smith, the current alderman, once worked for the late Kathy Osterman, who was Harry Osterman's mother and was alderman here until 1989.
Harry Osterman said he's his own man and is focused on talking directly to the voters — as he has for the last 11 years as a legislator.
"I'm out engaging the voters and running a campaign that's focused on the issues that people care about in our community," said Osterman, 43.
Both Osterman and Bernstein, 63, said expanding Andersonville's thriving retail to other parts of the ward is key.
Bernstein said the powers that be haven't done enough to either encourage quality retail in struggling areas or shift lower-quality shops elsewhere.
"They need to be relocated to areas where they're better supported," Bernstein said. "You don't take up a major thoroughfare like Broadway and populate it with used-car shops."
Bernstein said he would use his business background to reach out to thriving businesses in other neighborhoods and encourage them to come to the 48th Ward.
Osterman said, among other things, that he would work with existing neighborhood businesses, offering them tax-increment financing funds to encourage them to expand elsewhere in the ward, a tactic that he said already had some success .
McDonough said he's focused on shaking up the establishment and making sure all basic services get delivered to residents.
"It's not glamorous, but that's what people are paying taxes for," said McDonough, 50. "You're not paying taxes for pretty flags and all sorts of other pretty things."
Candidate Steve Chereska, a juvenile detention counselor, said he would seek federal funding to boost tourism in the ward, which also includes part of the lakefront.
Chereska said his lack of political experience is an asset.
"I'm a fresh face, a young guy who can't be influenced," said Chereska, 35. "I'm able to say no. It seems to me that a lot of people haven't said no for a while. That's why we have a lot of deficits and mismanaged money."
The election is Tuesday.
Thank you Chicago Sun-Times. I wish all the candidates in the 48Th Ward would debate the issues. We have some fine candidates and the voters want to know where we stand on the issues.

Quote for Mark Brown's article… Notably missing from this list is Harry Osterman, an aldermanic candidate in the 48th Ward, who was the beneficiary of a campaign mailing sent this week to 48th Ward voters on his behalf by For a Better Chicago.
For a Better Chicago indicated earlier that it might mail out campaign materials "independent" of a candidate, which arguably would not trigger a disclosure requirement. Such mailings are very expensive and could make For a Better Chicago a major player in the closing days of the campaign. Some opposing political operatives believe the group is holding back the bulk of its money to make a stronger play in the April 5 runoff.
Unquote.
Dear 48Th Ward Voters, you have 5 candidates for Alderman in the 48Th Ward. Please stop the machine.