You got it here first https://www.chicagoclout.com/weblog/archives/2008/04/daley_and_sorichs_nativity_of.html
City Water Department official target of probe
By: Robert Herguth Dec. 23, 2008
(Crain’s) — A high-ranking city of Chicago official with ties to the Daley family’s 11th Ward Regular Democratic Organization is being investigated for allegedly dispatching water crews to work on private sites, including a politically connected Bridgeport church.
The city’s inspector general’s office is trying to find out whether Deputy Commissioner Tommie Talley improperly ordered Chicago Water Management workers to fix or improve sewer and water pipes for private owners who should be paying for such work themselves, sources say.
Mr. Talley hung up on a reporter who called him Tuesday to discuss the investigation. A spokesman for the Water Management Department declined to comment.
A source says investigators are looking into a number of locations, including Nativity of Our Lord Catholic Church, the Bridgeport parish in which Mayor Richard M. Daley was raised.
The pastor, the Rev. Daniel Brandt, says a sewer did clog in the spring, and city crews worked on the public right-of-way. But the church hired a contractor to handle repairs on parish property, costing “upwards of 10 grand.”
“I’d open up my books to them and open up my doors to them to let them know the work on the property was fully paid for,” Rev. Brandt said. “I’m sure there was a day and a time when the city would do things, but that’s just suicide now, especially in the high-profile parish that this is.”
“We go above and beyond to make sure we have all the permits. . . .Any improvements, we make sure we dot all our i’s and cross all the t’s.”
Mr. Talley is active in the 11th Ward Regular Democratic Organization, which is run by Cook County Commissioner John Daley, the mayor’s brother. Mr. Talley also once was part of an affiliated political group headed by former First Deputy Water Commissioner Donald Tomczak, who was convicted in the Hired Truck scandal.
Several years ago, Mr. Talley was given a 15-day suspension following a separate payroll scandal in the department.
David Hoffman, the city’s inspector general, declined to comment.

The Directors of the Municipal Advocate General are convening in Park Ridge, Illinois to confer with Attorney Russ Stewart determining the best course of action for Paul Bacarella. Paul Bacarella is a decorated Chicago Police Officer that has put his life on the line day after day to make Chicago safe from crime. Chicago rewarded him by termination.
I went through Paul’s file and was impressed by the many awards he received for valor. Chicago needs more Police Officers like Paul. Paul was paid back by having a residency investigation that only found him in the suburbs. On a personal level, I know the pain he has gone through, the Investigators have a habit of never finding you except where they are told to find you. I hope at the end of the day today, we can chart a course to overturn Chicago Residency Requirements, and allow Chicago Americans to stop being pawns for Daley’s political system. Mayor Daley vigorously defends the rule. He once said, “If I’m mayor, should I live in Waukegan? If it’s good enough to work and earn your salary, it’s good enough to live.” Well I hate to tell an idiot like Mayor Daley, but he is an elected official and by law he must be a resident. In fact politicians are allowed to run in districts they are not an actual resident in.
Mayor Daley has a habit of traveling around the globe and allowing his friends and pals to pay his way. Mayor Daley is not an actual resident in Chicago as he spends a vast amount of time outside the country. I think many of the other major cities in America have figured out the waste of money following its workers, and have concentrated on investigating the millions wasted on corruption and theft. I think in Paul’s case a great injustice has burdened this man long enough. Based on Paul’s record, I hope many other actual residents and city workers are not accused of residency violation when Daley and his goons finger a Paul’s position for someone else. I hope many people read this story and help us change the system. I was always for the Residency Requirement in Chicago, but too many stories like this mean we need to change the rule. Photo by Patrick McDonough

Chicago Public Schools are some of the worst in the nation. The outgoing boss is Arnie Duncan; he has destroyed Chicago Public Schools. People wonder why the United States of America is going through rough times. Our leaders promote their friends and pals because they themselves are not trustworthy, so they need people to cover their backs. If I was at O’Hare Airport, I would help Arnie on to the next plane. Obama is putting the same bunch of politicians in power, so much for change. I am happy Chicago people are getting promoted to national positions, but I was hoping for change. Duncan is twice as tall as Mayor Daley, and reminds me of Herman Munster. Photo made better by Patrick McDonough.

Many people would like to star in the movies. Deep down many people live their fantasies in uniforms. The City of Chicago hired many Chicago Police officers to calm the storm in the Water Department. I do not know what the police know about water distribution any more than laborers know anything about acting. Double dipping runs in the Department, or so I have heard! Photo by Patrick “Deep Water” McDonough.

I am very happy to find out a very prestigious Attorney is part of the Blagojevich case. A former top flight Attorney from Loevy and Loevy is currently working for the Illinois Attorney General, Lisa Madigan. His name is Jon Rosenblatt, an Assistant Attorney General of Special Litigation Bureau. Jon Rosenblatt was the Attorney for McDonough vs. City of Chicago lawsuit until he took the new position with the Illinois Attorney General. I do not know if Lisa Madigan should attempt to remove Rod from office, it is almost like firing your own brother. I think we should leave everything to the FEDS, let them finish what they started. Maybe if Lisa could find out what Patrick Daley's interests were in his multiple Chicago Contracts we can let her handle bigger and better things. Too much inbreeding in Chicago Politics! Nice job Jon! Please watch this video from Channel 2 News Chicago. http://cbs2chicago.com/governor/lisa.madigan.blagojevich.2.885942.html Patrick McDonough 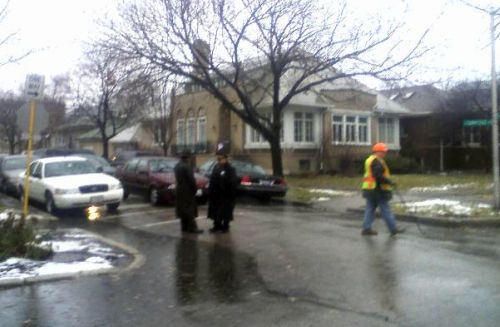 Illinois Governor Rod Blagojevich was arrested this morning at his home in Chicago. The home is located at the Northwest corner of Richmond and Sunnyside. Two Chicago Investigators, Patrick McDonough and Ron Bober were ordered by the Illinois State Police to investigate the cause of a cameraman falling into a large puddle of water. The camera was destroyed. Needless to say numerous news stations were covering the arrest of the current Illinois Governor. Also indicted was Mayor Daley’s right hand man and lieutenant John Harris. Remember, no one gets anywhere in Illinois unless Mayor Daley makes the call. Mayor Daley will always send one or more of his goons to make sure the 11th ward and the “Democratic Party” gets its cut. John Harris was a high ranking Chicago Cop and Budget Director under Mayor Daley. I strongly suggest Mayor Daley ratted out Blagojevich when the Feds were close to an indictment of Daley. I suggest a deal was made with George Bush to keep the Daley clan out of jail. Remember one thing my friends, the Chicago Department of Water Management did lots of favors for Patti Blagojevich and her Real Estate deals. I was not ready to be on T.V. today but that happens when you least expect it, right Rod? To all my T.V. fans, I hope I was not looking at the camera when the cameras were rolling, but I was on T.V. again. If you wish some pictures of Blago early in the morning led out by the Feds, let me know. Rod has a nice addition in the back of the house! Photo by Patrick McDonough. 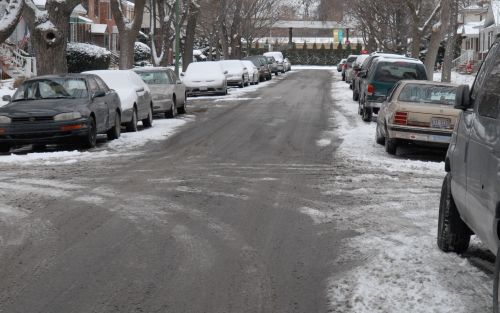 This is a Chicago side street of an Alderman with Clout. His street is salted like Mayor Daley’s. In fact, if you understand clout in Chicago, it includes the unfair and illegal use of services. Maybe Patrick Levar needs to run downtown and vote like the rest of our lousy Alderman that just rubberstamp Mayor Daley’s sale of all our valuable assets. Billions of dollars of taxpayers’ money looted like a drunken sailor. I think it is time the Chicago Newspapers take this bully to task, enough is enough. It is also funny Patrick “Phat” Levar does not visit the Sunnyside Yard anymore, must be the lack of “Hired Trucks”. Could also be the changing of the guard at the Department of Water Management? Everyone pays too much for taxes in Chicago, demand equal bang for the buck. Patrick McDonough

If it snows in Chicago and your side street looks like this, you do not have clout. Mayor Daley was skating on thin ice again when the Department of Streets and Sanitation failed to clear side streets. One of the Chicago Department of Water Management Operating Engineers was on ABC Channel 7 News as he was concerned about the lack of salt near Chicago schools. (Phil Sandburg) Many people know I get worried and lose sleep when kids are near intersections and a car could slide and hurt or kill a child. I am going to make sure Mayor Daley knows he should double salt any area our children are in. Kids do not have clout because they never learned to take a portion that does not belong to them. It does not take long to understand Clout in Chicago; just watch your tax money wasted on Daley’s friends and family program. Everyone pays tons of money in Chicago for taxes, time to clean the streets and avoid lawsuits. Photo by Patrick McDonough

Mayor Daley promised to not use taxpayer's money to pay for Barack Obama's victory speech in Grant Park Chicago, Illinois. The November 4, 2008 event was a big day for many white and black folks expecting great things from Obama. Chicago is a big labor town and when we work, we expect to get paid. Some of the security was handled by private contractors. The Chicago Police handled much of the outside perimeter work, and much of the security close to the stage was handled by non-union armed guards. Many of these guards do not go through the background checks our Chicago Police go through. I think this had something to do with the consultants the Chicago Police hired; it could be a retired copper. When many people retire with a large pension from Chicago, they forget where they come from. I hope Mayor Daley finds out why some of the armed guards must wait until December 31, 2008 to get their $230.00 check for putting their life on the line with no benefits. I hope Barack Obama makes sure these scabs are paid for putting their life on the line for him! Contact me for details, I know the companies involved. The workers need change! Patrick McDonough.