October 30, 2009 was a long day in the studio for City of Chicago employees. The star of the show was Orland Cobb, a Union 726 Teamster and Saul Charak, a local 150 engineer. Many people need to realize, the City of Chicago Department of Water Management needs to ensure its American’s with Disabilities protocol is enforced. Many City of Chicago employees want to work in dignity with fair and reasonable accommodation. Saul also discussed his working environment when he was at the Water Department. Enjoy our video that was taped at the CAN-TV studio in Chicago. Pease find out more about your right to work when you get injured, click here http://www.ada.gov/ Host of the show was Patrick McDonough pictured in the middle. Photo by Michael McGann and edited by Patrick McDonough

October 27, 2009, Chicago, llinois. Today was a long day again to document the corruption by American Bankers against the American people in Chicago. I have said this day would come for years, people were spending money like tomorrow would never show up. Americans are getting scam fees and high interest on things they purchased. Some people did not care because they would take another loan, pay their credit card balances, and then start spending again. The proliferation of gambling and bad habits is coming to roost. The banking system is the check and balance to save us from ourselves. The banking system decided to cash in and allow people to have access to money they could not pay back. The bankers were bailed out, they are profiting again, and Americans are tossed out of their homes. There is a crisis in America, no jobs, no money, and no future. This is a major issue and many people are suffering. Many of the factory jobs are gone, they will not return. Americans like the easy money, the politicians are corrupt, and China might take over as the new world leader. Chicago is in the center of the upheaval because it is so corrupt; the cancer spreads to the entire nation. Obama will not put Mayor Daley in check, and we will have a thousand plagues. I am asking every single American to take a very serious second look before you cast a vote again, watch your polling stations, demand better Government. Mayor Daley is selling every asset he can get away with, stop this now. Government has a special purpose, to protect us from ourselves.
There are some politicians that might make a difference maybe wake us up and send us back in the direction we need. The Chicago Unions need to get back to basics and remember to protect the workers, to apply pressure strong and steady, enforce the rule of law. The judges that pay a dollar per signature are part of the problem. We need to take the politics out of the judicial system. Please enjoy these pictures of the protest in Chicago, the people are hungry and want answers, not temporary solutions. It is both parties responsible for making the bad decisions.
I was happy to see David Hoffman supporters at the rally; I wish David Hoffman could have put a word or two to the crowd. I am happy to see people like David Hoffman run for U.S. Senate, and step forward when the country needs to change direction. We have a complex TV show that might put you to sleep, but it will explain what happened to us in the last few years. America needs to realize we need elbow grease and dirty fingernails to fix our mess. Photos by Patrick McDonough. God bless all the people that care enough about our country to protest. 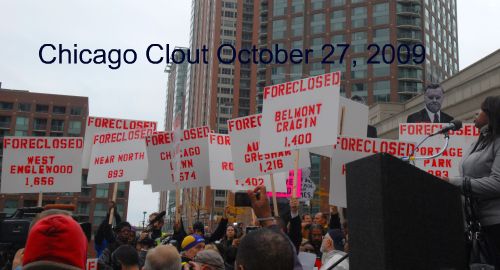 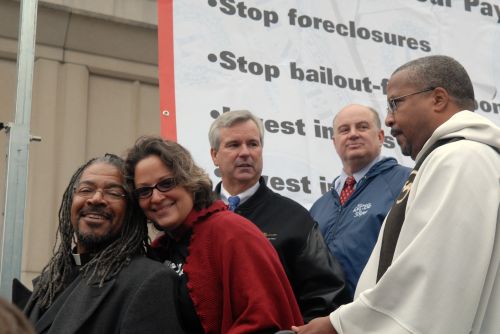 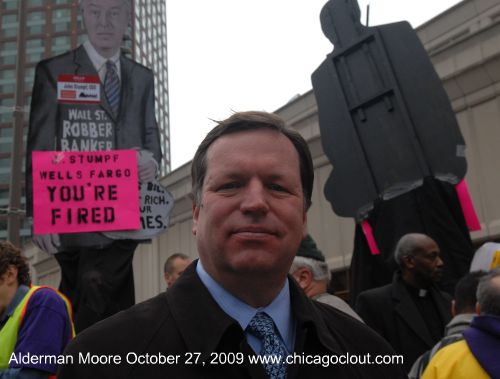 Pressure washing systems have been on Chicago Clout’s radar for a very long time. They have washed backhoes and trucks at the City of Chicago Department of Water Management for years. It is no secret they have been reported to the Chicago Office of the Inspector General for flagrant violations. I cannot list them right now. When I approached this company, the workers could not speak English. I contacted the union that covers this bargaining agreement, they did nothing. For years they have washed Chicago’s City Hall sidewalks. The same contractors tied to Blago are tied to Mayor Daley. Do you find it funny how they only talk about certain connections and not others? The City of Chicago is corrupt beyond repair; I just wonder why nothing is done. Chicago Clout is years ahead of the corruption curve, and we will always stay ahead of the top stories. We have more on this company that needs to come out soon, let’s see if the new leadership at the Chicago Office of the Investor General follows through. This picture was taken at the Department of Management yard in Chicago, this company came onto government property with no identification check, they rolled right in. Patrick McDonough. ]]> END_OF_DOCUMENT_TOKEN_TO_BE_REPLACED