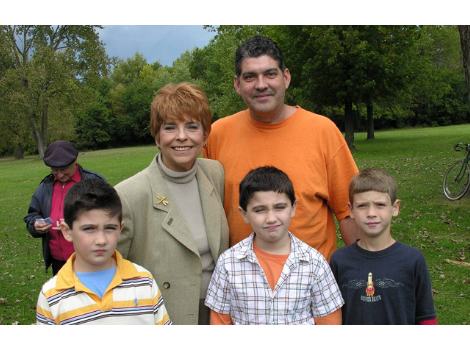 Many of Chicago City Workers bust their butts every day and give a honest days work for a honest days pay. The state of affairs in Chicago has hit a point where Chicago City Workers need good honest managers of Illinois to make sure the mistakes of Mayor Daley and his lackey Rod Blagojevich is put in check. Rod was sold as the reformer and his bunch cleaned our state out. The birthday gift of $1500.00 to his daughter is not a reflection of democrat values. Rod lies and shows no respect to his father-in-law. Rod is a George Ryan Democrat, I suggest to all Chicago City Workers to vote for the lady that put Whistle-blower laws on the books in Illinois, to vote for my first ever GOP choice, Judy Baar Topinka as next Governor of Illinois. I hope she uses her clout to fix the mess. Patrick McDonough. 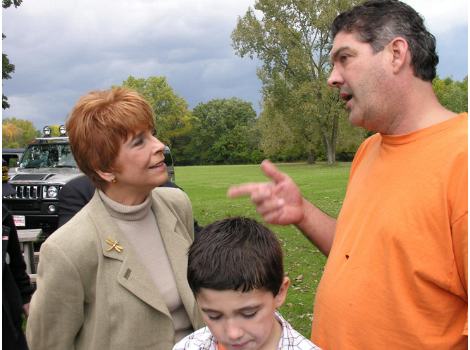 I gave all hell and back in a private conversation with Judy Baar Topinka regarding my position on many Union and Plumbers Local 130 issues and Chicago City Workers Issues. As we all know Patrick McDonough is not afraid to mix it up with any person that wishes to run for office, Democrat or Republican. After speaking with Judy Baar Topinka, and being the most pro union anti-scab, hard core, catholic, I will support for honest government…. see next posting.. ahhhhh I support for next Governor of Illinois…… Photo by Illinois staff photographer….. 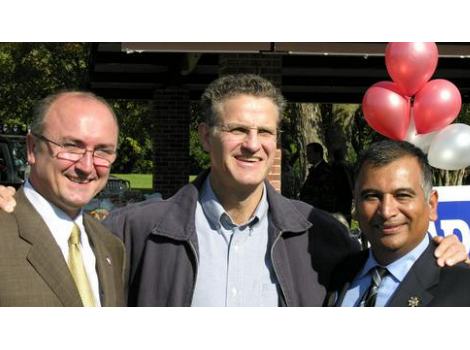 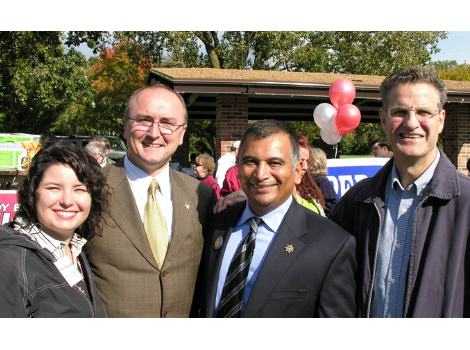 Today the sun showed it’s pretty face after a cold, windy spell. I was happy to take a picture of from left Ann Melichar, U.S. House of Representatives, Forth District Illinois http://melichar4congress.com/ My personal friend and rock star Tony Peraica http://www.votetony06.com Peter Garza and Joe Birkett. There is top Illinois political clout in this picture. The GOP of Illinois are making a great case for political victory. Photo by Patrick McDonough. 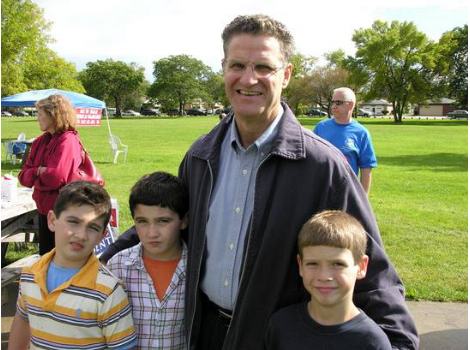 I was impressed with Joe Birkett’s speech today at the Labagh Woods. After a cold breeze and driving rain, the clouds broke through and Joe Birkett showed up with the sunshine. Joe gave a speech that actually made me ask him to restate just what he said. He said, ” We want no more Clout and Corruption, we want character and conviction”. Two thumbs up on that speech, very powerful and the message got through. Joe might just be the correct person for this office, Illinois Government is a wreck. Click this for the Illinois GOP website http://www.ilgop.org Patrick, David, and Michael McDonough are pictured with Mr. Joe Birkett. Photo by Patrick McDonough. 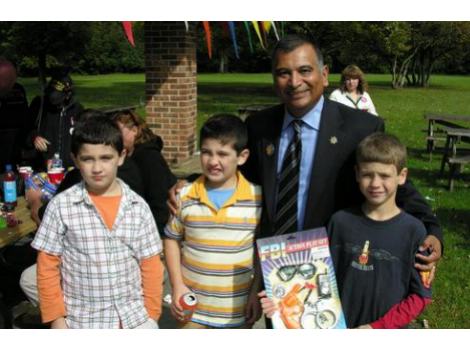 Today I enjoyed a speech by Peter Garza in which he explained you need a $10,000.00 bribe to be promoted in Cook County Government. Frank Avila was at a slating and spoke about the need for a Hispanic in the office. A Daley lackey was slated with big 11th Ward political Clout. Peter Garza is a great speaker and we need lots of debates to make the right choice for Cook County Sheriff. Peter Garza told me he is a fan of Chicago Clout.com Well with all due respect that gets big points with me. Mr. Garza’s wife is Brenda and she is a perfect candidate’s mate. For more information click http://www.garzaforsheriff.com Mr. Garza is a real Law Enforcement Professional. Photo with Patrick, David, and Michael McDonough. Photo by Patrick McDonough. 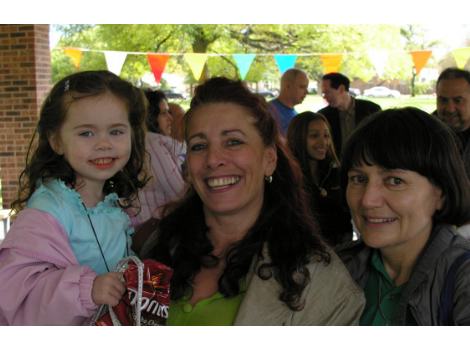 I enjoyed speaking with (from left) Grace, Rose, and Miriam. They are fighting toward “Justice for our Children”. Many people do not understand just how difficult it is to get your family out of the Cook County Court System when accusations are made regarding your handling of your children. I am for the defense of our children at all costs, but when you are in this system, it will be a long time before you get out. It is scary. You could make a mistake of judgement and find yourself bankrupt trying to get your kids back from the State. To understand more on this issue go to a rally October 5, 2006 10:00 a.m. – 2:00 p.m. James Thompson Center, 100 West Randolph Chicago to learn more. or go to http://www.illinoisfamilycourtadvocates.org While you are at this rally, tell the Daley Administration you are not happy with all the Clout and Corruption. Photo by Patrick McDonough. 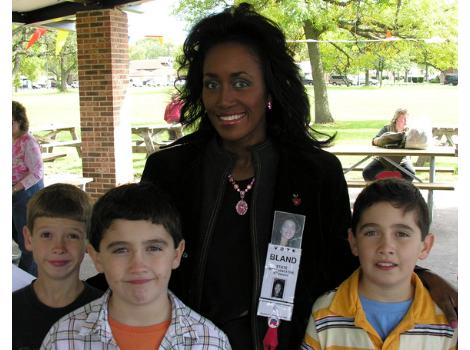 As we all know, I pride myself in my professional approach to political candidates, it is only fair. I will have an exception. Jane Myra Bland is a stone cold fox. Wow! Back to work… Please see this outstanding candidate’s website at http://www.myrabland.zoomshare.com or you can E-mail her at [email protected] This lady is an excellent speaker, well educated, and a high achiever. Her office is at 27 North Wacker Drive #116 Chicago, Illinois 60606 Photo of Patrick, David, and Michael McDonough by Patrick McDonough. 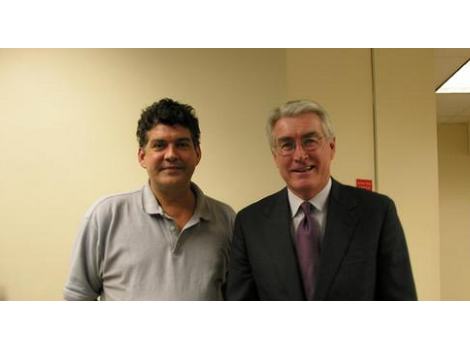 On September 28, 2006, at Tom Roeser’s class, I had the honor of having an enjoyable discussion with former Governor Jim Edgar. Jim Edgar was the Illinois Governor from 1990 to 1998. Jim served with honor in Illinois and compared to the current bunch of crooks like Mayor Daley, George Ryan, and Rod Blagojevich, Jim might become the next Roman Catholic Saint. Jim made a great appearance and spoke intelligently. What a change of pace. I did not agree with all the views of this famous Republican, but I respect him. the Republican party wanted him to run for Governor again, but he made a personal decision not to. With the FEDS crawling all over Illinois and Chicago Government, I think he made the right choice. Photo by Tony Joyce with my camera. Patrick McDonough. 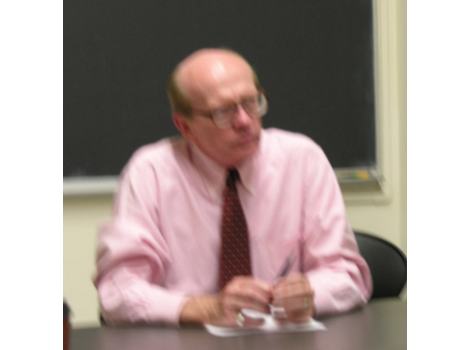 September 28, 2006 at Tom Roeser’s class. Dan Miller is a business columnist for the Chicago Sun-Times. This picture of Dan is blurred as I have never found a speaker that had so much knowledge to impart, and was determined to get it out in record speed. Dan Miller was jumping around so fast I was very uncomfortable. Dan was also with the Illinois Commerce Commission and Crain’s Chicago Business. I enjoyed many of the things Dan had to say, but I disagreed on many points of view he had. Mayor Daley and his Administration’s Clout and Corruption Tax is a tax many Chicago businesses accept as a cost of doing business in Chicago. Dan had many conflicting points of view and will see one issue one way, than another issue another. My head was spinning after he was done and I did not get to enjoy a point counter point. Aspirin please. Photo by Patrick McDonough.