September 27, 2006: I must complement the Chicago Department of Human Resources and the Chicago Department of Water Management for handing out literature that attempts to more clearly explain the policy on Sexual Harassment today. I must say that is a step in the right direction as this policy might not have been enforced based on an actual assault but based on a graduated discipline depending on your clout. I hope Chicago Management gets out of the Caveman mentality and starts to enforce policy across the board, clout not withstanding. Many people have put their job on the line in the past, reporting acts that would disgust any parents expectation of a job-site for his daughter. I expect every Chicago City Employee that signs the Acknowledgment form to remember, treat each other with respect. You are not funny when you talk like a slob to the opposite sex. Patrick McDonough. 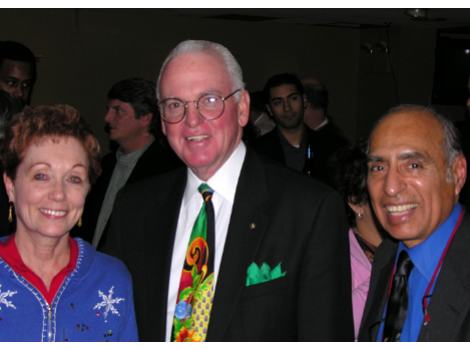 Sherry Avila, Alderman Burke, and Commissioner Avila, enjoy a laugh. However, Chicago’s former City Clerk is on his way to prison for his involvement in the “Hired Truck Scandal”. Daley has been dangling the carrot in front of Hispanic Chicago Alderman which allowed an unwanted veto of “Big Box”. Some Alderman have been duped by greed and got a double whammy as Daley wants one of his “Boyz” as Chicago City Clerk. The inside players are making a move to push Commissioner Avila to run for Chicago City Clerk, as he is clean as a whistle, no corruption, no dirty laundry. I agree, that’s the smart move for the taxpayers. Daley has the Feds breathing down his back so he wants a lackey like Cerda to keep “Business a usual” in-case Daley spends a long vacation at “Sing Sing”. Lets hope Frank Avila Sr. puts his hat in the ring for clean honest Government, we need it now. Photo by Patrick McDonough.

One of the things that impresses me most about the Soviet Union is after misery and suffering, they got smart and decided to have a democracy. Chicago citizens after years of dictatorship and strong arm tactics, are starting to cry out for freedom. Vi Daley has a very able challenger by the name of Peter Zelchenko, zelchenko.com and ward43blogspot.com his number is (312) 733-2473. Peter is very intelligent and very concerned about bettering the lives of chicagoans. Peter is a powerful political writer with a pedigree. Vi needs to be removed from office, and some fresh blood needs to serve Chicago City Hall. Please give Peter your support. Rumors are in the works for an even better candidate, Rachel Goodstein. Rachael Goodstein is the President of Meigs Action Coalition. Until this rumor pans out, I suggest you vote for Peter Zelchenko. Let freedom ring Chicago!!! Photo by Patrick McDonough.

Download file
Please enjoy a copy of my Certificate of Completion on Ethics Training. Today I went through a grueling examination to prepare me for every nuance of Ethics. I am happy to report the City of Chicago and the Department of Water Management provided a professionally produced computer program that walked you through the process. The program walked you through 5 important areas of ethics, conflict Law Personnel Rule XX, outside employment, Gifts, employment of relatives or domestic partners, political activity, and post employment restrictions. Whew! Some areas such as post employment are grey as expected. However, this is much needed progress to make Chicago employees more professional. As you would expect, I got every question correct the first time. I hope everyone takes full advantage of this step in the right direction.. Patrick McDonough.

I think we all know Commissioner Frank Avila is a very well respected leader at the Metropolitan Water Reclamation District of Greater Chicago. Mr. Avila is pictured with Patrice McDonough a slated candidate for political office. Also pictured is Michael J. Gadzinski, Committeeman for the Norwood Park Township serving Park Ridge and out lying areas. Commissioner Avila is a very well educated man and a former member of Plumber’s Local 130. Did you know Mr. Avila has a son that is one of the best lawyers in Chicago?

Please enjoy this picture of the McDonough Boys with Master Dong Jin Kim, a 8th Degree Grand Master Instructor. Also in the photo is Instructor Rosemary. This Martial Arts Academy is located at 682 Roosevelt Road Glen Ellyn, Illinois 60137, Phone is (630) 790-0097. If your children have behavioral problems, do not drug them up, this school has a track record for teaching self-defense, confidence, respect, and self-discipline. Sounds like some Chicago politicians should attend some classes…eh? contact them at www.usmage.com Photo by Patrick McDonough

Please read an article by Janet Rausa Fuller in the Sunday September 24, 2006 Chicago Sun-Times. The link is here: http://www.suntimes.com/output/news/cst-nws-bribe24.html I guess the Inspector General is still chasing after another small fry. Bribery is widespread in Mayor Daley’s Administration and this might be par for the course. I hope that Tony Carter uses his head and calls the money a Christmas gift or a Birthday Gift. Just remember Chicago City Workers, if your stupid enough to take money, steal large amounts, it will help you move up the ladder. You know the saying F-up, Move up. Also remember, Tony Carter is innocent until proven guilty.

The Chicago Inspector General showed up at the Chicago Commission on Animal Care and Control. A dog was put to sleep by accident and Chicago City Workers involved misplaced the records. One person that witnessed the event said,” A whole bunch of plump guys and gals, huffing and puffing after the fifty foot walk from the curb stormed the joint”. Most investigators were “pissed off” and told my informant,” F-this shit, we usually just sit in cars all day spying on residency violations”, and “Man this is work!”. One other witness told me, “They went over the top, guns were drawn, they all had “Men in Black” uniforms. I saw one hillbilly tease the I.G. and call them “bunch of wanna be coppers”, the hillbilly walked off after the rude comment and the I.G. could not catch up with him. Chicago Inspector General David Hoffman had nothing to say on this mess. The conditions of the Dog Pound is a mess, said several people. The dogs would eat their own feces, as the food was missing. Please see Fran Spielman’s account of events in the Chicago Sun-Times, Saturday September 23, 2006. I think the I.G. should be disbanded and real police and investigators should investigate crimes. Story by Big Al.

Alderman Bernie Stone is long time Chicago Alderman, and as a result has got clout. Prior to meeting Bernie Stone, I was not impressed with his views regarding Mayor Daley. I do not think Bernie comprehends the power Daley took away from Chicago Alderman. Alderman have too little power to interfere on behalf of a city worker. Bernie and I agree on this. Also although Bernie is against “Big Box”, I was happy to see him drinking “Kirkland Brand” bottled water. Kirkland is a Costco brand name. Costco is more worker friendly than Walmart or Target. Costco pays a fair wage and is pro-union. During the class Tom Roeser and I had a good verbal assault with Bernie, Tom gave me a great lead-in shot with his “Hired Truck Scandal” question, but I did not bite, sorry Tom. My main impression with Bernie is he just want to get along with Daley and after 30 years as Alderman he is just tired. But, Bernie is as sharp as a whip, I just do not agree with his views on many issues such as TIF’s and Daley’s performance as mayor. I think term limits are needed in Chicago because we need fresh blood in Chicago Council. Photo by Patrick McDonough with Tony Joyce’s camera.

September 21, 2006. The second half of the Tom Roeser classes at Roosevelt College in Chicago was excellent. Cynthia of the Illinois Campaign of Political Reform was the speaker. http://www.ilcampaign.org/ Cynthia was very informative and was very interactive with many of the class members. Many of the class members are high profile political players, so the back and forth was great. Cynthia is a wonderful person that challenges the “Status Quo”. I enjoyed the exchange. Photo by Patrick McDonough with Tony Joyce’s camera.