The rats over at Plumber’s Local 130 continue to work with the Office of the Inspector General allowing ditch digger John D’Amico to not show up for work at the City of Chicago. Chicago fires employees that do not show up for work, it is called ghost payrolling. The criminals at the Department of Water Management continue to look the other way as John D’Amico is a no-show at work. Instead, this creep is trying to legalize marijuana in Illinois. When I worked on his crew he was not on the site because he was doing side jobs with his family members and installing fences near his house using taxpayer’s water main pipe. Many people are out of work and would like to get a free plumber’s license like John D’Amico. Many people would like a 100,000.00 per year no show job at the water department. Instead John D’Amico is downstate voting to allow folks to smoke pot all day. Along with the pot smoking, is free rent, free food, and free money. Most companies have drug testing. Most of the taxpayers are not aware John is making a fortune in the pension retirement game. It is all covered by Michael Madigan, his sugar daddy, and Mayor Daley. If this is leadership in Illinois, we all might want to smoke some pot before the ship sinks. Where in the hell is the Chicago Office of the Inspector General? Out smoking a blunt? Get ready for some mighty big taxes dudecycles.

Rahm Emanuel Objection.pdf Please feel free to use at no charge. If you are a former City of Chicago employee fired for residency, enjoy! 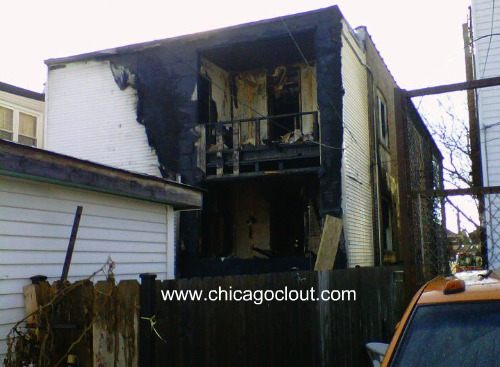 Many people are not aware the City of Chicago, Department of Water Management responds to fires. Lately, the Department sends the Investigator crews. In the old days, the hydrant truck would respond. The Hydrant Truck will soon be working around the clock, seven days a week. If you have clout, this overtime is given to the same caulkers seven days a week. All members of this union pay very high dues. This overtime is not rotated because Plumber’s Local 130 does not represent its members. The same guys that get this plush overtime also take overtime year round. James Sullivan at the Plumber’s Local 130 should stop playing around with the politicians and take care of his members. What suggestions do you have to get the water department response truck to the site sooner? If we have no water at the site, more people will die. Photo by Patrick McDonough

Looks like Jay Levine of CBS2 shook Jan Schakowsky out of her hidden addenda to support Rahm Emanuel for Mayor of Chicago. It took objections filed by Patrick McDonough and Election Attorney Burt Odelson today. Maybe Jan Schakowsky is really concerned because the North-side Democrats already made the deal to support Rahm. It is no secret the wards that violated the Shakman Decree, used political muscle, corruption, and criminal activities had the deal signed long ago. Most of these ward goons never admit who they support because they cover their bases and are cowards. In a video at the Chicago Columbus Day Parade, Chicago Department of Water Management no-show employee and double dipper, John D’Amico was following Rahm Emanuel around like a lost puppy until the TV cameras showed up. The State Representative and part of the Laurino clan knows the deal was set a long time ago. If you think about it, Jan has no business worrying about the Chicago Mayoral race at all. She is just covering her rear-end when Daley steps down and all the hiring and contract fraud is exposed. Rahm will allow the statute of limitations to expire. Just remember this Chicago Voters; Rahm Emanuel is at a big shot basketball game in California texting to all his friends in the Chicago media business. The rest of the Chicago Mayoral hopefuls were serving Chicago homeless a thanksgiving meal. Rahm is not a resident of the City of Chicago. I also made a formal complaint to the Chicago Office of the Inspector General a few days ago about Rahm. Chicago city workers were fired despite the fact they lived in Chicago in residency claims they could not afford to appeal. We demand the Office of the Inspector General make a ruling as to the law regarding Rahm’s residency. Enough city workers have been fired for less, you cannot have it both ways Jan and the OIG. I will have more on the Rahm inside deals soon, not now. Photo by Patrick McDonough 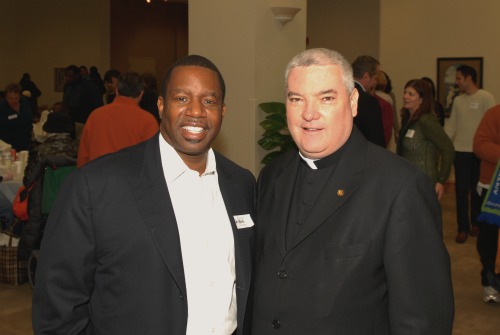 I know it sounds corny from a Chicago Roman Catholic taking a sabbatical, but it did feel great to go back to my roots. I enjoyed my conversation with Reverend Monsignor Michael M. Boland at the Thanksgiving meal for Chicago’s homeless. Rev. Boland is the Administrator, President, and CEO of The Catholic Charities. I am happy to report Rev. Boland agreed to appear on Chicago Clout as a guest. I was going to talk about the political results of the Chicago Catholic Church since Richard Daley became mayor. I do not think Daley has done enough positive, in words or actions, to promote or recognize the important work the Catholic Church. I hope the next Mayor of Chicago understands the importance of all religions and shows thanks for the good deeds. Daley decided to get into the religious business with his “Mayor Daley Meals on Wheels” self-promotions with taxpayer money. I enjoyed this Thanksgiving with this man of faith; Rev. Boland inspired me to get closer to my upbringing. Enjoy this picture of Illinois State Senator James T. Meeks and Reverend Monsignor Michael Boland taken November 25, 2010. Photo by Patrick McDonough

Please enjoy this picture of Senator James Meeks and Gery Chico at the Catholic Charities Thanksgiving 2010 at 721 North LaSalle. Both of these men served the homeless and are also running for Mayor of Chicago. I do not recall Mayor Richard Daley ever humbling himself to serve anyone else besides himself, his family, and friends. One of these two men would make a much better Mayor of Chicago. Both of these men had very civil conversations and Senator James Meeks had a wonderful conversation with Sunny Chico. Both of these candidates agreed to appear on the Chicago Clout T.V. show during this election cycle. A great leader should humble himself to fully understand the plight of the needy, times are not looking very bright in Chicago due to economic hardship. I am just happy to see these men working together for the common good during this Thanksgiving season. God Bless. Photo by Patrick McDonough

I was happy to see some 2010 mayoral candidates at The Catholic Charities Thanksgiving event at 721 North LaSalle Street in Chicago yesterday. November 25, 2010 was a happy time for many of Chicago’s homeless living in the mean streets of Chicago. My entire family enjoyed helping in the spirit of giving. I was very proud of my children and their unselfishness. It really made me feel so much better to be part of this event. Many people are out on the streets due to foreclosures and the reduction of public giving. I think Father Wayne Watts, one of Chicago’s own and a reverend at Saint John Berchmans in Logan Square should be honored for all he did at the event. His enthusiasm was evident the entire time. I also had a chat with Wallace “Gator” Bradley and the Reverend James Meeks. James Meeks is running for Mayor of Chicago. Photo by Patrick McDonough