In addition to Chicago Sun-Times report. In major fires, the City of Chicago Department of Water Management provided needed suport. Two Investigator crews responded today, including Patrick McDonough, Ronald Bober, and Al Treadwell. Job well done!
55 displaced in extra-alarm Rogers Park blaze
November 7, 2010
SUN-TIMES MEDIA WIRE
Fifty-five people — including 21 children– were displaced after an extra-alarm fire in a Rogers Park apartment building Sunday afternoon.
The Red Cross will open a shelter to provide a safe place for the the 34 adults and 21 children who were displaced, according to a release from the American Red Cross of Greater Chicago. The organization will also provide assistance for food, clothing, seasonal garments and mental health services.
The fire was reported at 6655 N. Newgard Ave. in a three-story, 12-unit apartment building at 12:47 p.m., according to Fire Media Affairs spokesman Rich Rosado. The response was raised to a 2-11 alarm at 12:59 p.m., Rosado said.
The fire was out at 1:50 p.m. but firefighters on the scene were chasing hotspots, Rosado said. No one was injured and no one needed to be taken to a hospital to be checked out, Rosado said.
The fire was on the second and third floors of the building, Rosado said. The building was partially vacant.
A 2-11 alarm sends at least eight engines, four trucks, two tower ladders, five battalion chiefs, a district chief, a deputy district chief, a squad company, an ambulance and the Command Van to the scene.
Please note, one lady and her daughter provided firefighters, water department investigators, and the homeless folks with sandwiches, paid for out of her own money. This lady that also lives close to the fire, allowed the affected families to use her bathrooms and home. I with they would do a story on her good deeds. We should also thank the Salvation Army and other city agencies for additional support. Photo by Patrick McDonough.

<![CDATA[<img alt="Gary Amish Chicago Plumbing Inspector" width="200" height="199" style="float: left; margin: 0 20px 20px 0;" data-src="https://www.chicagoclout.com/Gary%20Amish%20final.jpg" class="mt-image-left lazyload" src="data:image/gif;base64,R0lGODlhAQABAAAAACH5BAEKAAEALAAAAAABAAEAAAICTAEAOw==" /> Mario Olivella is a member of Plumber’s Local 130. The Plumber’s Union is run by James Sullivan. It is no secret, politician go to see James Sullivan for money when it is time to get reelected. I need to figure out how James Sullivan can give all that much money legally. Of course, when you control the judges in Chicagoland, you can bend the law to make things happen. Many times, the Plumber’s Union hall is used for fund raising, and I hope the union members are reimbursed for the use. When you control the local judges, and they know you control their livelihood, you know you never cross the Plumber’s union. For twenty years, Local 130 and Mayor Daley shared the same bed, resulting in massive power for Daley. The membership of Plumber’s Local 130 have watched the union become the laughing stock of the industry. Member after member sits at home, praying for a side job to keep the heat and lights on. James Sullivan took another job in the United Association, stockpiling pension after pension. Many people have their jobs with the City of Chicago need to thank and continue to thank the Plumber’s Union. Despite the ban on Shakman Laws, the same steel grip continues, leaving the City of Chicago to have incompetent supervision. Many more Plumbing Inspectors remain that need time in jail. Chicago Taxpayers got stuck buying homes and condos with no Plumbing Inspection. How the hell can you inspect anything if you cannot walk? The “Inspection” consisted of a drive by and an envelope exchanged for a signature. Look at all the “suckers” breathing sewer gas from open drains. Look at all the envelopes exchanged for not installing a water service, leaving the old lead for the new homeowners to drink. Is the City of Chicago going to re-inspect these homes? No! Is the City of Chicago still hiring and promoting “Plumbers” that received licenses illegally? Yes. Did the politician’s friends that know nothing about Plumbing receiving illegal licenses for their phony minority companies? Yes. Is the Chicago Office of the Inspector General doing anything? No. Is the F.B.I. doing anything? No. Is Patrick Fitzgerald taking interviews and following up on complaints? No. They just busted a bunch of tokens and let the sharks continue business as usual. They also allowed Mario on the City Payroll after he was busted. Despite numerous complaints by members of the Municipal Advocate General, the shut up money continued, months on end. Also in the news, Martin Munoz, a clout heavy hoisting engineer busted by Fran Spielman for clubbing another city worker in front of witnesses, at 39th and Ashland, did not have an easy landing when a guy ran him over on Election Day this week. I will watch in case he files a workman’s compensation claim, will you? Yes sir, the tumor heads at the Water Department let him off the hook, over stepping an I. G. investigation. What comes around goes around. I hope the guy that ran Martin over calls Senator Munoz and asks for the investigation to be squashed. Martin took a day off from work to act the clout role and paid the price. The taxes are going to explode next year to make sure these guys get a nice big fat pension. How is a second job looking about now? Enjoy your weekend, Patrick McDonough.]]> END_OF_DOCUMENT_TOKEN_TO_BE_REPLACED 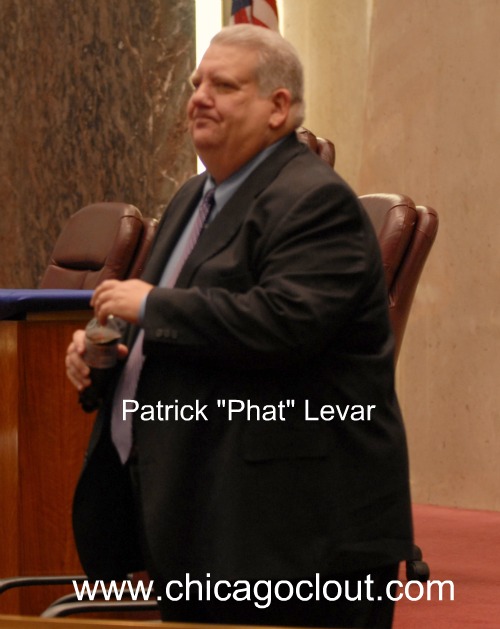 On October 29, 2010. Bernie Stone was sleeping while billions of dollars were switching hands. The 50Th ward voters were never accused of being too bright anyway. Photo by Patrick McDonough.

On Friday October 29, 2010. Thomas Powers P.E., the current Commissioner of the Department of Water Management was grilled by the Chicago Council. Several Aldermen went above the call of duty and were prepared with great questions. I admire Alderman Ed Smith for being prepared and well informed. I noticed John Spatz did an excellent job supporting the new Commissioner. Photo by Patrick McDonough