Many well connected Plumbing Inspectors are scared for their lives at the City of Chicago Jardine Plant. What looks like a well placed shotgun blast terminated the rear window of Carl Jackson, Chicago Plumbing Inspector in Charge. Rumors have it; Carl Jackson is sitting on many checks that are part of well placed scam involving top City of Chicago Department of Water Management and Building Department employees. In its simplest form, the scam works like this, a Plumbing Contractor places a check made to the City of Chicago. The money should be used for water main work and meters. The department holds the check and have the repairs made by employees in distribution under the guise of street leaks or cut-offs, ect. Than the money is split with the contractor that brings the cash bribe and exchanges the money for the check. This scam might backfire if someone holds the check too long or reneges on the deal. I really hope the Plumber’s Union can protect Carl Jackson if someone is out to get him. I also think the F.B.I. should investigate if threats are made to Water Department employees as the Jardine Plant provides drinking water to millions of people. I am not saying Carl has any part of this illegal activity, but I suggest he gets any backlog of work up to snuff. A checks should be deposited the same day they show at the city. I do not like when possible terrorist attacks are made against City employees. If you know of any possible scams, make sure you call the Office of the Inspector General. I am witness to a contractor in court under oath making these accusations. On another note, that was a nice gag Rahm played on Chicagoans. What a fool Rahm is.

Russ Stewart writes. “JUDGEMAKER’S”
ANALYSIS & OPINION BY RUSS STEWART
Every lawyer dreams of being a judge. The robes, prestige, power and pension: It’s the profession’s pinnacle.
In Cook County, there are 40,000 attorneys. And there are 445 judges, of which three sit on the Illinois Supreme Court, 24 on the Appellate Court, and 418 on the Circuit Court. That means one of every 90 lawyers is on the bench.
The qualifications are not onerous: Have a pulse. Be a registered voter and licensed attorney. In theory, any undead lawyer can be a judge, and earn $169,555 annually.
But, in reality, most would-be judges are utterly clueless about the process: Start early, a year prior to the February primary. Get 500-plus signatures on multiple nominating petitions. Run as a Democrat. Get “qualified” ratings from bar associations. Get endorsed by unions and newspapers. Get slated by the Democratic party. Have an Irish surname. Be a woman with an Irish surname. Don’t have a weird surname. Attend political functions and get warm-and-fuzzy with Democratic committeemen. Spend $50,000 for ads and political donations. Win the primary.
And, most importantly, hire Mike Tierney: The Judgemaker.
While obscure to the public, Tierney, who works as a city plumber, has developed his own cottage industry. In the past eleven election cycles, since 1990, Tierney has handled the campaigns of 45 judicial aspirants, and 40 have been nominated in the Democratic primary, and thereafter elected. That’s an astounding 89 percent success rate. Among judges, Tierney’s reputation is legendary.
Tierney’s secret: Institutional knowledge. He knows the process. He knows the players. Lawyers don’t. “They’re busy people,” said Tierney of his clients. “My job is to initiate them. Mentor them. Direct them. And accompany them to key functions.” Already, Tierney is besieged with potential clients for 2012.
Here’s the Tierney Method…. Go read the rest by Russ Stewart at the Nadig Newspapers. 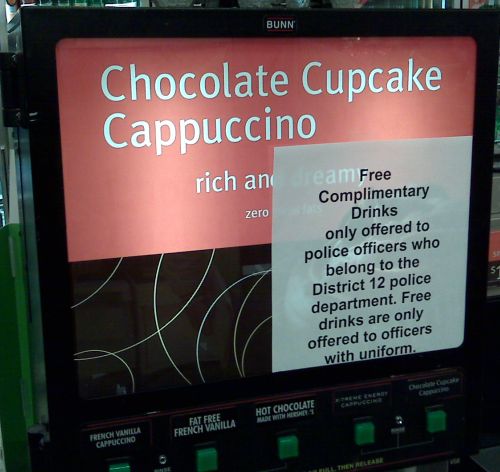 I am a great fan of the Chicago Police Department. Most cops are fine neighbors and upstanding Amigos. Many of the cops Daley promoted are pretty lousy and do not provide good leadership. The Daley family expects the public to pick up their tab everywhere they eat and drink. People brought up in the 11TH Ward and Chicago’s Bridgeport communities were brought up that way. Most of the cops I know pay for everything out of their own pocket. This store is in the 400 block of South Green Street. Regular customers like you and I have to make up the difference in the cost of the free coffee and snacks these cops scam. I always see a large group of Chicago Cops and detectives stealing coffee there. I put my life on the line every day at work, but I do not take free coffee and snacks. Photo by Patrick McDonough