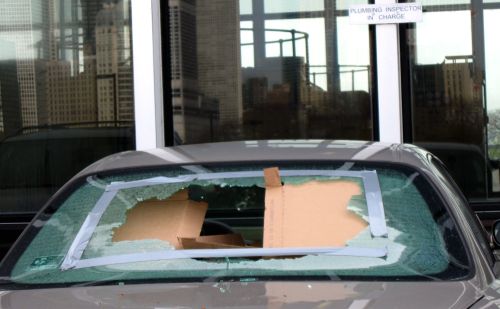 Many well connected Plumbing Inspectors are scared for their lives at the City of Chicago Jardine Plant. What looks like a well placed shotgun blast terminated the rear window of Carl Jackson, Chicago Plumbing Inspector in Charge. Rumors have it; Carl Jackson is sitting on many checks that are part of well placed scam involving top City of Chicago Department of Water Management and Building Department employees. In its simplest form, the scam works like this, a Plumbing Contractor places a check made to the City of Chicago. The money should be used for water main work and meters. The department holds the check and have the repairs made by employees in distribution under the guise of street leaks or cut-offs, ect. Than the money is split with the contractor that brings the cash bribe and exchanges the money for the check. This scam might backfire if someone holds the check too long or reneges on the deal. I really hope the Plumber’s Union can protect Carl Jackson if someone is out to get him. I also think the F.B.I. should investigate if threats are made to Water Department employees as the Jardine Plant provides drinking water to millions of people. I am not saying Carl has any part of this illegal activity, but I suggest he gets any backlog of work up to snuff. A checks should be deposited the same day they show at the city. I do not like when possible terrorist attacks are made against City employees. If you know of any possible scams, make sure you call the Office of the Inspector General. I am witness to a contractor in court under oath making these accusations. On another note, that was a nice gag Rahm played on Chicagoans. What a fool Rahm is.

4 Replies to “Was an assassination attempt made on Chicago Plumbing Inspector-in-Charge Carl Jackson?”