On March 29, 2006 the Chicago Department of Water Management Valve Crew worked in the middle of the 45th Street and State Avenue intersection. The workers were John Hickey, Paul Montes, and the greatest plumber in the City of Chicago, Patrick McDonough. ” I was in the middle of the intersection and the crew placed safety cones everywhere”, said McDonough, “I try to work safe.” The speed limit is 25 mph and the cars and trucks were speeding by at 50 mph or more. Large semis and cement trucks were within 2 feet of the valve basin. At least the guys that works for the Illinois state highways and tollways have some form of safety. “One false step and my five kids would have no father,” said McDonough.
I cannot believe this, we need proper safety procedures.

Chicago Police had a driving skills test today at the Chicago White Sox’s Parking Lot “G”. The lot is located at 33rd Street and NormaI. I was amazed at how well the Chicago Police drive the course with out hitting the cones. The driving excellence is a reminder to goof balls that think they will out run the police. Young drivers remember, pull over and do not make thing worse on yourself. One police officer really stood out on the course, a great driver, her name is Officer Alvarado. I never saw more burn outs and smoke than today. The Water Department love our Police. 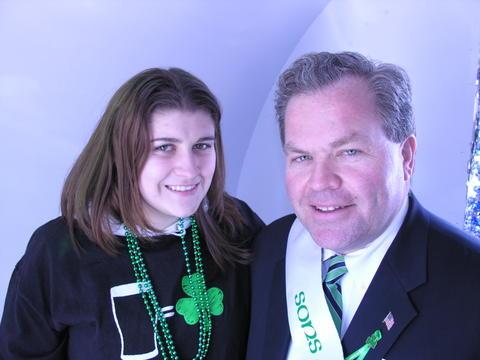 On March 28, 2006, I observed a bizarre and disconcerning event. At the Chicago Department of Water Management located at 39th and Iron a private contractor was loading up a truck load of Water Department supplies. I noticed this in the North District Water Department Wabansia yard at 3822 West Wabansia before. I know Water Department employees need I.D., drug tests and background tests to enter the site, but this guy had nothing and no Union credentials. Again, I am against contractors being supplied with any City property, material and/or labor. We must have complete separation and accountability. The contractor was Mannion Plumbing. The truck a beat up old white Ford 150 with license plate 12130 D. The driver told me he drops these parts off all over the city. I do know Mannion Plumbing is sent in to help Water Main Contractors that do not have Licenced Plumbers as required by law. Usually, when the contractor is busted by Chicago Plumbing Inspectors. On a personal note, when I was fired by the Department of Water Management on April 1, 2006, (Ha, Ha, April Fools Day), my lawyer Frank Avila was told he cannot enter the site due to Security Concerns (Frank Avila a Captian in the U.S. Army reserve). Mayor Daley’s Chicago Inspector General’s Office was given a call to determine policy, Investigator Amezaga answered at 9:45 a.m. and was not concerned. The I.G. was not concerned about Hired Truck calls in 1999, 2000, 2001, 2002, and or 2003. Very consistent.

Many years ago , I was in verbal disagreements with the way the overtime was distributed in the Chicago Department of Water Management. I talked to Michael Tierney and Tom Cook about why I did not get overtime. They asked me to leave the office and Michael Tierney slammed the door on me. I could not understand bribes were paid to Michael Tierney according to sworn testimony at Patrick McDonough’s residency hearing. I called the Chicago Plumber’s Union and they did nothing. Tierney married one of the daughters of the Business Agent, Tom McMannus, that had a duty and a obligation to protect it’s members. Please read an article by Gary Washburn for your entertainment. http://www.ipsn.org/local_1001/web_site_details_ot_paid_by_city.htm The department is currently on a list system for laborers and a settlement has been made to it’s members. Laborer’s Union under Charles v. Loverde, the President and Business Manager have good leadership as compared to Plumber’s Local 130 failing under James Sullivan. Keep Politics out of the Workplace!. A overtime list might be on the drawing board for the Plumbers. Wait and do not hold your breath. A Overtime Information Form has been requested by Management, changes coming? Will Teng and associates administer this list?

It was reported today, the City of Chicago Department of Water Management downed two additional Hydrant Trucks. Since I have been the Plumber-in-charge of the Night Hydrant Truck and have responded to fires, I think the game of Russian Roulette should end now. If a Fire Hydrant is out of order in Andersonville (48th Ward) and a high rise is burning, who will get the Fire Hydrants working? What if the one and only Hydrant Truck serving the entire city is on the Chicago South West side? Let us put a stop to this madness. Call your alderman and the Unions to see what they say. That is as crazy as shutting down the fire stations to save money. Patrick McDonough Candidate for 48th Ward Alderman.

In a typical phony contract game of hide and go seek, for millions per week, here we go again. I keep finding “Pitometer” work tickets that order city work crews out to make repairs. Most of these repairs are not needed. Many of the tickets are for valves that are in the closed position. The majority of the time, the valves are in the open position. “Pitometer making up work? Also City of Chicago crews are sent to valve basins that are wrote up as “Leaking”, the valve basins are “bone dry”, foreman have reported. I called the company at the Chicago address and the lady said they work out of Alsip, Illinois. Pitometer has some old contracts totaling over 1.5 million none currently valid per Chicago vendor sites. This company is really owned by Severn Trent a company based in the United Kingdom. No contract is listed as a vendor with Mayor Daley’s phony online vendor and contract system. Millions of dollars flow through the Chicago Dept. of Water Management unreported. Does Daley know these are foreign owned companies working on City of Chicago Water Mains with no Plumbing Inspectors to provide Public Safety? The last bombing was in the United Kingdom. If foreigner terrorists get into the Public Water Supply and poison us millions could die, more than any damage an airplane could do. I suggest a Union trained work force touch the water supply only ,and have a legal residence in Chicago. In last contract dealings, the Unions can now review contracts. (I know more that you think). Lets work for the Citizens of Chicagoland and not politicians shaking down contractors for political donations. Patrick McDonough, political candidate.

Please read http://www.suntimes.com/output/news/cst-nws-laura25.html It just go to show Laura Foxgrover Murphy did not get treated as other employees do during an accusation, did she get interviewed and fired by the Inspector General? Did her hearing take months on end when she had no income? I guess due process means for the chosen few. Hey lawyers, please note how she was treated as compared to other City of Chicago terminated employees. Back to court we go! On a personal note, what Laura Foxworthy Murphy did do is completely unethical and immoral.

Please enjoy this from Fran Spielman, the Chicago Sun-Times hardest working reporter.http://www.suntimes.com/output/news/cst-nws-asphalt26.html On an added note, the Department of Water Management wants to place GPS on the Chicago Hired Trucks, please tell me who is going to pay for this. Also please tell me why is thousands of Construction Projects Files are under 24 hour surveillance at 2322 South Ashland? Note to self, do not touch that paperwork, it is under F.B.I. lock-down. When the Feds unlock those files, maybe we can figure out where all the missing materials and labor disappeared to. Maybe Vulcan and the FA-6 mystery can be solved. Material Services?

Of all the members of Chicago’s Plumbers Local 130 membership and City of Chicago Department of Water Management employees contest for “Top Vote Getter in Illinois”, these are the final vote totals: Patrick “Deep Water” McDonough got a total of 10301 votes for State Central Committeeman, second place went to John C. D’Amico that received 2231 votes. John Daley, Mayor Daley’s brother only got 7267 votes. Patrick McDonough declared victory noting, “I never used Hired Truck money like John C. D’Amico and John Daley”. “Both these guys are double dipping and McDonough kicked them to the curb”, said Big Willie.