City of Chicago Hired Truck, Littleton Trucking, was followed by a gold Ford Taurus with licence plate TTS 862 (Michigan Plate no front plate). The Taurus also had a Chicago city sticker. The Taurus was seen spying on the hired truck from 36th street and Rockwell in Chicago at 8:15 a.m. The Chicago Police interviewed the Taurus driver, a white male, who confessed he is an investigator. The Taurus is licenced to his mommy in Michigan. Just remember this little piece of information, the investigator did not check to see if the driver was: licensed, union, paid prevailing wage, or/and if the truck had valid insurance. Might I add the tires on the semi needed more thread. Please post any suspicious cars you see spying on City Workers, so we can keep a list.

The City of Chicago, Department of Human Resources, Application Center, 121 North LaSalle Street, Room 100 Chicago, Illinois 60602 sent out the following notice: Dated March 2, 2006. Chicago has purged all employment applications that were received before January 1, 2005. Please make sure you reapply for open jobs. Also open position can be found at www.cityofchicago.org/careerworks. Make sure all you city workers remind your children to apply again. Patrick McDonough.

On April 1, 2005 (April Fool’s Day), Mr. Charles Thomas came to 39th and Iron, Chicago Department of Water Management) to get the story on why I was terminated. I will always remember what Mr. Charles Thomas said, “This is the City of Broad Shoulders, and during these tough times this city will carry you on those broad shoulders”. To this day, I will never forget what that man said to me when I hit the bottom. That was also the first day I met Frank Avila, that day Frank Avila was unreal. Charles Thomas Clout Rating: Mega-Clout with spiritual ring.
Please read http://abclocal.go.com/wls/story?section=News&id=2929938

On March 19, 2006, I had the honor of speaking with Michael Shakman, Edward W. Feldman. This was my second meeting with Michael Shakman. Again, I told a few more stories about the way Chicago does Hiring and Firing in Chicago. I went with Frank Avila, my Attorney. I got the impression Michael Shakman is sick about the way his Shakman Decree was a scrap piece of paper to the Corrupt Daley Administration. Mr. Shakman does not endorse candidates. I wish he endorsed Frank Avila and Patrick McDonough. Patrick McDonough.

On March 19, 2006, Frank Avila went downtown to speak his mind on the back door slating of Tom Dart. Frank got lots of press when he asked for a more balanced ticket. Tom Dart was Slated but I loved Alderman Dorthy Tillman putting up a fight. Some of the Chicago and County Committeeman act so self important, hey “Get Real”. Photo, Patrick McDonough. 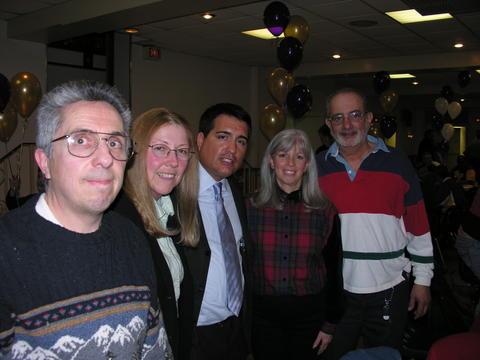 Many people in Park Ridge are becoming more Democratic than ever before. There seems to be more interest than when I grew up in Park Ridge. Please enjoy picture from left, Burt Cusentino, Terry Somen, “Top Gun Lawyer” Frank Avila, Gloria Ranelli, Frank Musillami, and Debbie Horn, of Park Ridge, Illinois. Frank Avila is a Political Pop Star. The event was a SEIU/Frank Coconate, Northwest Side Democratic Organization Rally. Photos By Patrick McDonough. Fally on March 10, 2006 at Park Ridge V.F.W. Hall.

This is Randall Sherman the Secretary/Treasurer of the Illinois Committee for Honest Government. Randall is also a Television Producer since 1990. He has produced shows with Frank Avila, Frank Coconate, Mick Dumke and the “SuperStar” Patrick McDonough. The shows were very informative and are seen on CAN-TV in Chicago. I do not know people with as much political information as Randall. He is a Chicago Treasure. Contact Randal at: shermanrandall@hotmail.org Clout Rating: I am Biased, I respect Randall greatly. 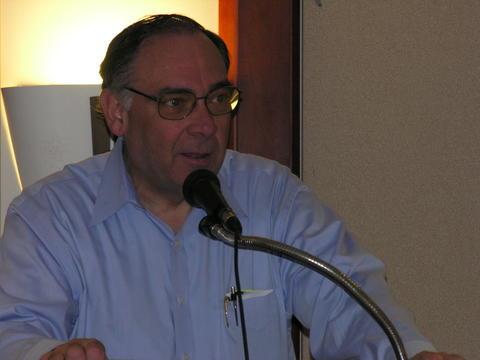 On March 18, 2006, Plumber’s Local 130 Business Manager, James Sullivan, thanked all the Plumbers that showed up for the Political Action Task Force. At the Plumber’s Chicago and State mandatory required licence four hour renewal class, James Sullivan requested 500 Plumbers for politicking. On Saturday, March 18, 2006 only about 55 Plumbers attended to pass out Political literature. After Tom Dart, a Sheriff Candidate spoke, we went politicking in the 47 ward. I asked some Union Local 130 Plumbers from Chicago why the light showing, I was told since Mayor Daley’s Hiring Scandal, Local 130 cannot get Chicago city jobs on union clout anymore, so why do politics. The old Business Manager, Gerald Sullivan, could get city plumbing jobs for it’s members. Also Local 130 does not go to bat for it’s members that are employed by Chicago Water Department. Clout: Union money, losing clout quick.

I met mark Brown in 2003 in Andersonville, I spoke with Mark about the Corruption in the Chicago Water Department. (Chicago Water Management). Chicago changes names of departments after the Feds go through and clean them up. Mark Brown is a well respected writer in Chicago. If you wish to tell him your story, be prepared, be organized , and be honest. I assure you what makes Mark Brown great is he looks right through the person and into your soul. Do not call Mark Brown if you think you will b.s. him. Mark Brown in my opinion, made the “Hired Truck Scandal”, unravel into what it is today. Patrick D. McDonough.
Mark Brown Clout Rating: Highest and Deserved.