The Maine Township Republican Club and Patrice McDonough, a Des Plaines 6th Ward Candidate for Alderman was invited to join this Suburban Political Powerhouse. Many of Des Plaines top candidates were invited to attend this event at the Heritage in Des Plaines. A question period followed. During the event a fire alarm went off and I still have a headache from the noise. The event was a great success. Patrice McDonough was invited to become a member. Remember you can become a member if you call, 1-847-296-1474. From the left pictured is Carolyn Simmons, Beth-Su Anderson, Andrei Nankervis, Kathernie Gans, Patrice McDonough, Cora Thompson, Mary Childers, and Irene Ruckoldt. The Maine Township Womens Republican Club was founded in 1944. Photo By Patrick McDonough.

Patrice McDonough, the next alderman of Des Plaines 6th Ward won another endorsement from Commissioner Frank Avila Sr. The Commissioner is the only person on the Metropolitan Water Reclamation District board that is a professional engineer. Patrice will work with Commissioner Avila to ensure the Des Plaines flooding issues are handled in the taxpayer’s best interest. Commissioner Avila also was at Patrice McDonough’s “Meet and Greet” to address any questions the residents might have on flooding issues. Host of the event was Frank Avila Jr. a famous Attorney. Patrice also won the coveted endorsement of The Illinois Committee for Honest Government and J. Terrence Brunner, the former leader of the Better Government Association. Des Plaines will have an Alderman with the experts to work through the flooding issues. Photo by Patrick McDonough.

Please read this article by Gary Washburn: http://www.chicagotribune.com/news/local/chi-070329bribes,1,4353997.story?coll=chi-news-hed We warned you a while ago about why Chicago does not promote honest employees. Most of the plum positions go to 11th Ward insiders that understands pay-to play. Mayor Daley should have flown in from his vacation to take responsibility. He is ducking out to avoid facing the music. Do not think this investigation is over, not by a long shot. Mayor Daley get back home and face the press. Patrick McDonough. 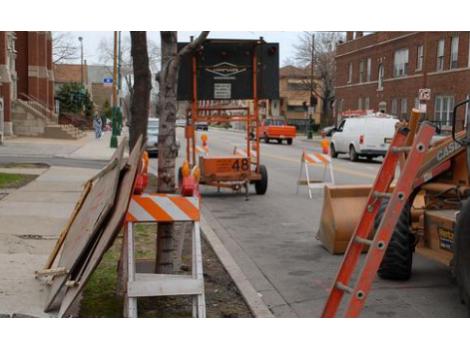 Please enjoy this picture of a sub-contractor of the City of Chicago. The company is Highway Safety Corp. They are located a 1756 Armitage Court Addison, Illinois. Hey Chicago Citizens, why do we keep hiring non-union companies that are not located in Chicago? Some of the guys working in the back of the barricade truck couldn’t speak English and kept trying to unload more signs that were not needed. Chicago Taxpayers are paying for signs that are not used. We need a proper way to review what we are paying for, and pay these workers a union wage. P.S. Chicago spends millions on renting backhoes also. Why not buy? Photo by Patrick McDonough.

William Grant served the citizens of City of Chicago with honor. I hope this picture says something to honor our lost hero. If you know of a fund to help his family please e-mail me. Photo by Patrick McDonough.

Many politicians need to know who to trust with getting the word out. You need someone with experience and can get the job done in a timely manner. I called around to many political printing companies, I asked Chicago political experts Frank Avila and Ivan Tomic what is the best of the best. I settled with my hard earned money and used American Campaigns a professional Union shop. I spoke with Tom Hendrix the Vice President, and he assured me the product will be professional and completed in a timely manner. The shop is located at 5333 West Lake Street Chicago, Illinois 60644 Phone 1-773-261-6800. If you want to win an election, you must make a professional appearance with all signs and posters. I learned today the company does mailings and other services. Click here for their website: http://www.electionhelp.net Picture of Tom Hendrix by Patrick McDonough.

Dear James Sullivan, Tom Durkin, and Tom McManus of Plumber’s Local 130, please read this article, click here: http://www.suntimes.com/news/politics/311107,CST-NWS-bribe24.article or this version, http://www.chicagotribune.com/news/local/chi-0703240116mar24,1,3755966.story?coll=chi-newslocal-hed Well, I guess the crazy way things have been presented to you years ago are coming back to haunt you and our fine Chicago Union.
Every promotion at the City of Chicago was rigged for years and nothing was done. You allowed grievances against Chicago City workers to be tossed away. You allowed certain plumbing companies a pass on agreements. You allowed “Caulkers” to give orders to Licenced Plumbers. You allowed “Caulkers” promotions over Licenced Plumbers at the City of Chicago. Why did you allow favored “Caulkers” to obtain Plumber’s Licences at phony Licence tests. Plumber’s Local 130 lost the right to administer tests for years and still forgot why. You promoted Plumbers too crippled to make an actual inspection. It is time for Plumber’s Local 130 to answer some questions to Patrick Fitzgerald. Remember Local 130 a “stack” ain’t worth the time. Gee, did we tell you about this story a while ago? Yes. Hint on more busts in route, TAP, TAP, TAP, I am not talking about dancing. Patrick McDonough.

Patrice McDonough, the next 6th Ward Alderman in Des Plaines, Illinois, won the coveted endorsement from Commissioner Anthony J. Peraica today. Commissioner Peraica attended the “Des Plaines 6th Ward Meet and Greet”. I hope all of you will be ready to hear all about the upcoming corruption investigations soon to make the major Chicago Newspapers Headlines, thank you for your continued honesty Mr. Peraica. Commissioner Peraica had run a incredible campaign for Cook County President. In excess of 150 people attended the event, the first of it’s kind in Des Plaines. The “Meet and Greet” was very well stocked with music, food, professional sound system, and refreshments. A real class act. The outgoing Alderman was seen driving around the event said a Des Plaines Firemen. Everyone had a chance to address the audience. The Event was hosted by Frank Avila, a famous attorney and friend. Patrice also was endorsed by the Illinois Committee for Honest Government, the Aviation Integrity Project, Terrence Brunner, the former head of the Better Government Association. Bryan Doyle was on hand to explain the issues affecting Des Plaines and the O’Hare Airport Expansion Project. Patrice McDonough also won the endorsement from Commissioner Frank Avila Sr. from the Water Reclamation Board. Nice going Patrice McDonough. Photo by Patrick McDonough.

Dear City of Chicago employees, many of us have worked very hard to expose the corruption we worked with for years. As many of you know, money has been put aside to remedy the practices of many departments. I am happy to report, one of the top law firms will review your case and assist you in preparation of your paperwork. If you have lost promotions, overtime, and been transferred as part of Shakman Violations, I suggest you contact http://www.loevy.com/ Remember, if you think you will file some papers and get a fair amount, you are wrong. Lawyers talk to Lawyers. One of the Attorneys at the firm is Jon Roseblatt, he is one of my lawyers. Feel free to contact me and I will help you. For more detailed information on Shakman Decree updates click here: http://www.shakmanmonitor.com/ Patrick McDonough.

I wish to congratulate Frank Avila Jr. in what might become the final blow ending a ten year war. See channel 2 video, click here: http://cbs2chicago.com/local/local_story_081142205.html Frank Avila Jr. a well known Chicago Attorney also got into physical confrontations with Al and company and won court cases against these gang-bangers and political thugs. Simply stated, the HDO boys wanted all the overtime, all the promotions, all the jobs, again and again. Working in the Chicago Department of Water Management, I saw what was going on for years, filed grievances, and nothing was done. Mayor and John Daley figure into this group with no doubt in my mind at all. Frank Coconate was a victim of these power-brokers. Well every dog gets his day and I suspect if Al has any common sense he will cut a deal quick and give up the Daley Family Clan. I want to give a complement to Ron Huberman’s office on resolving a minor problem today and insisting the Central District yard continues receiving a much needed face lift. I hope all the Cable Access Shows helped the Feds as we brought out lots of information. Today I was at the Chicago Police headquarters in Chicago and wish to thank them for the wonderful experience. Patrick McDonough.