It was not long ago when the Chicago Sun-Times uncovered Mayor Daley’s Hired Truck Scandal. The driver on the City truck when Mark Brown of the Chicago Sun-Times was snooping around was Joe Lopez. Joe Lopez was accused falsely of not being on the jobsite and was punished. Joe is still looking to clear his name. Joe always worked hard for the City of Chicago and enjoyed his 34 years as a trusted employee. Joe looks about ten years younger after he retired thanks to less stress and visits to Mexico. Maybe someday Joe can clear his name. Joe never knew the Hired Truck Whistleblower, Patrick McDonough was tipping off the newspapers and the FEDS that day. Joe is glad the city gave him an opportunity for the job. Joe misses all his friends and loves them. Joe also says thanks to his friends in the Sewer Department. Joe had a great going away party at the Sunnyside trailer his last day. Joe still misses all the guys. Photo by Patrick McDonough 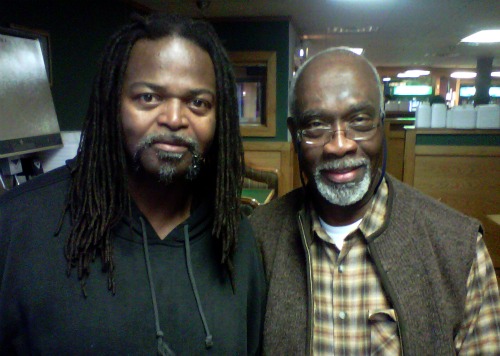 Terry Hillard is Chicago’s Police Superintendent again. I caught our Superintendent at lunchtime, but he still took time for a couple of pictures. Terry is a real class act and a credit to all Chicago Police officers. One of the few things Mayor Daley ever got right. Al Treadwell, an Investigator for the Department of Water Management, is very happy with Terry’s leadership. Photo by Patrick McDonough.

As Chicago rots all the way to the core, Daley had the coconuts to have the final walk of shame. The Chicago Sun-Times wrote Daley got many complements, but they failed to report the many jeers and insults. The Saint Patrick's Day parade was loaded with hundreds of union tradesmen struggling to make ends meet. Many of the Chicago Unions have allowed work to go non-union due to laziness and lack of organizing. I don't think it is a surprise, the unions that organized during the construction boom, brought in many unskilled and incompetent workers. Many of those workers are still paying dues to the unions and sit on the bench. Somehow the plumber's union has devalued the plumbing license by this activity. Many "Rooter" and "Caulker" types now have a plumber's license. These hustlers are working and the formally trained apprentice and journeyman starve. Many Chicago Union plumbers long for the leadership of Gerald Sullivan the greatest Manager of the Plumber's Union. Many of these plumbers worked on the Rahm Emanuel Mayoral campaign are hoping for a payoff. Plumber's Local 130 is still reeling from the damage of supporting Hynes for Governor. Politics may help James Sullivan and the leadership of the Plumber's Union but the members continue to complain to me. It is a matter of supply and demand. If you wonder why I have taken a rest from this blog, it is because I am trying to keep an open mind on the Rahm Emanuel transition. The damage Daley and his goons have done to Chicago will take a generation to repair. I do look forward to Amy Rule as first lady of Chicago, it seems like she will not make money off the position and give her family the guidance to keep them from making a joke of Chicago. We might also have the first Jewish St. Pat's Queen in Chicago. Keep in mind John Spatz is having a retirement party March 18, 2011, he taking a better job in DuPage. Contact me if you want to go to the party. I will get you in contact with the Department of Water Management staff that wastes all day preparing these parties on the taxpayer's dime. I hope these political workers also leave with John Spatz so Rahm Emanuel can get ahold of all the contract scams still plaguing this department. Patrick McDonough

If you know Alderman Pope in Chicago, make sure he stops by Chicago Clout TV Show we have some questions for him. What a Luci Goose he is. The Chicago 10Th Ward never really gets it! Mayor Daley friends pick up their coke in that ward!