Chicago’s Richard M. Daley intends to turn many buildings, bridges, and public property, into a billboard for corporations. Everything is for sale in Chicago. It is a disgrace the poorly run city must take drastic steps to hustle up money. My suggestion is to sell the name of the Richard J. Daley Center and the James R. Thompson Center up to the highest bidder. But would Chicago’s little mayor go for that? Our upcoming series is called “THE BRIDGEPORT CUT”. Please enjoy some of my best research into Chicago Corruption. Photo by Patrick McDonough. 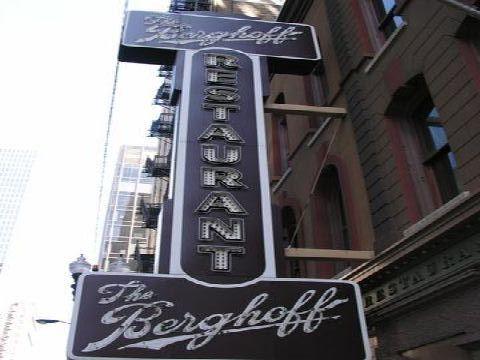 Chicagoist had an spot about the Berghoff Restaurant closing. Not to brag, but I commented it is an attempt to bust the union on December 29, 2005. I wrote about “first class union waiters”. Today’s Sun-times said the restaurant is open non-union. Chicago’s leadership have become selfish and ignorant to basic human needs, a fair paycheck. Unions are too embedded with Management. Photo by Patrick McDonough

Austin Civic Organization is in a fight against Loretto Hospital. Lets face it, the Austin neighborhood is in terrible condition. The Austin Neighborhood is the prime example of what the Millenium Park is not. I met with a brilliant man with passion to make a difference. His name is James T. Smith. He is picketing Loretto Hospital as they intend to receive a TIF benefit of 46 million and 98 million dollars. As I have discovered in the past, everything with the Daley organization is not in black or white. Mr. Smith wants the money used for Austin schools that are in disrepair. The school system is a wreck and the Chicago Public Schools Performance Assessment testify the results of Arnie “Herman Munster” Duncan failures. Contact James T. Smith at sowyouthoutreach.tripod.com or call 1-773-626-1451. TIFs are in need of investigation by the F.B.I. Patrick McDonough 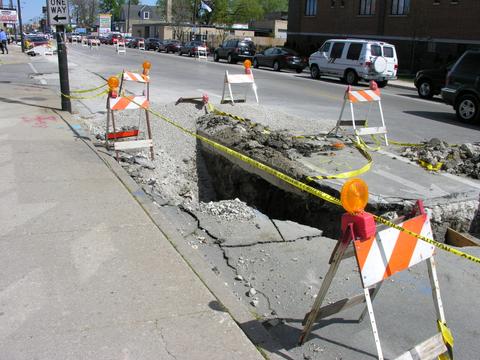 Tom Laporte said Chicago Department of Water Management follows Safety Laws. On April 25, 2006, I made numerous photos of a job site in front of 4626 West Lawrence and 4480 West Lawrence in Chicago. The photo shows no safety or concern for people walking with-in inches of the project. Not a single piece of shoring on the project. The Illinois Department of Labor knows about this. The Inspector Generals Office is not concerned. Look close, nice safety tape job? Lawyers get rich, workers get hurt, taxpayers get screwed. Photos by Patrick McDonough. 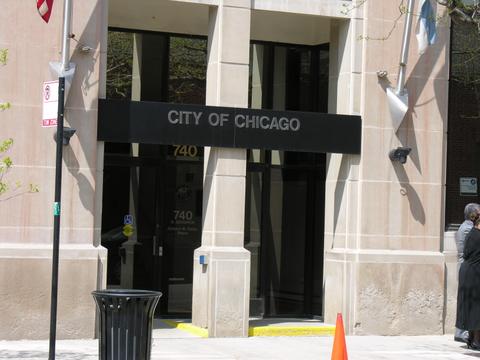 With regret, after over a year of intense investigation, my recommendation is to terminate the political investigative arm of Mayor Daley. The Chicago I.G. is wasting money on rental cars, wasting money on gas, and is not doing the job us taxpayers expect. To date, David Hoffman has still not contacted me after repeated attempts to have procedure reviewed. I have followed his army in Revenue and Streets and Sanitation vans waste time doing nothing, with two hour lunches. Fraud inspecting fraud. Let me explain the procedure the I.G. uses in Chicago. Example one, The inspector General takes a complaint about a department, next the I.G. writes up a report, next the report is given to the head of the offending department, (Brian Murphy, of Department of Water Management), than a “Confidential” letter is made and the report is sent to John Zander. If you read the “Role of the Inspector General’s Office” as set forth by municipal ordinance, the department is in crimianal violation of the ordinance. As I have stated before, the Inspector General’s Office is engaged in Fraud and Retaliation. Do not call the Inspector General’s Office, call the F.B.I. at 1-312-431-1333. The I.G. admitted your identiy is revealed to department heads. Photo 740 North Sedgwick, Chicago. Photo by Patrick McDonough.

Mark Brown of the Sun-Times had a great article on April 25, 2006. It is called “11th Ward election high jinks have John Daley crying foul. John Daley is not “dicking around”. I suggest John Daley not waste his energy and find out how William “Bill” Chambers got a plumbing position with the county after 30 years with the City of Chicago Department of Water Management. Bill was allowed tons of overtime when everyone else got shut down. Pictured Frank Avila, Richard Remus, and Frank Coconate. Photo by Patrick McDonough.

On April 24, 2006, Chicago Federation of Labor was at the Haymarket Riot Monument to review Immigration Reform. Dennis J. Gannon gave a great speech. Tom Stiede of Teamsters District Council gave a fiery speech. Jorge Mujica gave a strong passionate speech about respecting hard working immigrants. It was great to see many Union leaders at the forefront of this difficult issue. Some unions guys could not attend as they were busy getting their car washed. Dennis J. Gannon Clout Rating: Yep got Clout. Photo by Patrick McDonough. 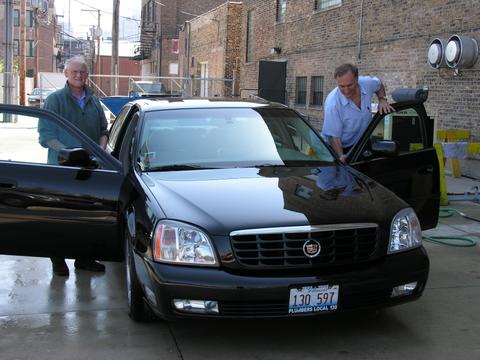 On my way to the Haymarket Riot Monument, to attend a Union Rally to support the Immigration rights movement, I noticed two Plumbers Local 130 maintenance men washing the Business Manager’s car. Since I am also a member of Plumber’s Local 130, I thought for a second about getting my car washed also. Union Management is a fine line away from Management in Chicago. Photo by Patrick McDonough.

Commissioner Tony Perica was working the South Side of Chicago, on April 22, 2006, to bring aware to the Black Community his views on the issues. Pictured is the lovely Ms. Joyce and her two handsome sons, and Commissioner Peraica. Dave Madlener told me it is a matter of “Asking for the vote”, and “Showing Respect”. Tony was presented an award from Frank Avila for his Honest Government Service earlier in the year. On a personal note, Tony is very classy and down to earth. He always has a nice word for everyone. Contact the campaign at these numbers: 1-708-344-1600, 1-773-735-1700, or 1-773-684-1909. On line, www.VoteTony06.com Tony Peraica Clout rating: Plenty and getting steam. Photo by Patrick McDonough

Commissioner Tony Peraica is running for Cook County Board President. On April 22, 2006 Tony was working the Stroger neighborhood. The picture was taken at 86th street and Stoney Island in the south side of Chicago. I wish the following the best of luck, Commissioner Tony Peraica, David Madlener, Randy Alesia, Patrick, David, and Michael McDonough, and Ray Clark, office manager of Peraica office at 1862 E. 75th Street Chicago, Illinois 60649 phone 1-773-684-1909. Please visit www.VoteTony06.com Tony Peraica is a class act and was always a gentleman to everybody, Good luck and God Speed. Photo by Patrick McDonough.