May 6th, and 7th, 2021. The Chicago 19th Ward was hit again with another shutdown of the Roseland pumping station. This has gone on several times. The 19 Ward was under a boil order which again shows the failures of Mayor Lightfoot of Chicago. The Chicago Department of Water Management has been warned by Chicago Clout about the lack of proper maintenance at Chicago pumping stations. The Eugene Sawyer water purification plant had a massive surge just prior to the pump failures. No excuse Mayor Lightfoot. Will this crush the private water deal made with Joliet? We will find out.

The 19th Ward had an emergency response from the Andersonville neighborhood. Two pallets of water from Costco were delivered to senior citizens centers from Patrick McDonough a City of Chicago Plumber and State Certified Plumbing Inspector, currently on unpaid disability. Also, Justin McDonough, son of Gregory McDonough (deceased) and former DOWM Plumber Central District swung into action, delivering yummy Costco Kirkland water so 19th Ward Seniors can reach Alderman Matthew O’Shea if they need potable water. It was a generous gift from Justin who lives on his disability payments. Justin has Cerebral Palsy, but that did not stop him from helping. Also special thanks to retired Plumbing Inspector Michael McGann for making this large and generous offer. Michael McGann purchased a state of art trailer to make emergency response possible.

Patrick McDonough is now part of the Plumbers with no Borders organization and their first Plumbing Inspector. “I am hoping to reorganize the Department of Water Management to have a rapid response team to provide water when pumping stations go offline, said Mr. McDonough. special thanks to the 19 Ward Office Staff (Kelly) that had to unload the water due to the disabilities. If you would like to join our rapid response team, please contact us.

The City of Chicago is under strain due to the incompetence of Mayor Lori Lightfoot.

Mayor Lori stirred the racial pot with her broomstick. Day after day, Lori works the media, turning negroes against honkeys. Hispanics are coming to Chicago from Mexico due to lazy negroes that refuse to work. Lori needs hard working Mexicans to pay her high taxes.

Just recently, Ms. Cheng was promoted. She is the tempory commissioner. If you look at the past in Department of Water Management history, the acting position almost always leaves you homeless. In fact, whistleblowers have ruined more careers than crazy Lori.

So far, Ms. Cheng is part of the Joliet one-billion-dollar deal that is riddled with fraud and corruption. Not even Joe Ferguson can figure out he is being used by Lori.

Many City of Chicago Department of Water Management employees were part of an optical illusion to again fake the public. Lori was untrusting of her negro voters to behave after the George Floyd court room drama. Lori worked with Chicago Laborers and Teamsters to provide safety and security in case or riots. Lori was going to look out all the negroes from downtown Chicago. Lori ordered Ms. Cheng to place multiple pick trucks, licensed in Ohio, to act a barrier. Lori figured out it would be a good idea to have non-police in place because she is a weak woman that can not stand up to these creeps.

Since this was a safety matter, Lori forgot to send Ralph Chiczewski to monitor the workers that have no police training. Ralph did nothing but sit at home with his DOWM car in Edison Park and allegedly figure out what employee was exposing his penis to the public. Fortunately for lazy multi-pension deadbeat Ralph, armed persons were monitoring the Laborers and Teamsters sleeping on the job. The Inspectors were at 18th street staging, East McFetridge Drive at the Field Museum, Oak Street and Lake Shore Drive, (my neighbors at Drake Apartments were pissed) and the heavy sleepers at Belmont. Missing were the North avenue sleepers and the southside boys. If you were on this detail, please have your union rep to contact us for your pictures. If you do not want them, I will send over to the appropriate authorities.

Please note, when you are at work making time and one half and double time, put down the phone and keep your eyes open. These jobs would have been fine for crippled workers not paid their workers comp benefits. Funny how Cheng got her job by allegedly backstabbing Conner, but he was a damn idiot anyway.

Department of Water Management, stop stealing out in the open. People are at home with no food and no job. You spit in their face.

Mayor Lori E. Lightfoot has made extra hundreds of thousands of dollars while employed as Mayor of Chicago. Currently, Lightfoot has been paying millions of dollars in overtime to many departments to keep the wild negroes out of downtown Chicago. Many of the protestors are honkeys and unemployed Hispanics. The damage in the last few protests have been awfully expensive. Lesson learned? Make money, all you can.

Thanks to Lori and Amy, expenses are going through the roof in Chicago.

Lori quickly learned the same tricks Alderman Burke learned decades ago. Pass the money around and the unions will finance your reelection. Lori is becoming a master at it. When Lori ain’t playing around with racist stories and making a national idiot of herself, she is neglecting Chicago citizens in a God-awful situation.

Today, April 23, 2021, a lonely old citizen was getting removed from her residence. The lady was bombarded by Chicago Police Officers, the Health Department, the Building Department, and private contractors. The lady’s bags were piled on her front porch. Multiple do-nothing city employees walked around with cold hearts. They are boarding up her place and she will live in the gutter. This was in the 1400 block of Winona. You are next

Many neighbors gathered to give hugs, but one offered a free place for her to stay. Only a pig like Lori could be worried about her ugly face on Facebook and making national news. All the lies about progressives are exposed now. Lightfoot routinely steals injured city workers comp benefits and gives the money to lawyers that give her kickbacks.

So much for compassion in Chicago. Chicago is a shithole thanks to Lori. She is more worried about George Floyd, so she can gain power. What a fuking biach.

With a new acting commissioner, that is a woman, the male urges might not be allowed. With all the sexual harassment charges against Chicago City Workers, you might want to put a quick end to the parade of lawsuits. Many Chicago Department of Water Management bosses have sexual harassment charges against them. This is being tolerated. We will release Lori’s transgressions soon. Let us put it this way, when Lori Lightfoot goes to another city to do business, she does it all.

I hope this employee gets his job back, acting like a JAGOFF is not the end of the world in Chicago. This dude work HARD and busted a NUT for Chicago taxpayers. This driver was not a STROKE. When his crew needed a LOAD, he always delivered. Maybe the Chicago Teamsters will help this dude, he was a cream of the crop workers. If the Inspector General investigated, he would blame the person looking into the truck.

I only think anyone looking at a picture of Lori Lightfoot should be fired. That is rough.

On April 21, 2021, the City of Chicago continues to misuse the Chicago Department of Water Management trucks and workers to play policeman. Chicago is a nightmare thanks to Inspector General Joe Ferguson, still allowing Mayor Lightfoot to misuse her office to promote her racial and political agenda. The Chicago Water department employees are sitting ducks in case crazy negroes and retarded BLM agents decide to storm the Chicago beaches. I really doubt the #BLM protestors are going to allow trucks stop them since you can easily walk past them. I really doubt BLM protestors will go to Chicago museums to start trouble.

According to top Union officials. Lightfoot made an agreement with two Chicago Unions to provide labor if they provide her with donations to the democrat party and her reelection campaign. Pay to play rules Chicago. It always will.

Lori Lightfoot always controls the message; She is still refusing to honor FOIA requests. Lori is a commie and a failure. Biden is using national taxpayer money so Lori can have her political message sent everywhere.

Pleasse note, everyone of these workers did a great job and were attentive. They worked smart and safe. They did as ordered. 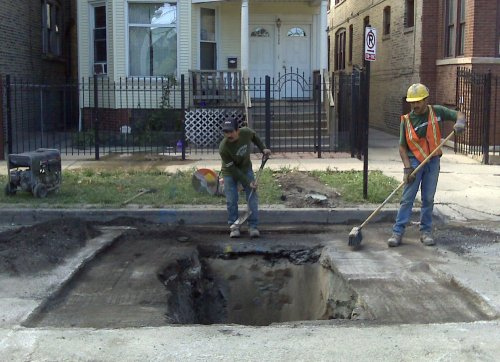 I could never understand how Mayor Daley and his pack of goons can allow work that should be completed by Chicago City Workers, to be farmed out to private contractors. This company said they are Joel Kennedy Construction Company. Their trucks have no lettering or have lettering with false addresses, of course, that depends on the way the Chicago Office of the Inspector General determines residency. None of these cases have ever been prosecuted. In fact, some former employees retired from the Chicago Water Department and went to work for privates in Lake County. These companies need to be investigated for compliance. Chicago City workers are taking furlough days at great expense to their families. Private companies from other counties take our work; enjoy lower taxes, better roads, and less corruption. I think that is why Mayor Daley has a residence in Michigan. Why would Daley farm out the sewer program to these companies? When will the Inspector General investigate these companies? Many of these companies have a P.O. Box and the mail is forwarded to the suburbs. On this job, the company did not have a permit. They started work without a permit. The boss came out with Wisconsin plates on his pickup. He said this is emergency work, like the Nativity of our Lord emergency work? I never heard of a private company allowed to start a job without a permit in a municipal environment. But this is Chicago and Daley is the most corrupt person to ever serve office, period. This is a scam, pure and simple, it leads to using privates to complete work for the Commissioners friends and Alderman’s donors on the taxpayer’s dime. We need to Feds to raid the Jardine Plant again. The Chicago Department of Water Management might have found a new Hired Truck Program. I am still waiting to take a prosecutor on a three-hour drive to explain the scam in detail. Photo by Patrick McDonough