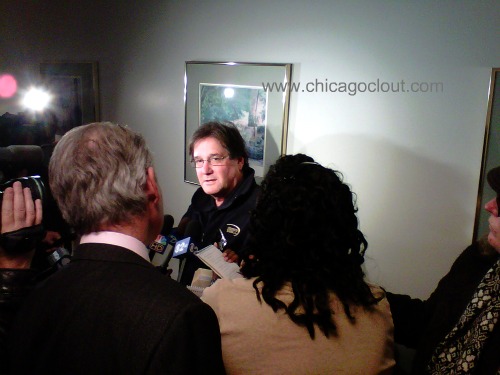 Looks like Jay Levine of CBS2 shook Jan Schakowsky out of her hidden addenda to support Rahm Emanuel for Mayor of Chicago. It took objections filed by Patrick McDonough and Election Attorney Burt Odelson today. Maybe Jan Schakowsky is really concerned because the North-side Democrats already made the deal to support Rahm. It is no secret the wards that violated the Shakman Decree, used political muscle, corruption, and criminal activities had the deal signed long ago. Most of these ward goons never admit who they support because they cover their bases and are cowards. In a video at the Chicago Columbus Day Parade, Chicago Department of Water Management no-show employee and double dipper, John D’Amico was following Rahm Emanuel around like a lost puppy until the TV cameras showed up. The State Representative and part of the Laurino clan knows the deal was set a long time ago. If you think about it, Jan has no business worrying about the Chicago Mayoral race at all. She is just covering her rear-end when Daley steps down and all the hiring and contract fraud is exposed. Rahm will allow the statute of limitations to expire. Just remember this Chicago Voters; Rahm Emanuel is at a big shot basketball game in California texting to all his friends in the Chicago media business. The rest of the Chicago Mayoral hopefuls were serving Chicago homeless a thanksgiving meal. Rahm is not a resident of the City of Chicago. I also made a formal complaint to the Chicago Office of the Inspector General a few days ago about Rahm. Chicago city workers were fired despite the fact they lived in Chicago in residency claims they could not afford to appeal. We demand the Office of the Inspector General make a ruling as to the law regarding Rahm’s residency. Enough city workers have been fired for less, you cannot have it both ways Jan and the OIG. I will have more on the Rahm inside deals soon, not now. Photo by Patrick McDonough